Possibly my best interview ever 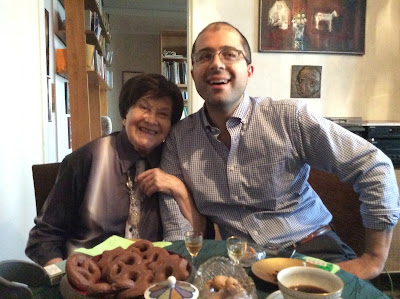 I've been away in Prague to meet the harpsichordist Zuzana Ružičková [from whose name a few accents are probably still missing]. She will be 90 in January and her recording from the 1960s-70s of Bach's complete keyboard music is being released on CD for the first time to celebrate her birthday (on Warner - more details here.)

Her most famous contemporary student, Mahan Esfahani, was there too - and, as you can see, we had the sort of fun time that people don't often associate with harpsichords. But that's these guys all over: the sort of joie-de-vivre and sonic imagination that bounces out of their playing can make you think this supposedly rarified early keyboard is the queen of all the instruments. I've been having a sneak preview of the Bach discs and they are a revelation.

Zuzana survived Terezin, Auschwitz and Bergen-Belsen. She and her husband, the composer Viktor Kalabis, then had to contend with the communist directives of the Czech Republic. And then came the early music movement. We talked all afternoon. Full results due out in the next little while.

Prague is possibly the most beautiful city I've ever seen. And interesting, too, to note that it was here that Beethoven had his famous rendezvous with his Immortal Beloved, supposedly on 3 July 1812. More of that soon, as on Saturday I'm off to the Midlands to speak about this extraordinary history at the Bromsgrove Beethoven Quartetfest, during which the Dante Quartet is playing all the quartets.
Posted by Jessica at 9:43 am