Russian around: Tchaikovsky goes to Victoria 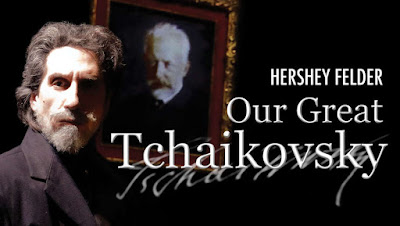 I have to doff a respectful cap to writer-actor-musician Hershey Felder. To create a one-man show in which you personify a composer, tell his story, play his music and hold the stage all alone for 1hr 40mins takes not only talent and charisma but a few shedloads of damned hard work, and in Our Great Tchaikovsky - the multitalented Canadian performer's latest musical incarnation, following Gershwin, Bernstein, Chopin, Liszt and Beethoven - he does all of this with enormous aplomb, plus Russian accent.

The show, which is directed by Trevor Hay, has just opened at The Other Palace, a theatre I thought I'd not been to before. And I'd been wondering what happened to the St James Theatre. Turns out the latter was bought up by ALW's theatre company and has changed both its name and its aspect. A mission statement from Lloyd Webber in the programme explains that it's now a space for burgeoning, experimental music theatre of all kinds. And its atmosphere has undergone a sea-change. It's buzzing, and it attracted a good, strong audience of non-specialists to see Felder become Tchaikovsky, and I have to doff a cap to that as well, because getting general audiences along to shows about classical music is not a walk in the park.

Nor was the performance, entirely. Felder, with vast flair, brings us Tchaikovsky's life history, with all its anguish, fear and hints of scandal, switching persona in a twink from the young-gay-about-town Pyotr Ilyich to his mentors and nemeses: a portly Balakirev, a whine-toned Nikolai Rubinstein. The setting evokes Tchaikovsky's home at Klin: wooden desk, samovar, rug, and a backdrop of birch-forest which soon comes to life thanks to clever digital animation. A portrait frame's images change according to where we are in the story: mother, Nadezhda von Meck, beloved nephew Bob and the famous scowl-eyed portrait of the composer himself all appear in due course. The background conjures a range of visual treats: animals in the forest, New York in the snow (The Nutcracker was thought out on its streets when our composer went there to open a new concert hall built by Mr Carnegie) and mountains transforming into a flight of swans as Swan Lake music accompanies some pertinent information about the Sochi Winter Olympics and the policy of the Russian government towards homosexuality since 2013.

The show is certainly aimed at an audience unfamiliar with Tchaikovsky's personal story and Felder has handled its thorny, uncomfortable aspects with admirable clarity: upfront about the mystery of his death, fairly explicit about the composer's affection for young boys, and even more so about the relevance of the unfortunate man's personal history to unwelcome developments in the present day. He's crammed in a lot. Most of the important pieces get at least a passing mention and considerable chunks of music are heard throughout, some recorded, more in the powerful hands of Felder at the piano, meshing words and music to the manner born.

The only thing is - and this might not bother everyone, but it bothers me because of my pianoy side - Felder is a smashing actor, but rather too smashing a pianist in not always the best sense. He can certainly play (back in the '80s he studied with Jerome Lowenthal, among others), but he has a slightly bombastic touch, and many were the moments when I wondered if there might have been another way to approach this theatre piece: namely, by collaborating with a second person who would serve as full-time pianist? This worked extremely effectively for Mikhail Rudy's adaptation of The Pianist, in which Rudy plays and an actor (I saw the splendid Peter Guinness) inhabits the script and the whole is bound together with excellent direction (if I remember right, as it was some years ago, it was Daniel Kramer). In Felder's one-person-does-all account, though, there's possibly a bit too much playing - and, crucially, it slows the pace of the story. One might lose 15 mins with judicious cuts, upping the tempo and introducing, potentially, some interesting interactions that would enable Felder to concentrate on the drama and deepen the complexity, the pain and the shocking elements (of which there could be many more) of the heartbreaking tale of Pyotr Ilyich.

Having so said, there are moments at which the juxtaposition of different pieces of music makes a dramatic point even better than the words. The contrast between what felt like an endless extract of the ghastly 1812 Overture (even Tchaikovsky hated it) and the simplest, tenderest piece from the Album for the Young proved in a few seconds that there's more genuine feeling in one phrase of the latter than in all the lurid crashes, booms and fireworks that went before.

Anyway, do go and see it. Now running to 22 October. https://www.theotherpalace.co.uk/whats-on/hershey-felder-our-great-tchaikovsky