Dubai or not Dubai, that is the question

When the composer Joanna Marsh moved to Dubai, she found her whole perspective shifting towards life, music and more. She has just written a new piece to mark the 100th anniversary of women's suffrage in Britain, with a libretto by David Pountney - Pearl of Freedom, being premiered at St John's Smith Square tomorrow - and I was keen to get her to tell us a bit more about writing on a feminist topic from the Middle East. Here's our e-interview.

JD: What prompted you to write a piece about Emily Davison in particular? And how did this opportunity come your way?

JM: Emily Davison was actually part of the brief. Rupert Gough, (the current Director of Choral Music Royal Holloway, University of London) came to a performance of mine last May and mentioned that they were planning to commission a piece to coincide with the anniversary of the Representation of the People Act as Emily Davison was an alumna of the college. He asked whether I was interested.

JD: Your librettist is David Pountney - what was it like to work with him? Please could you describe the collaborative process?

JM: This is the second piece I’ve worked on with David and it felt completely different to the last one. We had a few conversations about which were the best research materials were, I sent him a book or two that I had come across and we looked through various films and bits of footage footage. He came up with the idea of using the extracts of diaries, news reports and anecdotes to recount the events leading up to the Epsom Derby of 1913 with very little, if anything, invented. There was a huge amount of material to choose from. Most of our discussions were about what could be cut without great loss. It was all very calm and considered.

Not so the piece before which was the first time I worked with David, on My Beautiful Camel. This was a wacky comedy set in Dubai; a story I had devised with the new Dubai Opera house in mind. His libretto was a triumph of wit and humour and his experience of a lifetime in opera meant that the structure was great and did all the right things. (That has been a great bonus of working with David actually; he is brilliant on what will and won’t work dramatically). However there was quite a lot of toing and froing over the characters and their behaviour; what they would or wouldn’t be likely to do or say in the UAE etc. And there were a few really rude words that I kept trying to edge out but he wanted to keep in. He did eventually agree to dial down some of the sweariness but I felt weirdly square having those conversations. Swearing wasn’t really an issue with the Emily Davison piece!

JD: Musically, how have you approached the project? What were the biggest challenges in it for you? And has it developed/extended/changed the way you compose at all, and if so, how?

JM: From conversations I have had with colleagues I think most, if not all, composers sit there at the beginning of the composition process trying to remember how to begin. The process feels oddly unfamiliar every time. I find it very similar to a chess game. You start with an opening gambit and a rough idea of what might follow but you can’t see all that far ahead. The landscape can change in an instant as you realize you need to follow up on certain ideas and leave aside others you had thought might work. But having eight episodes of text in front of me was helpful with Pearl of Wisdom. It was visible on hard copy where the moments of greatest intensity needed to be, where the momentum had to build or relax. The conundrum was how to create a piece that felt musically balanced.

Every piece provides its own learning process: you are saying something you have not said before, it is always new terrain.

JD: How does the work fit in to your output in general - for instance, are feminist topics recurrent for you, or is this the first time you’ve tackled one?

JM: I haven’t worked on a piece with a specifically feminist topic before. The only piece I have written with political overtones was The Tower, for choir and brass, which was about the Burj Khalifa. I had just arrived in Dubai and felt ambivalent towards the place at that time. The Burj was only half constructed and something about its vast, monolithic hulk drew to mind the former greatest tower of the Arab world, the Tower of Babel.

For the text I made an amalgamation of different sources that recounted the construction of Tower of Babel by slaves in their thousands. Some of the texts were rather hard hitting, for instance one spoke of a woman having to give birth and keep on working at the same time.

How did you come to be based in Dubai and how do you feel about living there?

JM: I wasn’t keen to move to Dubai. When my husband was approached for a job out there I thought that visiting might be good ‘interview’ practice’, i.e. I was up for a trip with him to look round. But when he was offered the job I was a bit shocked. Terribly naïve of me! On top of that, many friends were suggesting it was not an advisable move for a composer. But I bit the bullet and tagged along, telling myself it would only be for a few years, maybe three, max.

But out in Dubai life immediately felt quieter and less internally pressurizing, as if I was away the ‘rat race’. There was a sudden expansion of my world, both geographically and internally. From a distance I felt like an onlooker on classical music scene and realized how profoundly I was grateful for it. I was no longer concerned about how I might fit into it, any preoccupations like that were removed as irrelevant. I just focused on my writing and that was freeing. 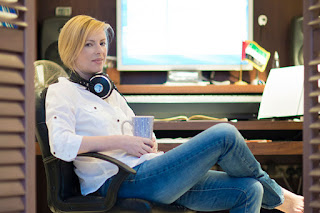 JM: Everything shifted in my head when I learned Arabic. Up to that point I felt that Arab culture was an exotic side-show that friends who came to visit might be interested in seeing. I felt very detached from it. But the language is completely tied up in the culture and by learning it you turn the handle of the door and walk in to people’s lives rather than tapping on the window and waving from the outside. I found a real appetite for learning and threw myself into situations which I would formerly have found a bit disconcerting. I remember one day getting really frustrated by my speed of learning and went off banging on all the doors of our road to find someone willing to let me practice on them. I found Rula (from Jordan) now one of my best friends. Our conversations swing around between Arabic and English, full of the usual neighbourly gossip and life plans.

The majority of older Arab women across the Middle East are beholden to the males in their family, fathers or husbands with expectations that to us look like something out of the 1950s. But interestingly, there is a new generation in the Gulf who have been educated in the West, particularly in America and Britain. They retain their respect for their society’s traditions but have a broader perspective. Young Emirati women in particular have real drive and aspiration, and the city supports them with programmes designed to accelerate their career development. They are demographic that is moving forward with the greatest momentum. I am sure we will see significant social change in the Gulf over the next 10 years because of this.

Arguably the two most influential Middle Eastern artists of all time are women, Umm Kalthoum (Egypt) and Fayrouz (Lebanon). They are loved and respected over the whole of the Arab world. The language of Middle Eastern music interests me increasingly. I haven’t used it in my own music before as it felt like cultural appropriation but I am toying with the idea of borrowing a few idioms for a piece I am writing later this year.

JD: Do you think Dubai will become a more important centre for musical life in the years ahead?

JM: Now that there is a venue, the Dubai Opera, Dubai has a presence in the classical touring scene. That has already changed the perception of the place with a strong message that the programming now caters for an aware and educated public, (for example bringing BBC Proms to the Middle East). There has been classical programming in the UAE before, for example at the Abu Dhabi festival which is only an hour’s drive from Dubai, but Dubai has not generally reflected the programming you might find in a major Western concert hall. An iconic venue sends out a strong message but the fact that 1000 people will attend a concert in Dubai given by the BBC Singers suggests that there is a hunger for quality.

JD: The issue of gender equality in art music has become gigantic these past few years. Do you think we’re seeing a sea-change in the climate at last?

JM: It looks that way and that certainly gladdens my heart.  I have noticed a lot of noise on social media and I have been seeing posts on this from friends in the music business. But I only tend to fly back to England for premieres and spend some time during the summer when schools are on holiday so it’s difficult to get the true temperature on this issue.

My own issues with working as a composer over the last ten years have been specific to the difficulty of being a composer based in a country with no classical music tradition. The fact that I am a woman is incidental and actually hasn’t really made any difference to my work in Dubai.

JD: Any other forthcoming events you'd like to mention?

JM: I have a residency at Sidney Sussex Cambridge and the college choir is recording some of my choral music in March for release in October 2018 on Resonus. The disk will include pieces for Fretwork who are accompanying a few of the choral works.

Enjoy JDCMB? Support it here.
Posted by Jessica at 7:46 am