'Silver Birch' is in the SWAP'ra Gala! 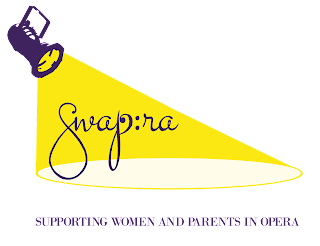 I've done an interview for SWAP'ra, the new charity which aims to change the opera world to make it more user-friendly, all round, for women and parents.

Support for Women And Parents in Opera will be holding an inaugural gala concert at Opera Holland Park on 31 July consisting of extracts from operas famous and less so, in which all the performers and directors are female (though some of the composers, like Mozart and Strauss, were blokes...). Much to our delight, they're also including a scene from Roxanna Panufnik's and my Silver Birch - Anna's aria, in which she tells her son Jack that she will never let him risk his life. Helen Sherman plays our heroine and our original director, Karen Gillingham, will stage it. To my intense frustration, I won't be there. I have no objection to visiting Australia this summer, but I'm sorry to miss Silver Birch's first extract to be performed in London.

The full gala line-up is here. Do go along - there's treat upon treat upon treat, culminating with the Trio from Der Rosenkavalier starring Janis Kelly, Diana Montague and Mary Bevan, conducted by Jessica Cottis. Booking here.


Taster of my interview is below, and there are lots of other hard-hitting, tell-it-like-it-is interviews with the stars of the gala on the SWAP'ra website.


So many of the staple operas and repertoire are stories and music written by men. Why do you think this is, and do you think that a composer’s/librettist’s gender has any bearing on the kind of music she/he writes?

Much of this is historic. Let’s not forget that at present we are celebrating only 100 years of any British women having had the right to vote! Most of the world’s staple diet of opera is older than that; inevitably, women were not often able to be part of the creative teams as their fathers had to have accorded them a suitable musical education and their husbands had to permit their continuation of career (yuck) (but some did, and hooray for them). Plenty of works by women are crying out for rediscovery and they are now starting to be noticed. If more women composers are to be explored and resuscitated, it will also take the involvement of opera’s administrative framework to find, champion and stage them. It’s easier to get audiences into well-known pieces (though Silver Birch was totally sold out ☺ ) and it’s easy for operatic organisations to be…well, maybe a little bit lazy in this regard.

Does a composer/librettist’s gender have any bearing on the music? No. To prove it, try listening blind. I heard some songs recently by a composer named Poldowski and was impressed by their invention, their tremendous energy, their vivid colours and their beauty, and wondered why I’d never heard of him before. Then I looked him up. Turns out he was a she. ‘Poldowski’ was the pseudonym of Irène Wieniawska, later Lady Dean Paul, daughter of Henryk Wieniawski. She’s amazing.

SWAP’ra Supporting Women and Parents in Opera – was established in response to a collective frustration with the unconscious gender bias in the industry. The ultimate aim is to foster an environment in which a female CEO, Music Director, Artistic Director, Conductor, Composer or Librettist is no longer noteworthy.
The founders – Sophie Gilpin, Ella Marchment, Anna Patalong, Madeleine Pierard, and Kitty Whately – will address the gender imbalance in opera by encouraging best practice strategies for diversity and inclusivity, and effect industry-wide positive change by working to dismantle barriers for women and parents in leadership positions and senior artistic roles. Acting in an advisory capacity, SWAP’ra will work alongside a range of organisations to develop projects and schemes to further support or nurture female artistic talent.
Funds raised by this inaugural SWAP’ra gala will enable the organisation to make significant change in the industry. For more information, please visit the website: www.swap-ra.org
Posted by Jessica at 10:11 am