Much fuss has been caused in the choral world these past few days by a suggestion from Lesley Garrett that it's high time all-male choirs were abolished. Some defenders of the great English choral tradition, in which these have featured since forever, have been up in arms. Others lean strongly towards providing equal opportunities for girls to sing, because at the moment they still miss out, and have done for centuries.

I was somewhat amused by a press release that landed in my in-box the other day in which a famous choral conductor vaunted the importance of keeping choirs all-male, saying - without irony - that boys would lose opportunities to make music if they admit girls (um, what does he think has been happening to women all this time?) and that the choir is defined by its people, after which he lists a number of highly distinguished personages going back to the 19th century, who are of course all men. My instinct is to cheer on Lesley Garrett's opinion. At the same time, though, I know it is really not as simple as perhaps we'd like.

What solutions could we present? One is that every institution that has a boys' choir should also start one for girls - indeed, many have already done so. But Anna Lapwood, a choral conductor and director of music at Pembroke College, Cambridge, has another suggestion. Here's a guest post from her on the topic. JD

GIRLS IN CHOIRS: A SOCIAL ISSUE 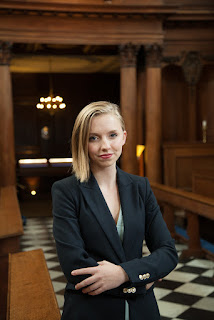 I grew up wishing I could be a chorister. And yet, when I saw today’s article by Ben Dowell in the Radio Times advocating introducing girls into King’s College Choir, I was angry.

I consider myself an advocate for gender equality and for encouraging young woman in choral music. I was the first female Organ Scholar at Magdalen College, Oxford; I was part of an all-male choir; I saw how far we had to go before we could achieve equality.

However, I also eavesdropped on the unique dynamic of an all-male choir. What I saw was mutual respect and support; an environment where the back row understood what it was like to be a chorister, and helped them through it.

Having set up a girls’ choir at Pembroke College, I’ve observed the wonderful dynamic that comes from an all-female choir too: not only the shared singing, but a shared understanding of getting your ears pierced for the first time, or braces, or periods. A girls’ choir like ours, or the choirs at St Catharine’s College, Cambridge and Merton College, Oxford, provide an opportunity for a non-linear educational experience, in which children seven years apart can come together to make music. This is unique, and it’s important.

I have worked with numerous treble lines made up of boys; I have watched them perform as professional musicians to thousands of people without batting an eyelid. I’ve also watched them turn into quivering messes when they’re talking to a girl they fancy. The issue, in my mind, is not one of the sound of the voices; the voices of young boys and girls are both wonderful, and should be celebrated. The issue is one of social implications.

Research has shown that boys sing better in an all-male environment, in which it is totally normal to love singing, and do it every day. I fear that if we were to mix the treble line, the boys would lose confidence.

Choral conductor Suzi Digby did an experiment several years ago, creating two parallel after-school classes. One was mixed with 12 girls and 12 boys, and the other was all boys. At the end of two years, both groups had grown to have over 40 singers, and yet there were only two boys left in the mixed class. It’s not a huge step from boys losing confidence to giving up entirely.

Losing boy choristers completely is something I feel would be a great loss for both the choral world and the wider world of classical music. The education of a chorister is gruelling; in addition to the busy life of a school child, he or she is expected to rehearse every morning and sing Evensong almost every day.

It is this education that produces the lay-clerks of tomorrow, and more recently-formed girls’ choirs are now providing this opportunity for females; daily familiarity with the rhythm and repertoire of choral worship is one of the most important aspects of a chorister’s education.

If, as has been suggested, girls were to sing half the services in a place such as King’s, this education would be diluted for both the boys and the girls. We’ve made huge progress in the past 20 years, creating more and more opportunities for girls in choral music, and yet we’ve still not achieved equality. In my mind, there is only one way to do this: a choir needs to be set up with an all-female treble line, singing with male and female lower parts. This would be a choir where girls would sing six services a week; a choir where girls would receive the full educational scholarship of a chorister. This would be a step towards equality.

I have absolutely no doubt that we need to generate more opportunities for girls in choral music. However, these opportunities should be in addition to the ones available to boys, not a call to abolish all-male choirs altogether.