Last night I was describing the musical work of the painter Norman Perryman to some artistic friends who were young in the 1960s. "That's rock'n'roll!" they declared. It is. And it's also going to rock Symphony Hall Birmingham next Saturday, when Perryman and his projectors join the CBSO and Mirga Gražynitė-Tyla to perform The Sea by the composer and artist Mikolajus Čiurlionis, Lithuania's most celebrated artistic figure, one whose music is hardly ever heard in the UK – though Mirga, herself Lithuanian, is about to change all that. Čiurlionis's combination of musical and visual artistry makes him the perfect outlet for Perryman, who creates "kinetic painting" live in concert.

Video trailer for Saturday from the CBSO:

As I have adored Norman's work for years, yet never before had the chance to see him in action in a top UK concert hall, I thought we should ask him for a guest blog. He has kindly provided one, so here it is. JD

SEEING IS BELIEVING
A guest post by Norman Perryman 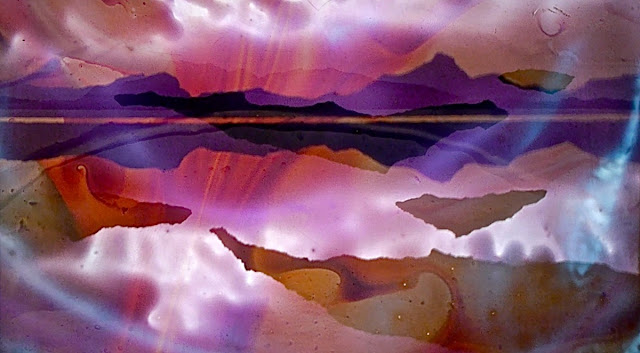 “What? Are you crazy? Have you ever done this before?”

For years, I’ve been trying to verbalize what I do – create a hybrid art-form of flowing colours and light in synch with the music. Unlike a framed static painting, this painting only exists in real time – for as long as the music lasts. Instead of using computer-generated images, I use my hands, as musicians do. My instrument is my paintbrush. I don’t just improvise. I memorize the score, mark it up with my choreography for brushstrokes and colours, then practise for months before the performance.

Rather than synthetic pixelated images, I prefer pure analogue fields of flowing colour that touch our emotions with their organic properties. When these watercolours are magnified with my overhead projectors onto a ten-metre wide screen as I paint, they acquire an other-worldly quality. But words fail me - seeing is believing. 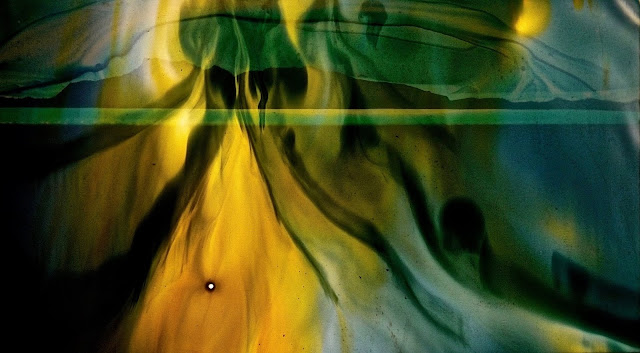 Every day now in my studio, as I practise my lyrical expressionist painting for a performance of the symphonic poem The Sea, by Lithuania's national hero the painter/composer M.K.Čiurlionis (1875-1911), I feel deeply moved. By the end of this 35-minute piece I’m almost in tears, with a sense of having plumbed the depths of his “boundless longing” for a sublime mystical experience with Nature. After months of work, his music is in my blood, in my ears, day and night. I feel we know each other. It’s time now to show this to the world.

Widely regarded as one of the precursors of European modern art, Čiurlionis was steeped in the cultural philosophies of his day, in his case visualized in hundreds of paintings of mystic symbolic landscapes, seascapes and fantastic architecture. It would be totally inappropriate to try to imitate his paintings. Instead, I take my inspiration from his music to show in my own style of painting, how visual and emotional his music is. Had he lived longer, he might have become one of the early film composers, who knew how to underscore the drama of the movies. I myself underline the emotions of the music with my own movies of abstract lyrical images. 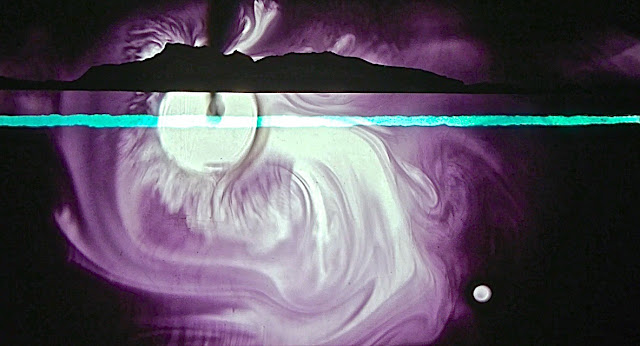 I shall never forget the moment when two years ago the new Lithuanian CBSO Music Director Mirga Gražinytė-Tyla flipped through one of my heavily marked-up scores and exclaimed: ”Aha… you paint the music!” Then, after 20 seconds fast-forwarding through a video-trailer of my Scriabin’s Poem of Ecstasy, she looked at me very thoughtfully and said: “We must work together, with Čiurlionis”. The obvious choice for my fluid watercolours was The Sea.  I spent the following summer travelling in Lithuania, to soak myself in its rich culture and nature. I felt I was in the very heart of Europe. That visit and following studies played an essential part in my understanding of The Sea and of the amazing man who wrote it.

How did it all start? As a Birmingham art-college student in the early 1950s, I couldn’t afford lunch, so my lunch-times were spent at free concerts given by the City of Birmingham Symphony Orchestra just across the road in the Town Hall. I was wrestling with the choice of studying music or art. My compromise was to dedicate my life to finding a way of satisfying two passions, by bringing these art-forms together. Forty years later, it was the visionary Simon Rattle who recognized my ambition. He suggested working together with his CBSO and in 1993 BBC Television filmed the results in the documentary entitled Concerto for Paintbrush and Orchestra. Since then, after 25 years of performances worldwide, it feels like coming home to be back in Symphony Hall, this time via a pathway that led to Lithuania, of all places. 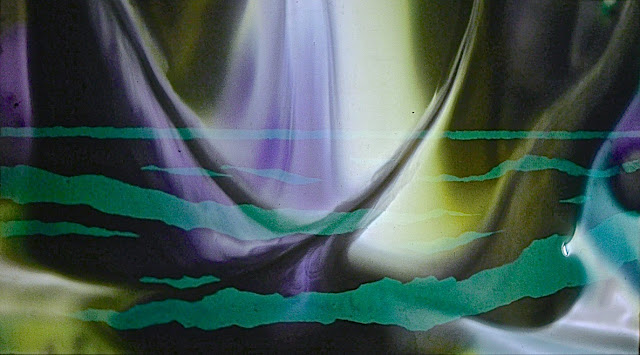 But I was also appalled with the realization of how tragic and complex the history of Lithuania is, despite having been the largest and one of the most prosperous countries in Europe. Many of us are ignorant of the significance of this tiny country and of the many cultural heroes it has produced. Did you know that Jascha Heifetz, Philip Glass, Bob Dylan, Sean Penn, Leonard Cohen and our celebrated author Jessica Duchen, to name just a few, all have Lithuanian roots? [another story, that - JD]

It’s been a long road, so this performance with Mirga and her CBSO in Birmingham Symphony Hall on 16  February, Lithuania’s Independence Day, is a huge milestone for me. I’m proud to play a modest part in the ongoing cultural renaissance of the city where I was born.

Norman Perryman is with the CBSO and Mirga Gražynitė-Tyla at Symphony Hall, Birmingham, on Saturday 16 February, 7pm. More info and booking here.