WELCOME TO THE SILVER CHOCOLATE AWARDS 2019!

Come on in, quick.

It's raining. Again. Still. Just dump your stuff in the cloakroom and hurry along that corridor to the...yes, it's our CyberPoshPlace! It's decked out with seasonal sumptuousness and ready to host our magical mystery Silver Chocolate Awards all over again, as we do every winter solstice.

The glitter-balls are atwirl, the walls are draped with purple silk and on their thrones, side by side, Ricki and Cosi, joint feline monarchs of our particular glen, are preparing to give this year's winners a prize purr and let them stroke their fine silvery and milk-chocolate-coloured fur.

Meanwhile, our cyber bubbly will make you only as tipsy as you wish to be, our virtual canapés magically transform to be gluten free, dairy free or vegan as you desire, upon contact, and every composer and musician you have ever wished to meet is here, transformed into founts of sociability. 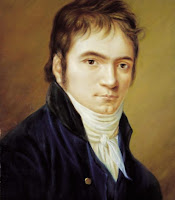 Our special guest star and Icon of the Year is, of course, Ludwig van Beethoven - or Luigi, as he becomes in Immortal, which is starting on its path towards publication. The old boy looks quite pleased. He's wearing a blue coat and yellow waistcoat; his brilliant dark eyes are surveying the crowd to make sure Prince Lichnowsky hasn't shown up; and the sisters Therese (our narrator) and Josephine Brunsvik are on either arm, in adoring attendance.

Luigi, you have a big year ahead. Exploring your life in greater depth and attempting to pay tribute to you has been one of the most thrilling experiences I've ever had. It has turned into a journey from Jane Austen to (sort of) Tristan und Isolde and I hope it will bring your story to life in a whole new way. There are some wonderful books about you out there. There's also a lot of pretty awful stuff. I hope to contribute to the former, rather than the latter, but I guess time will tell. It's full steam ahead now. Please come up to Ricki and Cosi and enjoy a really good purr.
Next, I'd like to welcome two composer colleagues of today who have been the centre of my work this past year. Actually, three, but I'm not allowed to reveal who the third is yet or what we're doing, so he will have to be incognito. Roxanna Panufnik, thank you for changing my life and entrusting me with the task of providing words that will spark some of your wonderful music into existence. I can't wait for our big Beethoven-anniversary piece at the Berlin Philharmonie that's coming up on 1 May, Ever Us. We bring Beethoven's words, world and favourite poets into a work for 10 CHOIRS from all over the world, plus the instrumentation of Beethoven's Symphony No. 9, and our doughty directorial colleague Karen Gillingham is in charge of crowd control. Huge thanks to the Rundfunkchor Berlin for this glorious commission. Please join us, folks!!


Paul Fincham, The Happy Princess was a treat of a whole different kind: it was a story I've wanted to adapt for opera for years, your music is chock-full of earworms, and the staging, again by Karen, was utterly perfect. The thing was a smash-hit even if it only had one performance. Let's hope there will be more opportunities for it beyond this, because it deserves to be heard! Thank you for your work, your confidence and your friendship. And thank you, Garsington Opera, for the faith that you put in all of us! And, dear mystery colleague - can't wait to see what you're coming up with....
Conductor of the Year is the one and only Vladimir Jurowski, who needs no introduction. Three of his concerts with the LPO this autumn - respectively the Tchaikovsky Pathétique Symphony, the Strauss Alpine Symphony and Mahler 2 - were some of the best I have ever attended in my whole life, and I go to quite a lot. Mahler 2 left everyone simply speechless backstage afterwards. Vladimir has another year and a half or so to go as principal conductor of the LPO and he will be very, very sorely missed - though we're promised he'll be back often. I hope the Bavarian State Opera knows how lucky it is to be welcoming him in as music director.

I'd like to give a gigantic thank-you to Marios Papadopoulos, whose support for Ghost Variations in the form of the Schumann Violin Concerto last June and for Immortal in his Oxford Philharmonic's wide-ranging Beethoven celebrations next year really means the world. I'm looking forward to being part of the Oxford Phil's Beethoven festival in November and working at the Holywell Music Rooms with baritone Benjamin Appl, pianist Manon Fischer-Dieskau and a string quartet drawn from the orchestra's superb musicians. (And Happy Birthday, maestro!)

Speaking of the Bavarian State Opera, this is Opera Company of the Year for Die tote Stadt, which was unforgettably splendid - I doubt I will ever hear this, "my" special opera, better performed. The cast headed by Jonas Kaufmann and Marlis Petersen was perfect and Kirill Petrenko's conducting brought out all the marvels of the Korngold score with its chilli-pepper intensity and bristling detail. A little too much use of the "revolve", perhaps, but never mind. A massive thank you to the fabulous British mezzo-soprano Jennifer Johnston, who sang Brigitta, for hoiking me over to Munich at short notice and making sure I got to hear it! They are all my singers of the year, too.

Pianist of the Year was tricky, because there are so many wonderful performers whom I love to pieces. However, the prize goes to Norma Fisher, the piano pedagogue who had to retire from the stage decades ago, but whose live performances from way back have been resuscitated by the record producer Tomoyuki Sawado and released on Sonnetto Classics to stunning effect. I recently went to visit her for one of the Masterclass series of articles for International Piano magazine - out sometime in the new year. How I wish I could have my time as a piano student again and beat a path to her door (this in no way diminishes my affection and gratitude to the marvellous teachers I DID go to, of course!).

Honourable mention, too, to some remarkable young pianists: Isata Kanneh-Mason, Mishka Rushie Momen and Iyad Sughayer, who all have had mightily impressive debut CDs released this year - Isata's devoted to Clara Schumann, Iyad's to the eye-wateringly challenging piano works of Khatchaturian and Mishka's an intriguing programme based around variations, including a special commission from Nico Muhly. And last, but very crucially, a ginormous thank you to my beloved concert partner Viv McLean - we have a super new Beethoven show coming up next year, so please watch this space.

Speaking of performance partners, a massive, massive cheer to my fabulous team of harpsichordist Steven Devine, cellist Jonathan Manson and baritone Ben Bevan for their glorious collaboration on Being Mrs Bach's UK premiere at Kings Place back in April. Please come up and have your purrs right away. And here's to more outings soon.

Violinist of the Year is of course Tasmin Little. I'm devastated that she has decided to step down from performing next summer, but pastures new are beckoning - not least, she is to be joint president (with Barenboim) of the Yehudi Menuhin School and I know she will still be very active in the music world as professor, advocate, spokesperson and pretty much anything else she wishes to turn her hand to. Brava, Tasmin! Meanwhile, I've adored working with include two humongously wonderful violinists this year: Alena Baeva and Fenella Humphreys, both of whom can set the flames flying with their all-out, dedicated artistry.

Festival of the Year is the marvellous Tuscan joy that is Incontri in Terra di Siena, run at La Foce, the home of Antonio Lysy's family and headed by artistic director Alessio Bax. Having not been to Tuscany for about 30 years, I came back from my trip there ready to pack everything in and run away to Italy for six months at the very least. A magnet for marvellous music-making in varied, atmospheric locations, and the food is out of this world. Even the gluten-free spaghetti. I also had a great time Korngolding at Bard Summerscape, in upstate New York, which was quite an experience.

A book I'd like to applaud: Richard Bratby's Forward, the history of the CBSO - gorgeously produced, seamlessly readable, superbly expressed and full of splendiferous anecdotes. A wonderful anniversary tribute to the orchestra, with the lightly-worn engaging touch of the insider who knows exactly how it really works...

My Record of the Year is John Wilson's recording of the Korngold Symphony in F sharp. If you've ever wondered what all the fuss is about Korngold, this performance with the Sinfonia of London will show you. It's white hot, swashbucklingly virtuoso, staggeringly precise, with an intensity that sweeps all before it. It's the recording I've been waiting for for 30 years - doing for the Symphony what Die tote Stadt in Munich did for that opera. Showing what it's really made of and everything it can truly do. Is this the year that Korngold finally came home? Catch, too, the DVD of the Deutsche Oper Berlin's Das Wunder der Heliane directed by Christof Loy and conducted by Marc Albrecht, for a golden hat-trick of excellence.

We usually have one stuffed turkey, too, and there've been a few, as I seem to have gone to several of the Wrong Things this year. I'm sorry to say it has to be ENO's Orpheus in the Underworld, which was...unfortunate. Then again, I haven't yet seen Cats... [ouch! Ricki, get your claws out of my leg!]

And now let's have a big round of applause, please, for every musician who has touched the hearts of his/her audience during the roller-coaster year that has just been and gone. Thank you for the music. We love you all!

While the winners approach the silken cushions for their prize purrs, let's have some more cyberbubbly and hope that the year ahead will bring, with its new decade, new hope, new ideas, new approaches, new positivity and new focus on everything we can do to bring openness, internationalism, humanity, great-heartedness and great art of every kind into our everyday world. Bring it on. Time to dance.