Down under, but not out: the Australian Festival of Chamber Music is coming soon to a computer near you 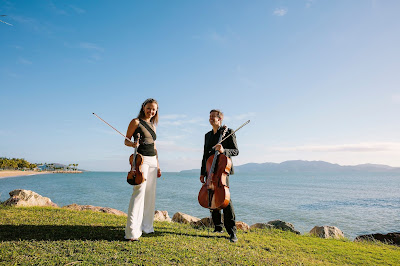 The Australian Festival of Chamber Music gets into gear...
Photo: Andrew Rankin

The pandemic is reaching the point at which we almost don’t dare to plan ahead at all, for fear of hopes being dashed yet again. If you are the director of an international festival, though, you can’t really afford to think like that. You have to hope and plan for the best, while also being prepared for the worst, doing all you can to anticipate likely troubles and short-circuit them before they happen. The Australian Festival of Chamber Music is a case in point.

I’d hoped to go last year, but of course that proved impossible, and the initial rescheduling for this year bit the dust when the organisation reluctantly but necessarily took the step of revising the schedule to use only those artists already in Australia, rather than importing the large contingent of “internationals” as originally planned. This weekend – starting tomorrow, Friday - they’re holding a three-day online festival to showcase a few of those internationals and bring their devoted audience some delicious musical offerings, even if not quite on Orpheus Island yet.

The festival’s artistic director for the past few years has been the British pianist Kathryn Stott, and the Covid-19 reshuffles have chiefly landed in her inbox. She was to be handing over to the incoming new director, violinist Jack Liebeck this year, but when her last festival had to be postponed, Jack gallantly offered to defer taking up his appointment too, allowing her to go out in style.

“It was really generous-spirited of him,” Kathy says, “and I’m very grateful.” Whether she can be there herself, though, is still in question: the borders of Australian states have been closed very quickly at various times during the pandemic and with international travel all but impossible, Kathy has had essentially to write herself out of the programming to be on the safe side.


Keeping the musical schedule as planned as far as humanly possible, she has reassigned the pieces she would have played to other pianists, drafted in the presenter Russell Torrance from ABC to conduct the morning musical chats with festival artists that are a regular and extremely popular part of the proceedings, and as hosts for the evening concerts, Australia’s operatic “golden couple”, Cheryl Barker and Peter Coleman-Wright, will be on location (I’m delighted that Cheryl will also take over my script for the Immortal Beloved concert, though am of course sick as the proverbial parrot about not being there in person). An unexpected bonus that’s arisen from the state of international travel is that Piers Lane, who was artistic director for 16 years before Kathy, is spending most of this year in Australia and will be returning to AFCM for the first time since standing down from the post.

“As far as I’m concerned,” Kathy declares, “it is still Beethoven’s anniversary year, it is still the Goldner String Quartet’s 25th anniversary and although I’ve had to pull out the odd piece here and there, the festival is still its whopping, ginormous self!”

It was certainly whopping and ginormous when I went in 2018. Glittering seas, palm trees, Australian wine under the stars, the best seafood ever and a wonderfully convivial atmosphere among the large team of performers, to say nothing of the audience and the devoted festival Friends who come to absolutely everything – it was the festival of a lifetime. “That was a wonderful year for building new friendships and musical relationships,” Kathy says, pointing to several new associations among her colleagues with invitations to Norway, new commissions for some of the composers from various performers and plenty more to look forward to when “all this” is finally over.

The online Festival Overture from 16 to 18 April brings music from morning til night, as is always the case at the main AFCM, and features three special recitals from musicians based in London, where they are being streamed from the Voces8 Centre: Jack Liebeck and Katya Apekisheva, Carolyn Sampson & Joseph Middleton, and husband and wife duo Alexander Sitkovetsky and Wu Qian. These events can be accessed via the Melbourne Digital Concert Hall’s site, which is partnering with AFCM for the occasion (you’ll need to buy tickets). Morning and lunchtime concerts feature artists who will be appearing at the festival in August, plus a special performance by Kathy herself. Meanwhile you can feast on South Pacific travels from the comfort of your own home through the Destination Dreams videos of the landscapes around Townsville, Far North Queensland and the surrounding islands. Find the full schedule here.

I’ll be writing more about AFCM in the run-up to the 2021 festival, so do stay tuned, and keep your fingers firmly crossed that everything can go ahead as intended when we finally reach August.

Booking for AFCM2021 is now OPEN and you can find this, along with full details of the programme, here: https://www.afcm.com.au
Posted by Jessica at 11:37 am