Tonight: discussion on Equality and Conductors at the Institut Français

Slightly short notice, I know, but here's what's happening tonight. Do come along if you can. I'm chairing and we have some really amazing speakers! It's part of the Institut Français's Women Shaping the World series and takes places at the Institut's premises in South Kensington.

To celebrate International Women’s Day and echoing French conductor Laurence Equilbey’s concert at the Barbican [tomorrow], the Institut français is hosting a panel of women conductors to debate on gender equality issues in the domain of classical and contemporary music. To this day, the gap between female and male conductors is mind-blowing and should be addressed.
Women conductors Claire Gibault (France), Eimear Noone (Ireland) and Alice Farnham (UK) will bring their own perspective on equality on the podium and the role of women conductors in programming women composers and musicians. Lydia Connolly, joint managing director of Harrison Parrott, a leading advocate for more women on the podium, will also join the debate.
£10, members & conc. £8
The talk will be followed by a wine and cheese.
See also on 8 March at the Barbican, Insula Orchestra: Beethoven and Farrenc, conducted by Laurence Equilbey and including Symphonie n°3 by French composer Louise Farrenc as well as Beethoven’s Triple Concerto performed by the violinist Alexandra Conunova, the cellist Natalie Clein and the pianist Elisabeth Brauss.

Making fireworks at the Linbury

Alice Farnham takes the podium for The Firework-Maker's Daughter at the ROH Linbury from Thursday through to new year. I had a chat with her about talent, courage and luck - as well as how to change the conducting profession for the better. My piece should be in The Independent's Radar section today. Director's cut below.

There’s a satisfying sense of poetic justice in seeing the conductor Alice Farnham take the podium for David Bruce’s opera The Firework-Maker’s Daughter, the Royal Opera House Linbury Studio’s family show for Christmas. It’s based on Philip Pullman’s novel for children in which Lila, aspiring to be a great firework maker like her father, must prove herself and is found to have the three essential gifts: talent, courage and luck. Farnham herself has a good dose of them all. She is blazing a trail in a profession still – notoriously – too much a male preserve. And in her efforts to change that situation, she can certainly make sparks fly.

Educated at a school for clergy orphans near Watford, and then at Oxford, Farnham says that her passion for conducting goes back to “a lightbulb moment” at university: “I started conducting because as organ scholar I had to direct the college choir,” she says. “At first I was under-confident, but I suddenly began to find that actually communicating with other people was more interesting than sitting in a cold organ loft. Then I conducted the university choral society in the Fauré Requiem – and it was the first concert I’d ever done without feeling nervous.”

She later studied with Ilya Musin in St Petersburg; the great Russian “guru” of conductors taught plenty of women. “He was criticised for doing so – but he took no notice,” she remarks. Back in Britain she began to build her career in a variety of ways, not least through work as an opera prompter, often at the Royal Opera House. Prompters used to – and sometimes still do – lurk under the front of the stage to cue the singers in with the right words at the right moment. “It’s one of the best trainings for an opera conductor,” Farnham says.

In 2013, watching Marin Alsop become the first woman to conduct the Last Night of the Proms, Farnham took on board the American “maestra”’s point that it was ridiculous, in the 21st century, that such “firsts” still needed to happen. The dearth of role models was clearly a problem; so, too, the sheer weight of numbers that appear stacked against women attempting to enter the profession. Farnham therefore conceived the idea of a course through which young female musicians of school and college age could try their hand at conducting for the first time.

Morley College's director of music, Andrea Brown, herself a conductor, took up the idea. Since then it has snowballed: “We’ve held short courses up and down the country, some of them focusing on specifics such as contemporary music or opera,” says Farnham. By now around 60 young women have taken part: “Some have said to me afterwards that as a result they’ve become seriously interested in taking up conducting,” she declares.

It is possible, she suggests, that a greater number of women taking up the job will help to change what it means to be a conductor at all. “Why are these people so revered anyway? What do they do to deserve it?” she muses. She would like to see the profession become less despotic, as it has often been in the past, and “more about collaboration, nurturing and communication”. And maybe that’s all about new ways of making fireworks.

Morley College has announced the next in its series of workshops for young women music students to try their hands at conducting, led by the conductor Alice Farnham:

In March 2014 Morley College ran its first Women Conductors weekend workshop. This was developed in response to wide spread media coverage at the time that commented on the lack of female conductors in the industry. It is designed to create more opportunities for young women to try out orchestral conducting, and is led by acclaimed conductor Alice Farnham.
With generous funding and support from Arts Council England the weekend workshops will run during 2015-16. They will be led by Alice Farnham with stagecraft and body language coaches Alma Sheehan and Shirley Keane. In addition students will be given practical experience of conducting small professional ensembles. View the weekend workshop programme and learn more about the tutors.
Upcoming workshop dates:
9-10 May 2015, Oxford University
30-31 May 2015, Leeds College of Music
Further workshops will be held throughout the UK during 2015/16.
The workshops are open for application from women aged 16-25 or in full-time music education either in conservatoires, university or in sixth form and planning to study music full time. Whilst students who already have conducting experience will find this rewarding and challenging, it is also open to students who may think conducting is not for them, but are willing to try it out.
Outstanding workshop participants will be selected to take part in the final masterclass day with a leading female conductor and a full orchestra, as part of the Women Conductors at Morley event in 2016.
Fees:
Participant fee = £150
Observer fee = £40
How to apply:
Send a one page CV alongside a 500 word statement on why you would like to take part in the workshop to womenconductors@morleycollege.ac.uk

Spiralling around Formigine...plus that issue about women conductors again...

At last Ricki and Cosi decided to sit for their official portrait by Lord Thingy. 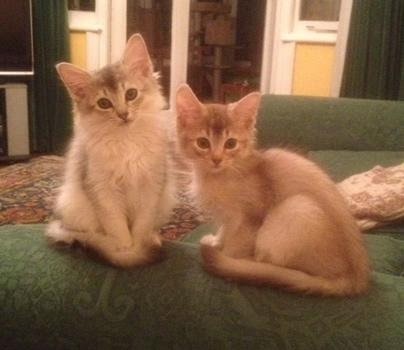 Cosi on the left, Ricki on the right. As you can imagine, it's not easy to get much work done with these little characters around. They're busy exploring...

Luckily it was last week, not this week, that I went off to Formigine in the Emilia Romagna region of Italy to visit the extraordinary chamber orchestra Spira Mirabilis on its home turf. I listened to them rehearsing for four hours (most UK orchestras wouldn't fancy one minute over three - and this was four hours in the afternoon, following a similar quantity that morning). With that span of intense hard work punctuated only by a brief break for Italian coffee, they covered all of about nine minutes - if that - of Colin Matthews.

Here's my piece about them from yesterday's Independent.

And here is a bonus bit. This is what Lorenza Borrani, leader of both Spira and the Chamber Orchestra of Europe, said when I asked her if she'd ever thought about becoming a conductor - because I reckon she has the drive, the personality and the expertise to carry it off, should she so wish.

"It sounds a bit superficial, but the figure of a woman conducting doesn’t drive me. Maybe because I haven’t been amazed by one: I have pictures of great conductors, men, I have never seen one inspirational woman. I'm trying to speak very honestly: you have concerts by Claudio [Abbado], Harnoncourt...but nothing so strong happened to me in my life to make me say 'wow, that’s really so'. When you are young you have inspiration and you think 'Wow, I would like to be like that', and this it didn’t happen. Not that you have to have examples from the same sex as you, but to have the wish, if I want to have inspiration... I felt sometimes, since I direct COE, that they need to know the job because it would make my life easier; I wouldn’t like to stand in front of the orchestra, not being part of the group. And actually conducting studies in school is something every musician should do, and I'm happy that here [at Spira] we do it."

So you see the importance of role models. This is why we need to encourage more women to become conductors, and give opportunities to the ones there are to shine, because otherwise the lack of role models becomes a self-perpetuating situation. As for dumping the maestro altogether, Spira can pull it off - but it takes a great deal of doing.

If you know a young conservatoire musician aged 16-19 who feels she would like the chance simply to give it a go, I can heartily recommend the course at Morley College started last year by Andrea Brown and Alice Farnham. More about it here.
Posted by Jessica at 10:14 am