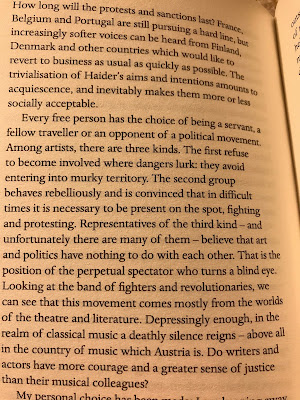 A rather wonderful interview with Sir András Schiff has just arrived in a press mailing from the Salzburg Festival and I thought you might enjoy it as much as I have. Here he is in the Mozart D minor Concerto, to start us off...

Helga Rabl-Stadler: I had the pleasure of hearing you once again during the 2016 Mozart Week. It was wonderful. I have a question regarding the details of that concert: wherein lies the challenge and the attraction in playing two concerts on three different pianos within 24 hours – programmes featuring Mendelssohn and Mozart on grand pianos by Graf and Walter and on a modern Bösendorfer? As you did on a CD in 2013, when you played Beethoven’s Diabelli Variations on a 1921 Bechstein grand and then on a pianoforte built by Franz Brodmann in Vienna around 1820.

The Goldberg Variations: changing the world for 70 minutes


If we didn't have the BBC, guys, we wouldn't have this: András Schiff playing the Bach Goldberg Variations at the Proms, fabulously filmed, televised yesterday and available to watch on the iPlayer
for 29 more days, here. I was away in Switzerland on the day itself, 22 August, and am glad to be able to experience it after the event.

It's playing in which not just mastery but wisdom, balance and humanity shines out of every note of this intimate music, in which the Royal Albert Hall is somehow transformed into András's living room - and in which a state of grace seems to surround the pianist and, with him, us, the listeners. In the introductory interview with Kirsty Wark, András explains that it doesn't matter whether or not you are an atheist or religious, or in what way; Bach was, and you have to enter that zone if you're going to play his music. In he goes. And during those 70 minutes of the Bach's duration, the world changes.

Do yourself a favour. Hear it today.

UPDATE: The filmed version of this performance is unfortunately not available outside the UK, but readers overseas should hopefully be able to access the audio-only recording on the iPlayer, here: http://www.bbc.co.uk/programmes/b066zjyt
Posted by Jessica at 10:02 am