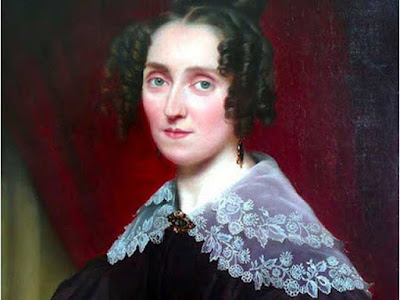 I reviewed the Aurora Orchestra's splendiferous performance of Louise Farrenc's Symphony No. 3 the other day at Kings Place. WTH is this piece not performed 30 times a year? It's simply wonderful - and the orchestra under Duncan Ward gave it a beautifully characterised performance. Plus a gorgeous new piece for cello and strings by Charlotte Bray and Angela Hewitt in a fine, glittering Mozart concerto, on a piano that took up most of the platform... Here's my review for The Arts Desk.

Why does music suddenly disappear? It is all the more heartening when a work as excellent and enjoyable as Louise Farrenc’s Symphony No. 3 takes wing once more, but you do have to wonder what they were thinking in mid 19th-century Paris to allow such a terrific orchestral piece to sink and vanish. The symphony formed the second half of the Aurora Orchestra’s latest concert in its Pioneers series for Kings Place's "Venus Unwrapped" series, and very welcome it was.

Farrenc (1804-1875) was a highly successful and well-regarded musician in her day, known as a brilliant pianist and the only female professor at the Paris Conservatoire. Her third symphony, premiered in 1849, bristles with post-Beethovenian energy; the idiom is a little like Weber, but with a voice all its own, deftly written with never a note too many, plus a satisfying feel for structure and strong conclusions. The slow movement contains some enchanting ambiguity between major and minor, the scherzo fizzes and pounds and the finale is bright with contrapuntal virtuosity.

Read the rest here. https://theartsdesk.com/classical-music/hewitt-clein-aurora-orchestra-ward-kings-place-review-–-rise-and-shine
Posted by Jessica at 8:52 am Links to this post

Are symphonies from memory bad news for pianists?

If you want music to lift you clean out of your chair, go and hear the Aurora Orchestra play a symphony from memory.

The opening concert of their season, on Sunday afternoon, entitled Smoke and Mirrors, found them at the Queen Elizabeth Hall, delivering a theatrically staged event – in the first half of which, through clouds of dry ice, the brilliant singer Marcus Farnsworth travelled from Schubert's Der Wanderer to HK Gruber's Frankenstein!!. A narrated link described an erupting volcano, the skies that it darkened in 1816 and some glimpses of Mary Shelley and friends writing ghost stories by the lake. This storytelling's ability to immerse us in the world and the legacy of early romanticism proved vivid and atmospheric; Aurora has Kate Wakeling as writer in residence, and I assume she penned this dramatic casing. (You can find her work in their season programme - not marketing blurb but actual short stories, literary and most attractive.)

All this was tremendous fun. No musician escaped this little production of Frankenstein!! without having to don a silly hat or find a hobby horse ogling at her, and conductor Nicholas Collon had to turn into Superman, with cloak and red lycra underpants. Frankenstein!!, if you haven't heard it, is a bit like Kurt Weill mixed with Monty Python on speed. It's totally wonderful and completely bonkers.

But after the interval came Aurora's famous speciality, a symphony performed from memory, and it was Beethoven's Fifth. Whatever this concert's conceptual presentation, this was the absolute real deal.

Do you think you know this piece? You might find yourself reassessing that notion at such a performance. Even the arrangement of the orchestral forces is theatrical - the contrabassoon entering after the slow movement to sit with the double basses, and the piccolo standing prominently beside the timpani, her interjections in the finale all the more noticeable as a result. The finale is all Handel and Haydn to begin - this was a composer who surely knew his Zadok the Priest and his Creation's Sunrise episode - with a hefty dose of Mozart's Papageno in the coda, which is one big Haydneque joke (the never-ending movement idea later taken up by Dudley Moore, of course). The slow movement - to which Collon brought a lot of con moto, increasing the challenges for the already virtuosic string players - is a close sibling of the variations in the Appassionata, Op. 109 and Op. 111 piano sonatas, the note-values dividing more and more.

Should one have noticed all this before? Assuredly yes (if you're a critic, at least). The thing is, when one aspect of what you're hearing makes you hear something in a new way, the brain starts connecting in new ways too, and you start questioning and listening differently and noticing all manner of things that you might simply have taken for granted.

No chance of taking anything for granted with this lot. The whole thing flew. At the end the packed audience - young, on average, and maybe not just because this was 4pm on a Sunday afternoon - got up and yelled. Aurora hasn't only pushed the envelope. It's an orchestral rock star.

My question is: if these were the self-same musicians, knowing the music every bit as well, but sitting down and using the music, would it sound the same? Unless we make them do that, one  can't say, of course. I've long been a little bit skeptical about all this, mainly because I was a pianist myself and pianists have been cursed with the necessity of memorisation since the beginning of piano-time, or at least since Clara Schumann and Liszt. No wonder people tend to think we are nutty and antisocial - we are always busy, stressing out something chronic in the practice rooms, trying to learn things from memory! In recent years, more and more pianists have started to think life is just too short and have been playing from a score, often on an iPad, and I've been fully in favour of this. Because they're right: life IS too short...

If you've ever played in an orchestra, can you imagine learning a whole symphony from memory, standing up (unless you're a cello, bass or that contrabassoon), interacting with your fellow musicians, having to concentrate even more than you would be at the best of times, having to know not only what you are playing but what everyone else is playing too and how it all fits together, and being able to see everyone else because you're not having to stare at the music? I can only imagine what a certain orchestra I know well would say if asked to do all this, and I reckon it wouldn't be a pretty form of words. But these results are transformative. There's an equality between sections, a sense of everyone interacting the way they would in chamber music. It's not only a question of breathing as one entity, becoming one big animal with lots of paws, as a great symphony orchestra with top conductor can. It's a level of concentration and communication that pulls in the audience to be part of it too.

So what are the implications for pianists? If you're playing solo, then there's only one of you and you don't have to choose between staring at the music or indulging in actual interaction with your colleagues and the conductor. If you're playing Bach fugues or Messiaen or Ligeti and suchlike, I wouldn't blame you one little bit for plumping for the old iPad. It won't serve as a barrier between you and anyone else and it will ease your mind and your nerves, which can only be a good thing.

But the big irony is that for pianists, the convention is to memorise solo works and play chamber music from the score (indeed, the pianist is usually the only one who has the full score in front of him/her). While the set-up of the chamber music circuit would probably make this idea deeply impractical, I can't help thinking it should be the other way around. It's in chamber music that memorisation would be most useful to all concerned, facilitating that interaction. That's not to say it doesn't work as things are. It's just that in an ideal world.....

Well, we don't have an ideal world, in any way, shape or form. But Aurora shows that with enough vision, ambition and determination, transformative experiences are still possible. Bravi tutti.

Posted by Jessica at 10:14 am Links to this post