We were 4 judges, from different corners of the music world: Jasmine Dotiwala, Catherine Mark, Kate Nash and me. We had 40 places across the board, to encompass all genres. Under the circumstances, it felt good to get so many representatives from the classical world in, often at a high placement. We can't please everyone, of course, and some people are now busy being indignant - though this is possibly because they think we should have been doing something we hadn't set out to do in the first place.

This list wasn't about fresh-faced charm, talented young performers and composers, or even the latest entrepreneurship. This was a POWER LIST. It's something BBC Radio 4 Woman's Hour does every year, exploring a different industry each time. The fact that this year they elected to turn the spotlight on the music world is telling: these are indeed crucial, seismic times for women in music.

So the criteria were power and influence: celebrating the women who in the past year have been driving necessary change in the music business - whether that means Beyoncé (no.1) as feminist and activist as well as top-selling artist, Vanessa Reed of the PRS (no.3) persuading 120+ festivals worldwide to sign up to 50-50 gender parity in performing line-ups and new commissions, from 2022, Chi-chi Nwanoku (no.9) single-handedly creating and propelling to fame the UK's first majority-BAME orchestra, Chineke! with its transformative effects, or, further down the list, the tireless efforts of Deborah Annetts campaigning for the rights of musicians via the ISM, or the way Edwina Wolstonecraft has programmed International Women's Day celebrations on Radio 3 - a station on which one used to go for weeks or months without hearing a note written by a woman - raising many consciousnesses by so doing.

Gillian Moore, director of music at the Southbank Centre (no.6), leads from the front, championing women in music in every way and blazing a trail in new music programming; Kathryn McDowell at the LSO is a long-term thinker and has effected Simon Rattle's appointment, which in turn may - if all goes according to plan - help to spur the creation of a new hall with top-notch education facilities. Anna Meredith is an astonishing, genre-bending composer, with an approach that sets an example to a whole new generation. Violinist Nicky Benedetti is a tremendous campaigner for music education at a time when it's never been more necessary - she could, after all, have concentrated solely on her own stellar career, but she doesn't. Marin Alsop is a household name, more so than any other conductor who is female: you need to see it to be it, and there she is on the podium, for all to see. Alice Farnham has created a course to encourage more and more women to take up conducting, something that will soon bear transformative fruit.

So basically I think we got it right, even if we'd all have liked the list to be three times as long. A lot of wonderful names ended up on the cutting-room floor, because there wasn't the space. I won't tell you who they all were, but I will just say that the one I was most sorry to lose is arguably the world's greatest living pianist and has been a role-model for younger musicians for at least 40 years. And, um, we left out Madonna.

Posted by Jessica at 3:04 pm Links to this post 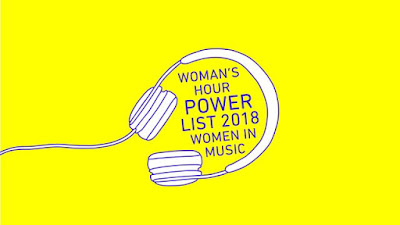 It's tomorrow, Friday 28 September live on BBC Radio 4 Woman's Hour. We're live at Maida Vale Studios at 10am. Please join us! Jenni Murray presents, Jasmine Dotiwala and I will be representing our panel of judges, and a lot of our Top 40 will be with us to celebrate. The Powerlist covers women who are changemakers, leaders and role models in all manner of musical fields, so no doubt there'll be plenty of controversy about who's on it, and who isn't.

Was it difficult? Was. It. Difficult.

Do tune in if you can. https://www.bbc.co.uk/programmes/b0bkpjrk


Posted by Jessica at 9:56 pm Links to this post

Live radio is quite scary, but I took the plunge yesterday. It's an honour to be on the panel of judges for the BBC Radio 4 Woman's Hour Power List 2018, which is devoted to Women in Music and was launched yesterday. I'm the classical representative alongside some formidable figures from the pop world - producer Catherine Marks, broadcaster Jasmine Dotiwala and singer-songwriter Kate Nash - and we have quite a task ahead of us, whittling down the number of powerful women in the music world to select the top 40. The list will be announced in the autumn.

You can hear the podcast from yesterday's programme on the iPlayer, here. Happy listening.

Posted by Jessica at 9:34 am Links to this post

How Marin is changing the world

A few weeks ago I went to listen to Marin Alsop giving masterclasses for young women conductors and had a terrific interview with her. She is not one to pull her punches on "the women conductors thing". The piece is in the Independent today, ahead of her concerts with the OAE in Basingstoke on Thursday and the Royal Festival Hall on Saturday - the one with the Schumann Violin Concerto.

I'm delighted to say that she and I will be on BBC Radio 4 'Woman's Hour' tomorrow to talk about the story of the Schumann Violin Concerto. Plus I'm now joining the panel for the pre-concert talk at the RFH on Saturday (5.45pm) where we'll be discussing music, mental illness, Schumann, the Concerto and more.

Here's a taster of the article and you can read the rest here.

Some conductors who are female are outraged if one raises “the women conductors thing”. Why are we still talking about this? Isn't it time to forget it and just get on with making music? Alsop, though, faces the issue head on – and she is perfectly happy to bring it out into the open.

“People ask why a course like this is necessary, and I think it's a disingenuous question,” she says. “It's only necessary because of the reality. It's not something I'm making up. I'm just reacting to the landscape.” There is no point, she suggests, trying to deny that there are too few women conductors, or that they face problems different from those experienced by their male colleagues – both in terms of that glass ceiling protecting prestigious posts and in how the details of their artistry are perceived.

“Because I have quite a thick skin, I don't mind being the one out front, trying to elbow my way in,” she adds. “But I think, as that person out front, it's important for me to create a pathway for people coming through. I don't want it to be so hard for the next generations.”

Posted by Jessica at 7:47 am Links to this post