ODETTE: A CELEBRATION OF SWAN LAKE
A narrated concert 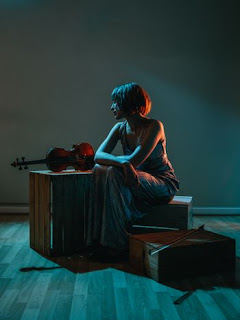 Pyotr Ilyich Tchaikovsky’s ballet score for Swan Lakecasts a powerful spell over generation after generation. It has had innumerable reimaginings and retellings, balletic and otherwise. The latest is author and music critic Jessica Duchen’s magical-realist novel Odette, in which the enchanted swan princess meets 21st-century Britain.

This remarkable narrated concert mingles selected readings from the book with the story behind Tchaikovsky’s creation ofSwan Lakeand its passionate, tragic inspirations. Award-winning, ballet-loving British violinist Fenella Humphreys embraces the great violin solos with which Tchaikovsky embroidered his score, as well as the closely related Violin Concerto; pianist Viv McLean evokes the influence of Chopin and Liszt on Tchaikovsky; and there’s plenty of humour, with works by Saint-Saëns and Gershwin. Share the enchantment through this joyous celebration of a beloved ballet, its composer, its fairy tale and what they can mean to us today.

Winner of the 2018 BBC Music Magazine Instrumental Award, violinist Fenella Humphreys enjoys a busy career combining chamber music and solo work. Her playing has been described in the press as ‘amazing’ (The Scotsman) and ‘a wonder’ (IRR).

A champion of new and unknown music, a number of eminent British composers have written for Fenella, including a set of 6 new solo violin works by composers including Cheryl Frances-Hoad, Sally Beamish and Sir Peter Maxwell Davies. She has been fortunate to record these over 2 critically acclaimed CDs for Champs Hill Records, both chosen by BBC Music Magazine as Instrumental disc of the month with 5 Star reviews, and the second also picked as Editor’s Choice in Gramophone Magazine.

Described on BBC Radio 3’s Record Review as an ‘absolutely exquisite album’, Fenella’s new CD, ‘So Many Stars’ with Nicola Eimer has just come out on Stone Records. Summer 2019 sees the release of Max Richter’s Four Seasons Recomposed on Rubicon Classics. Her teachers have included Sidney Griller CBE, Itzhak Rashkovsky, Ida Bieler and David Takeno, studying at the Purcell School, Guildhall School of Music and Drama, and the Robert-Schumann-Hochschule in Düsseldorf graduating with the highest attainable marks.

Viv plays regularly with the Adderbury Ensemble and has also collaborated with groups such as the Leopold String Trio, Ensemble 360, the Ysaÿe Quartet, the Sacconi String Quartet and members of the Allegri and Tippett Quartets. Viv has appeared at festivals including the International Beethoven Festival in Bonn, the Festival des Saintes in France, Vinterfestspill i Bergstaden in Norway and the Cheltenham International Festival in the UK. He has recorded for labels such as Sony Classical Japan, Naxos, Nimbus, RPO Records and future releases include a Gershwin cd for ICSM Records. Viv has also recorded regularly for BBC Radio 3 as well as for radio in Germany, France, Australia, Norway and Poland.

“ Viv McLean revealed extraordinary originality, superb simplicity, and muscles of steel hidden by fingers of velvet. He plays with the genius one finds in those who know how to forget themselves, naturally placing themselves at the right point to meet the music, this mystery of the moment.” Le Monde (Paris)

Jessica Duchen's novels have gathered a loyal fan-base and wide acclaim. Odette, published by Unbound in November 2018, is her sixth, but has occupied her for over 26 years. Ghost Variations(Unbound, 2016) was Book of the Month in BBC Music Magazine and was John Suchet’s Christmas Choice for the Daily Mail's Best Reads of 2016 ("A thrilling read" - John Suchet).

Jessica grew up in London, read music at Cambridge and has devoted much of her career to music journalism, with 12 years as music critic for The Independent. Her work has also appeared in BBC Music Magazine, The Sunday Times and The Guardian, among others. She was the librettist of Silver Birchby composer Roxanna Panufnik, commissioned by Garsington Opera and shortlisted for an International Opera Award in 2018, and she works frequently with Panufnik on texts for choral works.

Her further output includes biographies of the composers Erich Wolfgang Korngold and Gabriel Fauré, her popular classical music blog JDCMB, and the play A Walk through the End of Time.

And that's just for starters. Bit busy in these parts.

Meanwhile Viv is also playing the Rachmaninoff Second Piano Concerto in Southampton on Saturday night, 18th; and Mozart's A major Concerto K414 in Cockermouth on Tuesday 21st. Blimey, guv. But as he says, "It's going to be FUN." And Dave is busy too, with the Four Seasons in Gloucester Cathedral on Friday night, 17 November.

Here are the booking links.

Vivaldi, The Four Seasons: David Le Page and the Orchestra of the Swan, Gloucester Cathedral, 17 November

I think between us we seem to have a good bit of England covered, so do come along to anything and everything you like and can!
Posted by Jessica at 5:30 pm