Amazing, no? The above is in honour of the end of the Philharmonia's fabulous year-long series 'Infernal Dance', exploring the music of Bartok Bela at length and leisure.

What a way they chose to bow out yesterday: Duke Bluebeard's Castle, semi-staged with digital video projections by Nick Hillel's Yeast Culture (I had a sneak preview which I wrote about a couple of weeks back). Sir John Tomlinson as Bluebeard made the character utterly convincing - vulnerable, haunted, unable to face up to the possibility of a better future and consigning the blazing-bright Judith (Michelle DeYoung) to the secrets of the seventh door when she tries to come too close.

Nick's imagery, projected on 'turrets' on the stage set of the grey castle, grew in power and intensity, working with the music without ever intruding upon it: the close HD flowers with petals filling with blood, the sensual outlines and shadows of the lost wives wandering through time and space, and a huge coup de theatre in the blaze of golden light in the audience's face as the fifth door opens onto Bluebeard's realm - inference, perhaps, that we are his subjects? At the end Judith, on film, is trapped behind the closing of an origami eye. Or something. Whatever it was, it was heart-rending. Esa-Pekka Salonen conducted a passionate, detailed, precise account and Juliet Stevenson joined them on stage to read the prologue, with just the right mixture of detachment and hinted menace.

Curtain-raisers of Debussy's Prelude a l'apres-midi d'un faune and the Bartok Piano Concerto No.3 were enjoyable and appropriate, though I have to admit Yefim Bronfman doesn't quite do it for me: his playing is full of magisterial power, but there is little to appeal in terms of charm, sympathy or fresh insights. I keep going back to Schiff's fabulous performance at the Proms.

In other news - well, there's plenty today. Here is an update.

-- Marshall Marcus, head of music at the Southbank Centre for the past five years, is leaving to work with El Sistema and to develop its relationship with the UK. We'll miss him, but I can't applaud him more strongly for following his heart and devoting himself to this project. Like I keep saying, we need El Sistema and we need it now. More information from Norman over at Slipped Disc.

-- Speaking of El Sistema, the Simon Bolivar Orchestra and The Dude will appear for the London 2012 Olympic cultural stuff in....a deprived estate in Raploch, Scotland, where Sistema Scotland's Big Noise has really turned up trumps. There'll be a big outdoor concert against the backdrop of Stirling Castle on the shortest night of the year, 21 June. Plus a residency for the band at Southbank Centre for the next few days.

-- The London 2012 Festival has a website in which we can explore its full programme. Fine, but what will happen to the country's arts budget when it is all over? Remember, a lot has been siphoned off for the bottomless pit that is the Olympic Games.Will those who've lost out find any funding restored, or will their status quo quietly become the norm, or, indeed, the maximum upper limit?
Posted by Jessica at 2:53 pm

Roses are red, beards are blue... 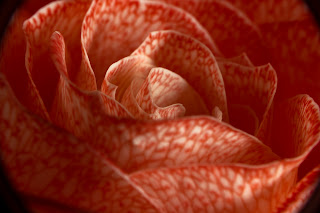 ...Bartok is brilliant, and so are you, Nick Hillel and Esa-Pekka Salonen. I was lucky enough to have a sneak peek at the visuals that Nick's studio, Yeast Culture, is creating for the Philharmonia's latest multi-media project: Bartok's opera Duke Bluebeard's Castle, the culmination of the orchestra and Salonen's intensive exploration of Bartok that has lasted most of 2011. The production tours in the UK and aboard from 21 October. My article is in The Independent today, and if you follow this link you'll also see a video from the orchestra showing how some of the film was made. Left, Bluebeard's roses appear to fill with blood.
Posted by Jessica at 8:27 am