Steven Isserlis is one of those infuriating musicians who writes as well as he plays. His latest book is just out and it is a revisiting of Schumann's Advice to Young Musicians, as tweaked for the 21st century (published by Faber & Faber). I went to talk to him about it - and also about his new recording of the Brahms Double and original version of the Op.8 Trio plus the slow movement of the Schumann Violin Concerto arranged by Benjamin Britten (yes, really), with Joshua Bell. Feature is out now in this week's JC and here's a taster. 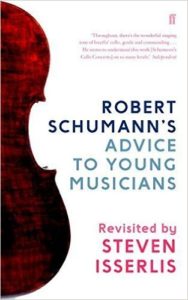 ....The question remains whether today's younger generation can share the attitude that music is something sacred, as he and Schumann both advocate. "It's not a sport," Isserlis declares. "I say it in the book and I've said it many times: music is not a sport and it should be taught as a mixture of religion and science. You find out as much as you possibly can about it and approach it with respect. You don't make it a vehicle for impressing people and showing off.


"Actually I think the new generation has this outlook still more, at least among violinists and cellists," he adds. "They really respect the music. I think we went through a bad phase about 20-30 years ago. But those in their late teens and early twenties today seem to have a much better attitude and are emerging much more rounded as musicians."
Read the whole thing here.
Posted by Jessica at 11:59 am Links to this post

If instruments could speak...

I've been having a little fun for Sinfini, "interviewing" two Stradivarius violins, the 'Gibson' (Josh Bell's) and the 'Messiah'; a Strad cello (Steven Isserlis's Marquis de Corberon); and Fritz Kreisler/Nikolaj Znaider's Guarneri del Gesu. If they could speak, is this what they'd tell us? Enjoy...

http://sinfinimusic.com/uk/features/2013/07/if-instruments-could-speak/
Posted by Jessica at 4:17 pm Links to this post

The Washington Post's Gene Weingarten has a fascinating article about what happened when Joshua Bell was persuaded to go busking to see how rush-hour commuters responded. Here's a taster:

"If we can't take the time out of our lives to stay a moment and listen to one of the best musicians on Earth play some of the best music ever written; if the surge of modern life so overpowers us that we are deaf and blind to something like that -- then what else are we missing?"

Read the whole thing here. Thanks to Alex Ross and Justin Davidson for the link.

Meanwhile, Josh has scooped the Avery Fisher Prize and has a new disc out (follow that link to his website for more details).
Posted by Jessica at 9:42 am Links to this post