Look what's popped up on Youtube: complete audio of Jonas Kaufmann's Winterreise recital at the Konzerthaus, Vienna, 6 April 2013. Helmut Deutsch is at the piano. Apparently JK was not feeling on best form just then - he was recovering from the lurgy that knocked him out of two Vienna Parsifals. It's remarkable nonetheless.

Prepare to listen by getting yourself a cuppa, a box of hankies and a DO NOT DISTURB sign.

(UPDATE, 5.40pm: An appreciative reader has just tweeted to remark that this is good alternative listening for anyone trying to avoid the Eurovision Song Contest tonight...)

Posted by Jessica at 2:15 pm Links to this post 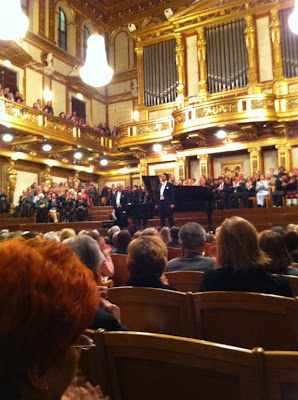 If you were wondering where I'd got to... Been here, hearing this. Above: Jonas Kaufmann and Helmut Deutsch take a curtain call in the Vienna Musikverein after what I think was the third of five encores.

Song recitals in the golden hall are not plentiful - mostly they are given in the smaller Brahmsaal - and this was Kaufmann's first "Liederabend" therein, following a highly successful run as Faust at the Staatsoper. It was a programme of Liszt, Mahler, Duparc and Strauss, which he and Deutsch introduced in Munich last summer (schedule here - Berlin tomorrow, Paris on Monday; London Wigmore Hall not until June, though). And if you think Vienna is not a place that can go nuts, think again. By the time the encores had rounded off with Strauss's 'Zueignung' and a rendering of 'Dein ist mein ganzes Herz' that could have turned even Tauber green with envy, your blogger and her companion were sobbing for joy along with the rest of the city.

Here is the full programme. And here is a video on Kaufmann's website introducing it. 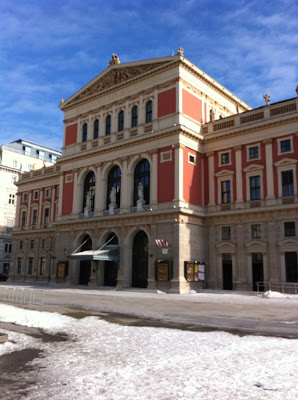 I won't keep you sitting here reading this blogpost all day, but a few highlights follow. First of all, Deutsch needs a credit all his own: the glowing, streamlined sounds that emerged from that piano would have wrapped Kaufmann's voice in pure gold even if the hall had not already done so. Deutsch has been Kaufmann's mentor in many ways and their partnership remains exceptional: they shine not merely as singer and accompanist individually, but as a duo even greater than the already phenomenal sum of their parts.


If any moment of the recital was any less convincing, it was the Duparc: a French group, even such a heady and sensual one, seemed to sit comparatively oddly against the rest of the programme, something brought into focus when Kaufmann launched into his home heartland with the Strauss Lieder immediately afterwards. Duparc is more Wagnerian than Faure or Debussy, yet it could be that these exceptional, kaleidoscopic songs, which feel like musical incarnations of Odilon Redon's late pastels, still need to settle to reach the same level of assumption that Kaufmann has achieved in Strauss. It was the Strauss that stayed with us: laughter for 'Schlechtes Wetter' (it was snowy, well below freezing and very windy out, and we'd have liked to sample whatever cake Kaufmann and Deutsch decided to bake); tears for a 'Befreit' almost too pain-filled to listen to (many pairs of spectacles were removed around us in the hall).


Dein war unser ganzes Herz.. It's not the first time I've felt that Kaufmann is an artist who thrives on encores. This was when he seemed to relax the most and, frankly, let rip. Like most excellent artists, he seems fed by the audience's energy, which is as it should be. There's something about the creation of atmosphere in a performance that has less to do with the individual technical details than with the relationship between the performers, the degree they can communicate their mastery and passion for music to the audience, and much to do with... well, if anyone could articulate exactly what that "X factor" is, we wouldn't need daft TV programmes named after it. 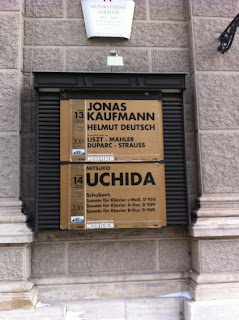 It's when artists start to fly and take us up to 33,000 feet with them. It's when you can't believe the beauty in your own ears, and you can't hold onto it, either, but you're trying to in any case, and you know you are hearing something you'll never forget for the rest of your life. And you know it when you hear it, and you don't hear it very often. Perhaps 19th century commentators could have recognised its necessity by their very nature and expressed it in terms of touching something divine, which is what "high art" aspired to do. Such terminology is somewhat frowned on today. In a world that's terrified of "elitism", anything that sounds too good will be bashed. But when you get down to it, that is what's happening and that is what great artistry is all about, and that is what all the other very good but less "great" artists wish to do, and that is why we become musicians, because music can do this and that's why it exists. And when it reaches that rare level, you feel lucky to be alive to hear it. It's real. It's true. So just get over it, accept it and open your ears.


And as if this wasn't enough...the day after, we attended Mitsuko Uchida playing the last three Schubert sonatas - Schubert in Vienna in the snow, with the B flat Sonata a crowning, aching, lonely wonder. Add to this a visual feast at the recently renovated Albertina gallery - two floors of an Impressionist exhibition (yes, with plenty of Redon pastels), one floor of the permanent collection and a top floor of a huge, jaw-dropping and revelatory exploration of Magritte. To say nothing of lunch at the Cafe Central, a romanesque-arched temple to kaffee und kuche once frequented by Trotsky, Freud and many, many more. We had their berry strudel, packed with kilos of purple fruit, and their trademark cake: chocolate, orange and marzipan with the lightest texture and finest flavours...


...look, as the Beatles would say, it's been a long, cold, lonely winter, so please forgive a few of the superlatives above. Right now, I think we deserved to enjoy them a little. All together now: "Wien, Wien, ach, du allein..."