What do conductors do, anyway? 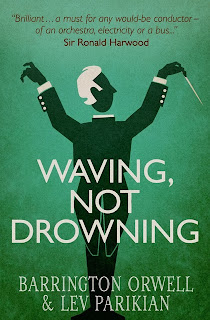 I'm sure the answers to that question are many and varied. But here's one for the mix: some of them write books. I've put a few million-dollar questions to Lev Parikian, who together with Barrington Orwell has written a singularly sparkly volume, Waving, Not Drowning, about the mysterious art of the musical maestro - with tongue located in cheek.

Lev is, of course, a conductor himself; he specialises in galvanising into action a range of enthusiastic amateur orchestras. Who better to tell us what's really going on on that podium? And a few words, too, about the women conductors' issue...


JD: Lev, what made you want to write a book about conducting?

LP: There are plenty of serious books about conducting, and quite right too, for it is a serious matter. But I felt there was scope for a less earnest approach that would nevertheless contain, as one reviewer put it, "truth within the comic camouflage”.
Waving, Not Drowning started as a series of articles for Classical Music magazine highlighting some of the more mockable aspects of the noble art of conducting (and it is a noble art, although we are a more mockable breed than most, if only we realised it). From these frivolous drivellings emerged the idea for a book which I hoped would amuse, entertain and enlighten in equal measure. Whether or not it does any of those three things, it kept me harmlessly occupied and off the internet for a few months, so that’s no bad thing.

JD: So tell us...what does a conductor really do, and how?

LP: Aagh, you’ve gone for the impossible questions first. It’s tempting to say 'ask me again in thirty years', but I'm not sure I'll have an answer even then.
So here goes...

What do they do? They enable a group of musicians to give the best performance available to them of any piece of music.

How do they do it? That's more difficult, because there are as many ways of conducting as there are conductors. But pick a few from the following: gestures, psychology, words, force of personality, ears (or "listening skill solutions” as we probably have to say nowadays), intimate knowledge of the music, intellect, experience, hard work, metaphors, similes, analogies, mime, encouragement, cajoling, threats, amusing anecdotes just before the break, telepathy, magic dust, did I say hard work? I’m sure I’ve missed a few out.

I think conducting is often done with the ears  – the conductor is the person on the stage best placed to hear the music, so has the responsibility for shaping the balance. But they also need to be able to engage all the musicians so that each one of them feels they are contributing to the whole – that’s where the psychology comes in. And of course an ability not only to pick (and transmit) the best tempo but also to convey the character of the music with gesture alone is a great plus. As the incomparable Professor Etwas Ruhiger (profiled in Chapter 5 of Waving, Not Drowning) put it: “If music iss like hippopotamus, do not be condectink like cherbil."

JD: Why do you think there is such a mystique around the profession of conducting? Is it justified?
LP: The mystique of the conductor is understandable – he or she is the only person on stage who makes no sound (there are some exceptions...), yet is the first to receive the plaudits. And the parallels with wizards are all too obvious: the wand, the air of mystery, the ‘look at me’ aura.
But the fact remains that without musicians, the conductor is just an idiot waving his or her arms around. Controversial statement alert: a lot of the time, the players can get on just fine without conductors. Part of the skill of conducting lies, I think, in recognising when you’re needed and knowing what to do about it (which is a different matter entirely).

JD: What would be your response to the "Oh, conductors just wave their arms around" viewpoint?

LP: I’d reply by saying that it depends on the conductor. Then I’d invite whoever said it to come and have a go themselves and have a chat afterwards.

JD: What, for you, are the best things about being a conductor? And the worst things?

JD:  As you know, I've been pretty involved in the issue of women conductors, or lack of them. How can we encourage more women to become conductors, and help those that already exist to get a fair hearing?

LP: Challenge those who disagree with or ignore the idea of women conductors. Go on challenging them. Don’t give up until all talk of “women conductors” has disappeared and we talk only about “conductors”.

This interview with Mei-Ann Chen seems to me to exemplify a positive and constructive approach from an obviously extravagantly talented and motivated conductor: http://www.huffingtonpost.com/glassceilingcom/how-conductor-meiann-chen_b_4276015.html