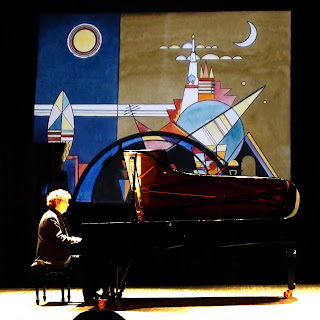 Last winter I took a very snowy trip to Paris to see the world premiere of pianist Mikhail Rudy's astonishing venture into musical animation. Having unearthed Kandinsky's original designs for a 1928 theatrical staging of Mussorgsky's Pictures at an Exhibition - they were quietly awaiting attention deep within Paris's Pompidou Centre - Micha conceived a way to update this ever-musical artist's work for a modern context. Joining forces with an expert animation company, he set about breathing life into Kandinsky.

The result? Micha plays - necessarily in perfect coordination with the film - while Kandinsky dances. The animations don't overload the music with extraneous effect. Different images assemble, deconstruct, kaleidoscope; they're often playful, sometimes ironic, always cool and light in touch. Now Micha is on a world tour with the project: given the blessing of the Pompidou, which is putting out a DVD, he has just taken it to the US and Russia for the first time. And this week you can catch the UK premiere in the Turner Sims Hall in Southampton on Thursday night (17 Nov) and at the Wimbledon Festival on Saturday (19 Nov).

It's a new slant on Mussorgsky. But intriguingly enough, it is far from being the first time a pianist has done his own thing with this music.

Since Horowitz, who coined the term 'pianostrate', many performers have taken as read carte blanche to make their own additions to Mussorgsky's already dazzling score. Partly this is down to the popularity of Ravel's orchestration, which appeared to make people think there was more to the piece than its original composer had put into it himself. So pianists are divided, roughly, into those who stick to the text and those who...don't.

When I wrote a 'Building a Library' piece for BBC Music Magazine a few months ago looking at different interpretations of Pictures, it became clear that Sviatoslav Richter's legendary live recording from Sofia has its revered status for a good reason: sticking faithfully to the text, Richter put in all the colour, magnificence and orchestral effects the piece could hope for through his playing alone. Of the 'pianostrated' ones, Horowitz was incomparable, though Leif Ove Andsnes's Pictures Reframed proved fascinating in its own way. Mikhail Pletnev's, while evoking astonishing, multifaceted, eleventh-dimension sounds that you wouldn't imagine a piano could produce, was cold as ice. Vladimir Ovchinnikov's recording was a sure sign that this excellent former Leeds winner remains seriously underestimated today, and among historical recordings Lazar Berman's remains a personal favourite of mine. I listened to loads of good ones, a few less good, and a monstrous heap of CDs that were well-played, faithful renditions of the score without a hint of interest or originality about them.

Anyhow, that is by-the-by. If you're within batting distance of Wimbledon or Southampton, don't miss Micha's audio-visual treat this week.
Posted by Jessica at 9:18 am