One woman, three harps and a very long journey 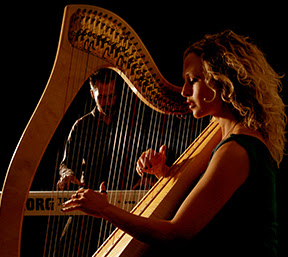 The Australian Festival of Chamber Music kicks off again in a few weeks' time and though I am sick as the proverbial parrot at not going (I was there a year ago for Being Mrs Bach) I'm only too happy to thump the drum for this marvellous, sunny, eclectic jamboree complete with tropical skies, ice cream galore and even humpback whales to watch.

Several performers besides the artistic director, Kathy Stott, are travelling over from the UK and one of them is the extraordinary harpist Ruth Wall, who's setting out from Land's End with two of her three harps and meeting another one there. I had a super chat with her yesterday... First, here she is with partner Graham Fitkin, as FITKINWALL:

From her home near Land’s End in Cornwall, Ruth Wall has a longer journey even than most others to Townsville, Far North Queensland. But then, she is used to long spans, musical as well as physical. Her repertoire ranges from the 13thcentury to the cutting edge of present-day new works. Her partner is the composer Graham Fitkin and the pair collaborate as the duo FitkinWall. She’s toured with Goldfrapp, been involved with sound installations and theatrical productions - not least the aerial theatre company Ockham’s Razor - and she makes musical arrangements and transcriptions of her own. And she composes.

This multifaceted career began with her training in Scotland: “I grew up in the Highlands and I had a great harp teacher who was from the classical sphere - but there’s a great folk tradition up there and she taught me a lot of traditional music, so I had a mixture of both,” Wall says.

“In my twenties I was introduced to early harps by a friend in Scotland who makes them, so I started getting interested in the Renaissance bray harp. I just heard it and thought I’ve got toplay this instrument.” What’s so special about it? “It's like a sitar but with knobs on: a big, huge range and a really big, buzzy sound.

“The same friend, Bill Taylor, introduced me to the Gaelic wire-strung harp as well and that was love at first hearing. I was excited by those two instruments, even though I knew it would take more than a decade to learn them properly.”

She’s not exaggerating: “Especially the wire-strung harp - it’s as different as you can get from playing a concert harp. It’s almost as different as playing the tuba! You need to have nails; you’re in literally the opposite hand position from the concert harp; the string intervals are tiny; it’s strung with metal; and you have to stop every note as well as play them. So it’s a very complex little instrument – but very beautiful.”

Transporting them from Penzance to Townsville is no laughing matter. “Kathy [Stott] and her team have organised for my bray harp and wire-strung harp to be picked up, so they’re going to be out of my hands from next Monday,” says Wall, “and I won’t see them again until 22 July, so it’s a long gap and I’ve never had that before. As for the concert harp, they’re renting one for me in Australia so that’s another new thing: to play really virtuosic music on a harp I’ve not played before. I’m trying not to worry about it because there’s nothing I can do about it!

“The two that are being flown out get held hostage in Brisbane for a week. I’ll have to detune them and then tune them up gradually after I arrive. It’s always a little bit heart-in-mouth when there’s a long journey. Even if you fly with them and carry them yourself, it can be difficult - I’ve had a hole in the harp before now. Hopefully everything will be good and nothing will happen…”

Wall is taking part in no fewer than 12 festival events, playing a range of music that would make most other musicians sweat at the very thought. “You’ll hear some very “harpy” French repertoire, including Ravel’s Introduction and Allegro and Debussy’s Sonata for Flute, Viola and Harp - those are the biggest pieces for the concert harp. Then I’m playing with Wu Man, the Pipa player: more like a folk piece in style, based on traditional Chinese music. I’ve made an arrangement of that and have been transcribing it in detail, which takes a long time, but is great fun. 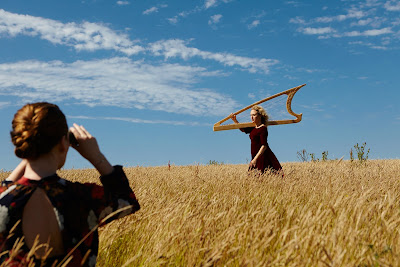 “Then I’m working with Lotte Betts-Dean, the singer, on an Irish piece called 'My Lagan Love' and a Dowland song, ‘Flow my Tears’, which I've arranged. On the Bray harp I’ll be playing some early music from the 13thcentury by Machaut, and on the wire-strung harp quite a long piece that I wrote myself, Pibroch Patterns based on classical bagpipe music from the Highlands.” Bagpipes? There are some similarities in sounds and techniques, Wall: says: “The bagpipes have a long drone which is similar in sound to the wire-strung harp’s one. As for the music, it’s difficult to know for sure because not a lot of traditional Highland music was written down - it’s an aural tradition. But there are little bits which one can catch that are connected with music of that time.”

The festival will be keeping Wall extremely busy, but she is thrilled to be collaborating with so many different musicians, most of them for the first time. “I just love working with other people,” she says. “The harp can be a lonely instrument, unless you play in orchestra, which I don’t. I’m looking forward to playing with all these musicians - Lotte and Wu Man and the Goldner String Quartet and more!”

She knows the climate may prove a tad challenging for the instruments: “Harps really don’t like changes in temperature, humidity, etc - and in particular the wire-strung harp goes out of tune wildly and is very difficult to restring if anything goes wrong, so I just have to hope and pray that nothing happens! But I know what to expect. It’s going to be challenging. There won’t be a lot of free time and I’m going to be doing a lot of tuning.”

Nevertheless, it’s a fantastic chance to evangelise for an instrument that is as ubiquitous in imagery as it is rare in practice, and as beautiful as it is challenging to play. I used to have a yen to learn the harp myself, but my parents weren’t having any, I remark. “You should learn!” Wall enthuses. “It’s never too late…”

If JDCMB changes its name someday to “Harping On” - well, you’ll know what happened.

Meanwhile, you can find Ruth's line-up of AFCM performances here.

Photos via ruthwall.co.uk
Posted by Jessica at 5:00 pm Links to this post