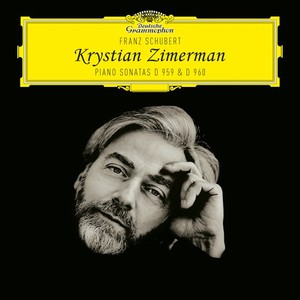 It's out. And it was worth the wait. Pianophiles have hung on for a new album from Krystian Zimerman since 1994, when his Debussy Preludes won a Gramophone award. Concertos, yes; a rather wonderful piano sonata by Grazyna Bacewicz along with her piano quintets, yes; but all alone, no. Finally here it is: Schubert's A major Sonata D959 and B flat major Sonata D960.

These are unlike any other interpretations of these works that I've heard: he makes them entirely his own, and they scrub up like buried treasure after a bath. Yet with such eloquent phrasing, you feel Schubert himself is speaking to you directly, with something urgent, profound and life-affirming to communicate. If you only listen to one thing this week, make sure it's this. Incidentally, if you're a vinyl nut, this album will soon be available on LP as well.

Here's one Spotify extract...this is the Andante from the B flat major Sonata.


Back in May, into my in-box popped a message from DG: could I go and see Krystian, interview him and write the booklet notes? ("Er, let me have a think and get back to you..." said I, or not exactly...). Here are two little tasters of the resulting text, in which he talks about his view of the sonatas and the genesis of this project. Lots more inside the CD booklet.

JD: How would you characterise these sonatas?

KrZ: I think they contribute significantly to our view of Schubert’s greatness. He switches into a different gear, daring radically new ideas in harmony and polyphony. Compared to his earlier sonatas, they could almost be by another composer.

The slow movements of the D959 and D960 sonatas are maybe the saddest music I know: the major keys are even sadder than the minor, because this is complete resignation, complete acceptance, perhaps thinking of leaving this planet and ending life. The middle of the A major’s slow movement is revolutionary. It’s a milestone in music: a tremendous tempest where all hell breaks loose. You feel it almost foreshadows Wagner, because it looks incredibly into the future. Yet both sonatas have scherzos that are full of humour, and gorgeous last movements in which Schubert integrates so beautifully the singing character of the cantilena.

I find the repeats absolutely necessary. In D960 the low trill in the left hand occurs fortissimo only at the end of the exposition, in the first-time bars, and it’s completely different from the other three times we hear it. But also, when you return to the beginning it sounds transformed after you’ve heard the whole exposition. The movement is long, but I have tried to choose a tempo that is always fluid, with plenty of breathing.

JD: The recording venue was the Kashiwazaki City Performing Arts Centre, Japan. Kashiwazaki is the location of a gigantic nuclear power station. After a terrible earthquake there in 2007, you gave a fundraising recital for the town – and to thank you they later offered you a week’s use of this hall?

KrZ: Yes, I am extremely grateful to the town of Kashiwazaki and its mayor, Mr Hiroshi Aida. The hall was built after the original Performing Arts Centre was destroyed in the earthquake, and is designed by a student of the great acoustician Yasuhisa Toyota. I thought it was among the best acoustics I had encountered and I thought I would love to record there. In Toyota’s halls, every note is clear, yet each is in a cushion of warm surroundings. For example, playing in Suntory Hall feels like flying – the piano opens up and you can do incredible things because you are so inspired by this acoustic.

...We arrived to record the Schubert… in three metres of snow. The staff were unbelievably generous, providing heating, food and four people to run everything smoothly, even when we worked until 2am. I am also very grateful to my excellent sound engineer, Rainer Maillard, who agreed to continue working that late. We recorded everything using 32-bit technology, perhaps for the first time on Deutsche Grammophon.

The snow was so deep that one night we had to shovel our way out. But inside, it was another world and I was able to spend five days completely immersed in Schubert.


If you enjoy reading JDCMB, please help to fund its Year of Development by making a donation here.