"The peculiar evil of silencing the expression of an opinion is that it is robbing the human race... of the opportunity of exchanging error for truth." (John Stuart Mill) 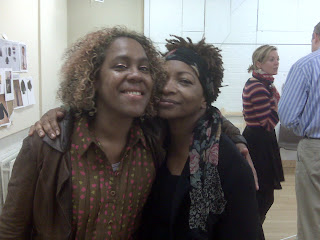 Yes, the new opera by composer Errollyn Wallen and playwright Bonnie Greer (pictured: Errollyn, left, and Bonnie, in rehearsals), opens tonight at the ROH Linbury Studio. It's the story of the run-up to Bonnie's appearance on the BBC's Question Time alongside...That Politician. What emerged from her experience is a picture of the state of the nation: how we see ourselves, our country, our fellow human beings and freedom of speech. My article about it is in today's Independent. As we point out in the feature, it's not every day you hear the words of John Stuart Mill being sung at Covent Garden.

Here's a taster, from Bonnie:


"Any organisations or groups of people that prevent others from expressing a legitimate opinion, whether in print or in person, are absolute enemies of democracy...That's the reason I said yes. I'm the daughter of a man who grew up under racial segregation and couldn't speak out, so there's no way I'm going to be part of anything that won't allow a person to speak his or her mind. I think some of the great and the good were upset that I did this [appearing on Question Time]– and they were even more upset that it turned out to be OK. This is about freedom of speech and expression; about saying yes to the tumultuous nature of democracy."