Time to call time on minimalism? 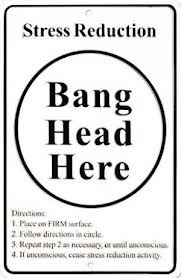 Yesterday I composed a piece of minimalist music. Maybe I've heard one piece of it too many of late, and it occurred to me that perhaps Philip Glass should have patented his style so that other people couldn't pinch it and do it less well than he does. In any case, he has distanced himself from the term 'minimalism', and I don't blame him, and I rather wish others would do the same.

The recipe for my piece involves purling baseline going up and down in triplets across a minor triad, alternating tonic with subdominant, switching around every two bars though sometimes extending longer or contracting to a more rapid harmonic rhythm, pedal point at the bottom. Add a counter-rhythm - a syncopated pulsation a bit like Morse code (e.g., dit-dit-daa-daa-da-de-dit-dit-daa-daa-da-de etc). Place a few sustained notes oozing in and out high over the top. Then add a counter-tenor with his own line that woogles in and out. Ooh yes. Mustn't forget the counter-tenor. Mix in a sample of recorded read text or a line of a folk song and repeat at irregular intervals. Finally, place over beautifully filmed images that may involve urban blight or war damage. Continue for ten minutes. (Or maybe it just feels like ten minutes.)

I thought this up when walking home from the station (c 4 mins), and when I got in I tried parts of it on the piano, humming a sort of imitation counter-tenor bit and imagining the folksong addendum - for argument's sake, I picked Scarborough Fair, but only the first two lines of it, of course (any more might risk requiring actual thought) - while the news was on on TV, with sound off.

The stupidest thing of all is that it sounded, briefly, like a real piece, and it "fitted" many of the images we saw.

I am not a composer. I do not imagine music from scratch. This bald fact suggests to me that actually what I'd produced wasn't music and I didn't write it.

Isn't it time for a change? This style was flourishing in the 1980s and now it is 2015. It was at first, as some might put it, 'historical necessity'. It was necessary for the world of art music to re-establish a solid, immovable sense of tonal root after decades in which harmonic and indeed rhythmic structures ceased to exist; arid, disorientated decades in which the audience was basically told to naff off if they didn't like what they heard - and did so in droves. Then statement and restatement, mantra-like, soothed and bludgeoned us into knowing that we're here, now, repeating and repeating. Daily routine, ennui, chain stores, peace of a kind. We know where we are.

Please send chocolate.
Posted by Jessica at 10:06 am

Email ThisBlogThis!Share to TwitterShare to FacebookShare to Pinterest
Labels: Minimalism

Magic Mountains 3: a return to Lucerne

After visiting Gstaad (my review of this is over at Amati.com) I took an interesting train journey across the country to check out the latest developments in the mighty Lucerne Festival, which is still the big sibling to every other festival in Switzerland. It has introduced free pre-concert concerts: totally relaxed events, but with no compromise on the music-making. What I love about Lucerne (among many other things) is that although it could easily rest on its laurels, it never does so.

My report is in today's Independent, but in the Observations section which isn't online. Director's Cut below.

Torrential rain is driving down upon Lake Lucerne, but despite the soggy conditions a sizeable queue is forming outside the KKL (the Concert and Convention Centre Lucerne). Music-lovers bearing all shades of macs and umbrellas crowd under the waterside building’s substantial overhang, waiting to be admitted to the Lucerne Festival’s latest innovation: 40 Minutes, essentially a short pre-concert concert. But it’s a performance with a difference. It’s absolutely free.

Michael Haefliger, the festival’s artistic and executive director, intends this brand-new series to offer the public “music without borders”. “We want to attract everyone,” he says, “without any limits.”

It would have been easy for this long-established Swiss festival, founded in 1938, to rest on its plentiful laurels – after all, it is fairly evident, looking around Lucerne, that there is no lack of cash here. Yet Haefliger, surrounded over the years by such vital figures as the composer Pierre Boulez and the late conductor Claudio Abbado, has continually instigated new developments to refresh and renew the artistic programme and its audiences. This is the latest – and it seems to be working. Word has spread fast. Performances are held at 6.20pm in the KKL’s smaller concert space, and when the doors open it is chockablock in a matter of minutes.

The ambience is radically different from the more formal concerts in the main hall. The normal seating is complemented by some bean-bags at the front, which are rapidly snaffled by a few alert children. When the audience comes in the orchestra is already on location, the players wearing mufti and chatting to one another or practising quietly; present, too, are soloist and conductor, again in everyday clothes, ready to perform just one piece.

But there’s no compromise on quality. I am hearing the Chamber Orchestra of Europe, conducted by the 86-year-old grand maestro Bernard Haitink, with violinist Isabelle Faust the soloist in Mozart’s Violin Concerto No.5. This is as world-class as anything in the entire festival. First, the music journalist Malte Lohmann, acting as host, interviews Faust and Haitink for the audience, discussing with the former the agonies and ecstasies of playing Mozart and with the latter his special relationship with this orchestra.

Perhaps the key to the success of 40 Minutes is that the atmosphere is informal, the tone relaxed, but the artistry incomparable. There’s talk, but no talking down.

Monitoring may be needed to see whether 40 Minutes helps to recruit new audiences for the big concerts too, but the demand is obvious, and with no excuse not to come in and give it a whirl, it’s hard to imagine why anyone wouldn’t. Lucerne doesn’t need to give away concerts for free – but it has the luxury of being able to do so, and one hopes that the effort will pay dividends in the long term, encouraging first-timers with nothing to lose. Other venues could do worse than follow suit.

The Goldberg Variations: changing the world for 70 minutes


If we didn't have the BBC, guys, we wouldn't have this: András Schiff playing the Bach Goldberg Variations at the Proms, fabulously filmed, televised yesterday and available to watch on the iPlayer
for 29 more days, here. I was away in Switzerland on the day itself, 22 August, and am glad to be able to experience it after the event.

It's playing in which not just mastery but wisdom, balance and humanity shines out of every note of this intimate music, in which the Royal Albert Hall is somehow transformed into András's living room - and in which a state of grace seems to surround the pianist and, with him, us, the listeners. In the introductory interview with Kirsty Wark, András explains that it doesn't matter whether or not you are an atheist or religious, or in what way; Bach was, and you have to enter that zone if you're going to play his music. In he goes. And during those 70 minutes of the Bach's duration, the world changes.

Do yourself a favour. Hear it today.

UPDATE: The filmed version of this performance is unfortunately not available outside the UK, but readers overseas should hopefully be able to access the audio-only recording on the iPlayer, here: http://www.bbc.co.uk/programmes/b066zjyt
Posted by Jessica at 10:02 am

I offer some strong words today over at Amati.com about the refugee crisis - and inspiration from organisations such as Musicians Against Borders who are collecting musical instruments to donate to those stranded in the Calais 'jungle'. http://magazine.amati.com/149-comment/comment-music-aid-refugees.html
Posted by Jessica at 9:39 am 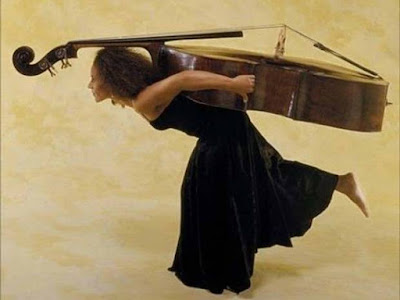 Fascinating chat with the one-woman dynamo Chi-chi Nwanoku, double bassist, broadcaster and mover and shaker, about the new orchestra she has formed. Chineke! is Europe's first symphony orchestra made up entirely of black and minority ethnic players, devised to showcase and support the talent of these underrepresented musicians.

With a ringing endorsement from Sir Simon Rattle, and with Wayne Marshall on the podium, the orchestra hits the Southbank for its first concert on 13 September, opening the concert with the Ballade by the wonderful Anglo-African composer Samuel Coleridge-Taylor. It also features the Elegy: In Memoriam - Stephen Lawrence by Philip Herbert, and concludes with the Brahms Variations on a Theme of Haydn and Beethoven's Symphony No.7.

I went round to see Chi-chi (and her lovely cat) the other week and the article is in the Independent today. Read it here. Tickets for 13 September are going fast, so book soon.
Posted by Jessica at 8:58 am