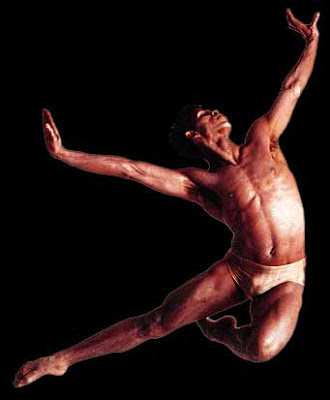 Went to Mayerling at Covent Garden last night, starring the one and only Carlos Acosta as the crazed Crown Prince Rudolf of the Austro-Hungarian Empire (pic above not from this ballet, but hey...). Feel teh power. It's not just the jump, the stage presence, the technique, the body - this guy can convey character through movement with one gesture, the dissolution of a whole psyche in a single step. His Mary Vetsera was Leanne Benjamin, transforming from ditzy 17-year-old to breathtaking sexpot in the flash of a toe, her limbs as free as flames. Supporting roles - surely as demanding as any lead - included more of the Royal Ballet's finest, Mara Galeazzi, Gemma Bond, Zenaida Yanowsky and plenty others. The only weak spot was the orchestra, which had a bit of an off-night, but let's forgive them this once.

I wonder if Mayerling is deliberately a twisted inversion of The Sleeping Beauty? Instead of awakening the heroine, the prince kills her and himself. He's led to her by another woman - this Lilac Fairy is his ex-mistress. The Rose Adagio? No, the Mephisto Waltz: stunning choreography for sought-after woman - a prostitute - and four lovers. The Wedding pas de deux at the end of Act I is effectively a rape, in which the woman is horrifically complicit, and features a fish-dive pose. The young girl grows up - Mary is a child with her hair in ribbons at the beginning - but her fulfillment is a suicide pact. The King and Queen - Emperor and Empress - are at it too, both with lovers attendant. There's a hunting scene...in which the prince accidentally kills a member of the court. The opening scene is called 'prologue', and it's not a christening but a funeral.

When Mayerling was first performed, back (if I remember right) in the 1980s, it got a lot of stick from the critics. Too many characters - how do you keep track of all Rudolf's women?! [you read the story]. You can't convey in dance that Countess Larisch is his ex-mistress! [you can, very effectively]. What are those Hungarians doing, whispering in Rudolf's ear? You can't do separatist politics in dance! [never mind the whispering, watch 'em dance!] And all those prostitutes parading their wares, yeuk! [ref Schiele, with Mitzi Caspar looking fresh out of Klimt?]. What a very nasty story! [so's Romeo and Juliet]. Twenty-five years on, or thereabouts, this ballet is clearly one of Kenneth MacMillan's masterpieces.
Posted by Jessica at 8:24 am