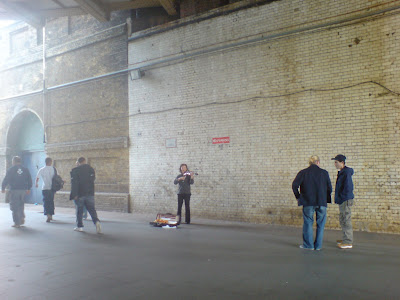 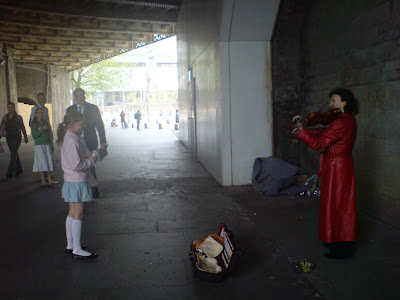 I spent part of Tuesday afternoon standing under the Waterloo railway bridge watching Tasmin Little playing Vivaldi and shouting "Give us a copper!" to the passing builders - and (above) performing 'Happy Birthday' for a celebrating child. Yes, the boss asked us to do a London edition of the Washington Post/Josh Bell experience - and it was fascinating to see where the results were similar and where they differed. Although the actual statistics were in the same general ball park, we found the experience anything but relentlessly depressing.

Londoners like music, their children really love it and many people knew they were hearing something special. I think they just didn't want to have to pay for it.

Read all about it in today's Independent, here.

BTW, the coverline is FIDDLER ON THE HOOF. But guess which musical, opening in May, is advertised on the back?!? I'm assured that this is complete coincidence.
Posted by Jessica at 7:43 am