Radiant Leonore, but trouble down t'pit 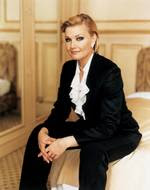 Karita Mattila must have been born to sing Fidelio. Opening afternoon (a Sunday matinee) found the Finnish soprano conquering Covent Garden at one stroke. She's about six foot tall with a knock-em-dead stage presence; this was the first time I've been convinced that poor little Marzelline could have been taken in. Her voice has the strength and purity of a laser. Never mind that The Times ran one of the bitchiest articles imaginable about her the other day (no wonder artists don't like talking to British journalists - this was so unnecessary, I don't see the point of writing pieces like that, I mean, really...). She's one of the greats; I doubt that Leonores get better than this.

A pity that the rest of the show wasn't consistently up to her level. First, the opening bars of the overture revealed some nasty stuff in the pit, namely the horns. I suspect it was widely assumed around the house that they'd spent Sunday lunchtime in the pub, but this morning Tony Pappano told me that it was more serious than that: the first horn had hurt his lip and as a result there'd been a last-minute cabinet reshuffle, with first horn playing third, etc. I'm not sure that the rest of the orchestra recovered from the experience; there was some uncomfortable ensemble (or lack of) and generally the effect felt lacking in tension, especially compared to Mark Elder's recent account at Glyndebourne. But there were some fine moments - a wonderful hushed tone at the beginning of the magical Quartet - and perhaps things will settle down as the run progresses: the ROH hasn't done Fidelio for around 15 years.

Production: fresh from the Met, directed by Jurgen Flimm and set in a prison in the 1940s or 50s. A world where guns are casually tossed about, where Pizarro wields a champagne bottle in one hand and a pistol in the other; the prisoners are kept in cages three storeys high. Leonore, not Rocco, takes it upon herself to let them out for the King's name day, and they emerge in absolute silence before the chorus begins - the effect is both touching and startling. Anyone hoping for the Leonore No.3 Overture before the last scene will be disappointed - but the opera works perfectly well without it, since the duet between Leonore and Florestan acquires a climactic significance that can sometimes be dissipated by the interpolated orchestral work.

Ailish Tynan is a fantastic Marzelline, Eric Halfvarson and Terje Stensvold excellent as respectively Rocco and a ferocious, neo-Con-style Pizarro. The big surprise, literally, was Endrik Wottrich as Florestan. He's huge. Massive, like something out of Lord of the Rings. He looks like he spends his life body-building. And then he opens his mouth and out comes - this rather odd voice. Bizarrely small, given the size of the soundbox. Unfocused, tight and lacking resonance, with rapid continual vibrato but no real centre to the tone. A physical match for Mattila, but certainly not a vocal one.

Of course, anyone who was anyone was there, my dears. We ran into Elgar expert Michael Kennedy, Sunday Times critic Hugh Canning, politician-turned-presented David Mellor and the inimitable Sean Rafferty from Radio 3's In Tune, and said hello to fellow blogger Stephen Pollard, who's already written up the show...we have some pretty different opinions, but are in perfect accord over Mattila.

UPDATE: Tuesday, 1.30pm: Fellow London music blogger Intermezzo, whom I've shamefully neglected to add to the blogroll until now, was at Fidelio too, struggling with the sightlines, feeling seriously scathing about the orchestra and has no time for the first horn...
Posted by Jessica at 3:42 pm