Sevdah at the Barbican 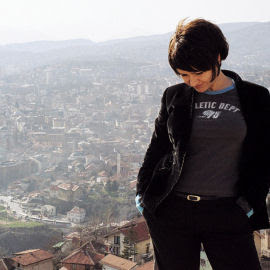 Next week (1 June) the Bosnian sevdah singer Amira is playing the Barbican, part of a celebration of Gypsy (and Gypsy-influenced) music and film. She's also at the Royal Northern College of Music in Manchester the next day. Good piece about her in today's Guardian:

All who survive a war remain scarred, each in their own way. For Amira, who was studying economics when Yugoslavia brutally disintegrated, war pushed her into song. And not just any song, but sevdah, the ancient lyric ballad of Bosnia. Sevdah - the word is Turkish and suggests desire, yearning, thwarted love - has existed for hundreds of years in this region, often composed of just a voice and a saz (a Turkish lute). Yet it took Bosnia's suffering to focus the world's attention on this small nation's music. Sevdah bears comparison to Portuguese fado and Spanish flamenco; all three are vocal arts rooted in Arabic courtly love songs from a millennium ago. Amira, who comes to the UK for the first time this week and whose debut album, Rosa, is a recording of startling beauty, looks set to do for sevdah what rising Portuguese star Mariza has done for fado.

I am going to Bosnia on 7 June and will hopefully be learning much more about sevdah, the war and musical healing.
Posted by Jessica at 8:19 am