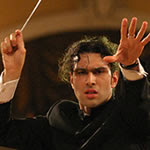 Seventy-five years ago today, the London Philharmonic Orchestra gave its first concert. On the podium was its founder, Sir Thomas Beecham. Tonight at the Royal Festival Hall the LPO is performing a celebration concert for its big birthday, with its new principal conductor, Vladimir Jurowski (left), and it's a programme to adore:

Richard Bissell, by the way, is the band's very fine First Horn. There's no need to introduce Pollini, but I'd like to say that he's one of the pianists I have most admired and respected all my life. An interview I did with him a few years ago left me with the impression that he's a mensch: a person of absolute integrity who lives and works according to strong ideals. No pretence, no fuss, no nonsense: simply the real thing.

Should be an evening to remember.

Here's a more recent interview with Pollini by Richard Morrison (The Times, 28th September). And to inspire, here's the maestro playing the second movement of the concerto, with Abbado conducting.