A birthday present from OC 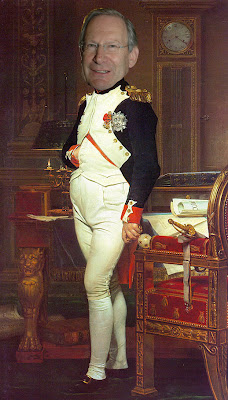 No, you're not on the wrong blog - this is JDCMB. But our dear friend Opera Chic is a dab hand with Photoshop, which JD ain't, and sent me this stunning birthday present last week, inspired by a press release I forwarded to her that was entitled, pricelessly enough, JOHN ELIOT GARDINER RE-OPENS OPERA-COMIQUE IN FRONT OF FRENCH CABINET. (Here in London I have a very nice French cabinet that we bought on E-bay. I think it's walnut wood.) Salut, Maestro Jean Eliot Jardinier! Et merci bien, chere OC!

The serious point, though, is that Paris's historic theatre was indeed reopened by said maestro on 13 December, in front of not a cupboard but probably more politicians than ever set foot inside London's opera houses separately, let alone together. The show was Chabrier's rarely-heard opera bouffe L'Etoile. According to the press release - tragically, I missed the event, being on the wrong side of La Manche - the opera includes "a trio about the use of tickling in foreplay" as well as dealing with the delights of green Chartreuse.

Gardiner and his attendant orchestra and choir are starting a yearly residency at the Opera-Comique and on other occasions will be performing Carmen and Pelleas et Melisande there - both operas which were first seen on that very stage.
Posted by Jessica at 1:54 pm