Had a good trip recently? 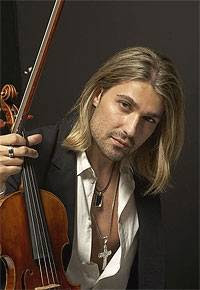 Violinist David Garrett fell down some stairs and smashed his Strad, the 'San Lorenzo'. Ouch.

Perhaps I'm thick or something, but I hadn't come across this guy before. The article in yesterday's Indy linked above says he's one of the country's foremost young performers, previously a child prodigy and now 'the David Beckham of the violin' (hmm, given the photo I'd say that's being unfair - he's actually rather dishier, n'est-ce-pas? And playing the violin is a far sexier thing to do than screwing up the penalty shootout....[fanfanfan]). Of course, it's not impossible that the reason I haven't heard him play is that he does stadiums, and I don't tend to go to them, preferring the up-close-and-personal experience of places like the dear old Wiggy. Sample the video on his site and don't be put off by the woolly hat - in the interview he says he's a disciple of Ida Haendel.

Guess what, his new album 'Virtuoso' is being released in the UK on 24 March. It also turns out that he's at the Barbican tonight. Playing, uh, Valentine's Day Love Classics (ie, the Bruch) with the London Concert Orchestra and conductor Robert Stapleton, promoted by Raymond Gubbay.

I don't recommend breaking your violin, ever, for any reason - but hey, it's great publicity, and the timing couldn't have been handier.

On other occasions, I regret to say I've come across fiddlers (no names) who've had reason to collect on the insurance on their valuable instruments and enjoyed the resultant pleasant change of lifestyle.

Yours truly, being a confirmed fiddle fetishist, is now heading for a cold shower. Happy Valentine's Day to one and all.
Posted by Jessica at 8:33 am