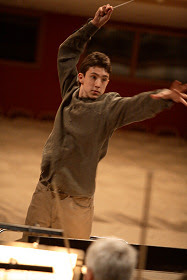 ...if you haven't already. The British prodigy of Russian ancestry and inclination is a very busy lad. Here's my piece about him - and prodigydom - from today's Independent. The online version includes a video clip from his new ballet, Mowgli, which he's just been conducting (yes, conducting at the tender age of 15) in Moscow.

I haven't quite worked out how they could call the performance on Sunday the 'official world premiere' when the thing has already been performed, last summer, but that's publicity for you. Or someone. On the strength of the video, the ballet seems unlikely to set up in competition with Disney or The Lion King, but the rate at which young Alex is churning out music is absolutely amazing. The real test will be what he's doing when he's twice, or three times, his current age.

Parenting, plus good teaching, is what helps any child prodigy to sink or swim; it cannot be otherwise. Almost a hundred years ago, a boy from Vilna (now Vilnius, capital of Lithuania) named Jascha Heifetz made his debut at the age of seven; he grew up to be (arguably) the best violinist of the 20th century. He said: "Child prodigism – if I may coin a word – is a disease which is generally fatal. I was among the few to have the good fortune to survive." Many haven't been so lucky...