Meanwhile, over in the Far East... 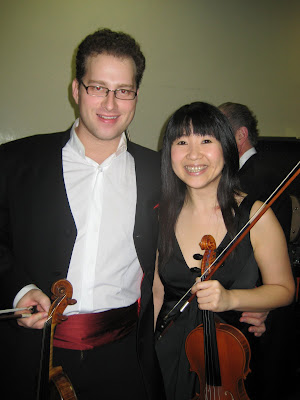 ...the LPO has reached Hong Kong. The Tomcat reports from the harbour front that Christian 'Wow' Tetzlaff has now gone home and Nikolaj 'Phwoar' Znaider has joined them to play the Brahms concerto. I don't know if it's the piece or the sheer energy that these fiddlers impart, but something always seems to happen in the Brahms. Tetzlaff broke a string when playing it in London and trotted off to fit a fresh one; and apparently Znaider's chin rest took a tumble in Hong Kong and there was a kurze pause while repairs were done backstage. After which, he not only came back to finish the concerto but also elected to join the orchestra for the Tchaikovsky Pathetique, sitting next to lucky first fiddler Yang Zhang for the occasion (see pic).

Meanwhile, the LPO lost the football match against the Hong Kong Philharmonic 5-6. Moving on to Taipei tomorrow.

Solti and I are sitting in London gazing at the rain...
Posted by Jessica at 10:28 am