For tree's a jolly good fellow 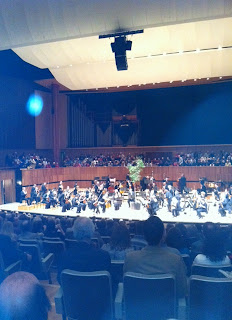 Why doesn't Beethoven's 'Pastoral' Symphony get played more often? Last night it was the climax of the Budapest Festival Orchestra's big Hungarian EU Presidency London concert and proved one of the most heartwarmingly delicious musical experiences you can have with a full orchestra. And instead of a rostrum, a tree - quite a tall one - appeared on stage in front of Ivan Fischer, the leaves high enough not to block his view of the players and vice-versa.

The players themselves popped up in odd places: the first flute, oboe and clarinet in tandem with the front desks of the cellos and violas, the second woodwind dispersed amongst the back desks of the strings. The double basses arranged as a wall along the back of the platform (a placing I always love: it gives a wonderfully solid grounding to the whole sound). The first violin entry in the fifth movement was played by the leader alone; and all the way through a sort of beatific stream of joy seemed to envelop the whole lot of them. No detail escaped Fischer's eye and ear; perfect clarity made the piece shine as if it was chamber music -- yes, I know it's a cliche, but hey, that's how it was -- and every so often you'd catch yourself thinking, "blimey, Beethoven really is the best, innit...".

It was indeed Beethoven at his best, and the Hungarians at theirs. When else, I wondered, have I sat beaming and transported to a better plane all the way through a piece of music like this? It used to happen with the old Takacs Quartet, in the Gabor Takacs-Nagy days. It happens frequently at Andras Schiff's performances, especially chamber music, but I seem to remember it at his St Matthew Passion with the Philharmonia some years ago too. It was definitely the case listening to Gabor Takacs-Nagy conducting the Elgar Introduction and Allegro in Verbier. Yes, it has something to do with the Hungarian musical tradition: all-giving, all-consuming passion, concentration, pride, rigour and fun, rolled up into one fabulous musical palacsinta...

Haydn's 'Oxford' Symphony -- written not all that long before the Beethoven -- was the opener, again filled with attention to detail, yet inhabiting rather a different world, one very much of 18th-century grace and elegance. Then came Birthday Boy Ferenc, in the persona of Stephen Hough: perhaps the perfect Lisztian, he stormed, dreamed and philosophised the First Piano Concerto into something much more worthwhile than it often seems. The terrific Anglo-Hungarian mix of Hough and Fischer took the work seriously and met it on its own terms, to dramatically colourful effect. Hough gave us the shortest, quietest Liszt encore you could imagine, and at the end the BFO added a Brahms Hungarian Dance (the one that segues with utter glee into the last section of 'Hejre Kati') and the Strauss Peasant Polka, in which the Hungarian-dancing orchestra started singing too. Result: audience on feet, yelling. Everyone happy. Time to party. 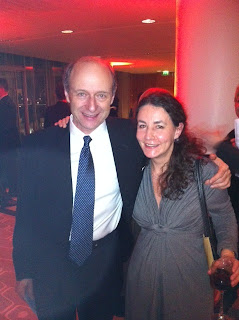 Upstairs, the wine flowed and the mini cherry strudels virtually evaporated the minute they appeared. The Hungarian chargee d'affaires explained that Hungary is basing its sixth-month presidency on the notion of Strong Europe; jokes were made about the placing of the storm before one can emerge into the sunny uplands of the fifth movement; many pan-European, bright-eyed, bushy-tailed Liszt fans were making friends and we all sang happy birthday to Ed Vaizey's mother, led by the evening's maestro himself (pictured left, with your blogger).

There will be a terrific Hungarian Liszt festival at Kings Place next week, from 26th to 29th Jan, featuring some amazing artists including violinist Barnabas Kelemen, pianist Denes Varjon and a folk group... Check the programme here and do come along. But more on this very soon...

As for the Hungaryfurore... The latest development is that Andras Schiff has expressed the view that he is now completely persona-non-grata in his native land and thinks he may never play there again. But meanwhile, Hungarian friends here with their fingers on the pulse of the media law issue have told me that the English translation of the legal pages in question is about to be presented to the EU powers-that-be and that if its contents do not meet with EU approval it will be changed accordingly. It may be worth remembering, at this juncture, that that is exactly what the EU is really for. Time to add Beethoven 9 to Beethoven 6? Complete, I hope, with tree.
Posted by Jessica at 4:49 pm