Over the Xmas hols, while everyone was away, news popped into my in-box about the launch on New Year's Eve of the first full-scale Palestinian symphony orchestra to hit the boards since the band that later became the Israel Philharmonic. I only hope the concerts did take place as planned. Having not heard anything to the contrary, I thought I'd run the following... The pictures were taken when we visited the West Bank last April.

Only an immensely ambitious ensemble would begin its inaugural concert with music by the late György Ligeti. But the Palestine National Orchestra has nothing to lose: it is already perhaps the most audacious new orchestra in the world.
Holding its first public concert on New Year’s Eve in Ramallah, and, remarkably, following this with performances in Jerusalem and Haifa on consecutive days, the PNO is the first Palestinian symphony orchestra of professional musicians to be launched since the orchestra that later became the Israel Philharmonic back in 1948. Its opening programmes were to feature, alongside Ligeti, Mozart and Beethoven, music by two Palestinian composers, Sharbel Dalal and Salvador Arnita, the latter a former organist from Jerusalem’s Church of the Holy Sepulchre. 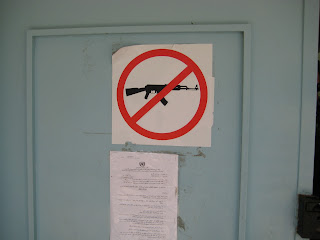 The PNO is the natural consequence of a groundswell of interest in western classical music that has developed in the Palestinian Territories over the past 15 to 20 years. It is the initiative of the Edward Said National Conservatory of Music which, since being founded in 1993, has grown into a network of music schools that teach both western and Middle Eastern musical instruments and styles, with centres in Ramallah, Nablus, Bethlehem and Jerusalem, and more in the planning stages.
To say that music has come to represent the life blood of the Palestinians might be an exaggeration, but not by much. When I went to the West Bank a few months ago with my husband, who brought his violin, we visited the ESNCM in Bethlehem -- a little town that bears scant resemblance to the Christmas carol, being neither still nor dreamless. There Jalil Elias, the Bethlehem ESNCM director, described the organisation’s mission in no uncertain terms.
“We teach music to give the children here a new mentality and a new life and we teach them to let them breathe,” Elias declares. “It’s our philosophy, it’s how we can let the Palestinian people, through music, find peace for themselves. We believe that music is one voice for everyone, all over the world. It doesn’t matter if we are Japanese, French, English, Italian or whatever: a soul is a soul. Politics is full of lies, but when you play music like Mozart or Beethoven, you play from your depths and from your feelings and from your fingers and your touch and your heart – it’s truth, not lies.”
The ESNCM offers music tuition to thousands of children, 75 per cent of them on full scholarship, and via an outreach programme to those in impoverished villages and refugee camps. Its flagship is the Palestine Youth Orchestra, founded in 2004, which is made up of young musicians aged from 12 to 26. And Bethlehem’s conservatory is now building a state-of-the-art new home with a concert hall, a music library, 17 classrooms and plentiful studios, due to open in 2011. 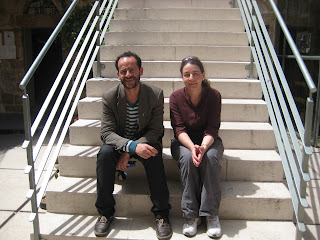 In Ramallah I visited the independent music school Al Kamandjati (in Arabic ‘The violinist’), run by the violist Ramzi Aburedwan. Born and raised in a refugee camp, Aburedwan first held a musical instrument in his hands when he was 14 and attended a children’s workshop held by a visiting musician.
“I had always dreamed about playing music but I never expected to touch an instrument,” Aburedwan says. “It was always a far-away dream because of the lack of opportunity, and I was from a poor family that could not afford music lessons.” He went on to win scholarships to study in the US and France, but never lost sight of his goal to return to his homeland and bring music education to children there. Al Kamandjati opened in 2005 with a group of visiting teachers, a motley collection of donated instruments and 20 students. Now, says Aburedwan, the latter number around 500.
The Barenboim-Said Foundation (distinct from the ESNCM, which is also named in honour of the Palestinian writer Edward Said) is yet another a powerful force in music education, centering on Ramallah where it has established an international team of teachers and seeks to make the study of western classical music part of everyday life. Barenboim’s West-Eastern Divan Orchestra, though, does not attract universal praise: to some it represents a false image when seen alongside the realities on the ground. “It’s another world,” says Aburedwan. “Playing in the best halls in the world has nothing to do with what’s going on here.” 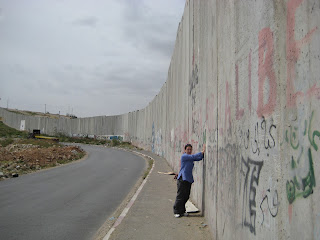 Undeniably, given the realities of daily life in the Palestinian Territories, the PNO is launching against all odds. Ferocious logistics are involved in putting on any concert in this region, especially if it requires the transport of a large number of people of assorted backgrounds, residences and permits; journeys through the Palestinian territories are liable to be interrupted for unpredictable lengths of time by armed checkpoints, while the Palestinian populace is subjected to a labyrinthine system of regulations affecting, among other things, entry permissions, number plates, segregated roads (some are reserved for Israelis and settlers only) and the Separation Wall.
But nothing could make clearer the pivotal role of music in maintaining the Palestinian sense of dignity and identity than the establishment of this orchestra. Its opening series is an international affair under the baton of the Swiss conductor Baldur Brönnimann, with the Palestinian-Japanese soprano Mariam Tamari as soloist. The orchestral players include both Palestinian musicians and classical performers of many backgrounds who have visited the Palestinian territories to teach. If it can succeed, its message of hope for the year ahead should speak out loud and clear.
(Were you there? Have you heard about how the concerts went? If so, please write in and tell us.)

UPDATE: Violinist Simon Hewitt Jones writes in to say that actually another symphony orchestra launched in Ramallah just a couple of weeks earlier! This is the Ramallah Orchestra, founded by Ramzi Aburedwan himself, with Al Kamandjati. Simon joined them at their first concert to perform Monti's Czardas. You gotta love the way that the spirit of artistic competition is flourishing so strongly over there. See article here.