London 2012: A few things we can learn from the Olympic Games... 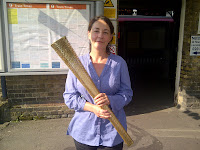 This was the fortnight in which Britain learned the value of clibing nachas. One of those all-but-untranslatable Yiddish phrases, its meaning is somewhere in between "taking pleasure in your family's achievements" and "basking in reflected glory". When you feel you're part of the success of something, even when it's someone else's success. (see left.)

I mean, it was amazing, wasn't it? After all the buss and fother, after all the warnings about impossible transport and raised prices and overcrowding and 'get ahead of the Games' (to which I flippin'well listened, and went on holiday, and missed half the fun), after the security debacle and the certainty that no way could the UK ever be organised enough to put on the greatest show on earth...it did. And pulled in in third place on the medals chart. How did that happen? World-class achievement in sport has much in common with other world-class achievements, so what can we learn from it?

2. Success takes investment. How did the UK get from one paltry medal in Atlanta 16 years ago to third place in the world? By investing in training. About £250m - mostly from the National Lottery - was thrown at the training of our athletes. The "treat 'em mean and keep 'em keen" attitude that's usually levelled at the arts in the UK didn't apply - because it is, of course, bollocks. True, money without good management solves little, but without financial investment you're nowhere. Now can we please have a reversal of the ongoing disinvestment in our wider education and culture? Otherwise we'll be back at the bottom in everything else.

3. Success takes dedication and sacrifice from the artists/athletes involved, but also from their families. Much was made by the BBC TV presenters of how the athletes' families have given their all to support their youngsters; so, too, the fact that the families were overjoyed to see their loved ones in Olympic action (ie, they were clibing nachas). Now, if a child is gifted at music and his/her parents put immense energy into helping him/her along and then take pleasure in the results, someone inevitably accuses them of being "pushy" or stopping their son/daughter from having a "normal childhood". Why the distinction? Sport and music alike require an early start, in every sense. It may be possible without familial support, but it's a heck of a lot harder. For instance, if your dad won't get up at 5am to drive you to the ice-rink/swimming pool/practice room for a few hours of training before school, but others' dads do, the others will be ahead of you and you won't make the grade.

4. Success needs moral support. The importance of this has been underestimated. Who could have had better moral support than the Team GB athletes this past fortnight? It's in the air we've breathed here in London: everyone has been rooting for them, cheering them on, and when people believe in you so much it's like a big fluffy trampoline that helps you to bounce higher, take off and fly.

Our arts practitioners don't usually meet that kind of moral support. In music particularly, we have to fight and fight and fight and FIGHT just for the teeniest glimmer of recognition that what we do does not happen by magic, but takes the same kind of graft that an athlete puts in. Without moral support from families, schools, colleges, arts managements and indeed the country, performers - who are only human - have to throw more energy into surviving emotionally without it, energy that could have been better directed at the task itself. It's difficult already, and lack of moral support makes it more difficult. That's why they need us all to clibe nachas.

5. Elitism shmelitism. There's nothing more elite than the training required for a gifted individual to become the best. But without an "elite" training - high quality, full-on, time-consuming and, yes, probably quite expensive - people do not generally rise to become the best. Yet we're all interdependent. Without the people who prove they are the best at what they do, the rest of us become demoralised, because lack of world-class success reflects on our country and our society as a whole. We need the gifted and successful to pull us all up to a better level. That's what clibing nachas does for the ones doing the clibing.

6. One person's success brightens the lives of everyone who partakes in it. There've been a great many tears shed this fortnight as Jess Ennis and her team-mates showed the stuff they're made of. I mean, if I can be touched by all this - I'm one of many who was put off sports by school PE, and my enthusiasm as viewer rarely stretches further than Wimbledon - then anybody can. And just think of the joy, emotion and insight that music brings us, via those who excel at it. That's what it's for, for goodness' sake. To stir us to great emotions, to catapult us above the everyday. To make the world feel like a better place. See the point above about us all being interdependent.

7. You reap what you sow. The more you put in, the more you get out. But you do have to put in enough to begin with. Billions went into the London 2012 Olympic Games. What came out of it has been priceless.

8. Musical Olympics don't really exist - but where they sort of do, Team GB needs to get on board. If there's an equivalent, it's still the big competitions - eg, the Tchaikovsky Competition in Moscow. These are not an end in themselves for their entrants, but a beginning, a launching pad - which, in a way, makes them all the more vital. The latest Tchaikovsky Competition, in which ace pianist Daniil Trifonov shot to international stardom, attracted not a single British entrant, let alone a medallist. British musicians do not often win international competitions and we have to face the fact that that is probably because other countries take musical training more seriously, invest more money in it and do so much earlier in youngsters' lives. It's easy to say "but we have some great teachers", etc, but the facts demonstrated in the international context tell the true story. Stripping state funding from our music colleges - along with all the other arts and humanities higher education courses in England - will make the situation worse. The lesson of the Olympics is not just that we should invest more in training for sport because all of a sudden we're good at it. It's that we should invest in education and training for many, many other things so we can become equally good at those.

9. From now on, we need to appreciate real ability instead of quick-fix, appearance-driven dross. In sport, this is relatively easy because you can see who's crossed the finish line first. In music it's more difficult, because assessment is about taste, personal judgment and, unfortunately, being well informed enough to know how to assess what you're hearing. Hopefully, though, the Olympics have shown up the vacuity of manufactured "stars" and the notion that you can be famous without being able to do anything. With any luck, this might produce a shift in national awareness of how we're too often fooled by rubbish. Despite all the hype about sponsors, branding and exclusivity, nobody can force us to eat hamburgers, swallow fizzy drinks, buy diamonds or download a particular recording. If we're in charge of our own brains, we don't have to be taken in. Interestingly, exercise can help this. Be inspired: go running. It helps you think.

10. Apart from a little Elgar at the start of both, and a surprise appearance by Daniel Barenboim, carrying a corner of the Olympic flag, there wasn't a lot of classical music in the London 2012 opening and closing ceremonies. And a lot of the pop singers were out of tune. What we learned, though, is that the real classics of British music in the 20th century are mostly by the Beatles. See point 8.

11. So who's on Music Team GB? Here's one of our truest golds. You can hear him at the Prom tomorrow, playing Saint-Saens's Piano Concerto No.2. This interview is a promotional thing for his new CD of that concerto, Ravel's G major and Gershwin's Rhapsody in Blue. Go, Benjamin, go!