Salzburg: I am a Festspielhave 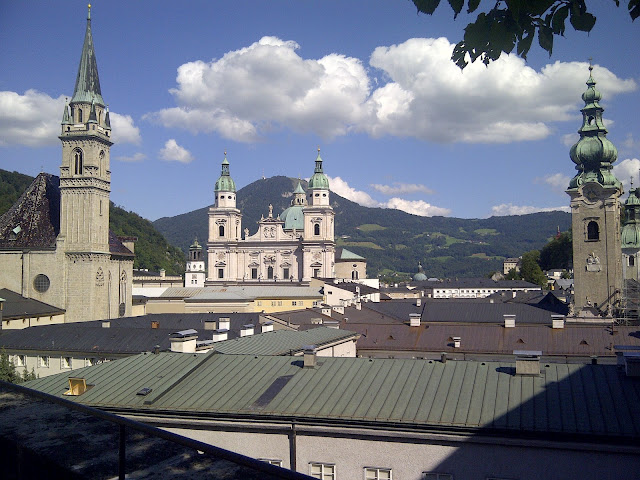 I'm just back from the Salzburg Festival, where I heard more amazing singers within 72 hours than you'd believe possible. Three very different operas from three different centuries, each focused on war, actual or between the sexes - usually both. My review-proper will be in Opera Now magazine. In the meantime, here's a little taste of the trip. 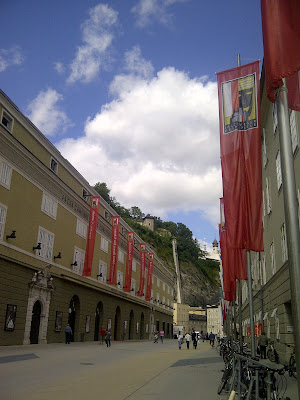 Bernd Alois Zimmermann's Die Soldaten proved perhaps opera's most devastating experience: an all-out tour-de-force, assaulting senses and emotions alike. Good to see TV cameras there last Sunday, as this production is a great achievement that requires preservation on film; nothing, though, can really capture the impact of experiencing it live, from a seat almost beneath the largest of several outsize tam-tams. This opera musters every last shred of force available to an orchestra, a cast, a lead soprano (the magnificent Laura Aikin), a conductor (heroic Ingo Metzmacher) and the human ear itself to get across its message: the horrors that these military men foist upon the hapless Marie, and the failure of a variety of parents to prevent it. The composer took his own life in 1970. Books on Zimmermann are in short supply, and there seems to be nothing in English, but Alex Ross provides some valuable insights here.

Other question-marks hang over Carmen. Updated to Franco's Spain, it starred Magdalena Kozena as a red-haired firebrand partnered first of all by her husband, Sir Simon Rattle, in the pit, and secondly by Jonas Kaufmann, whose Don Jose was a puzzling matter possibly determined by directorial decisions rather than tenorial ones.

Finally, Handel's Giulio Cesare, with Andreas Scholl as Julius, Cecilia Bartoli as Cleopatra, Anne Sofie von Otter Cornelia and Philippe Jaroussky Sesto. These people know how to Handel you. A perturbing moment towards the end when one reckoned that the Salzburg Festival and all those great singers should know better than to put drinks on a piano. But otherwise...these guys and GFH together moved me to tears several times - Cornelia's first aria, the duet for her and Sesto, Cleo's 'Piangerai' - and left me at the end of five hours almost ready to beg for more. Gulp. 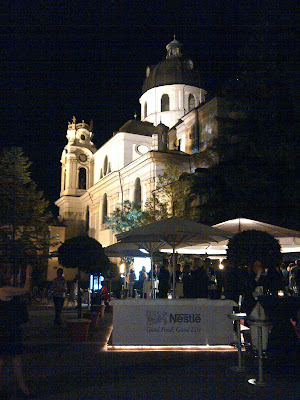 Inside the venues: phenomenal music-making, imaginative productions (some more than others) and world-class performances. The setting: mountain scenery, evening dresses, outsize jewellery, facelifts, sponsors' parties, pre-show drinkies choice of Moet on one side of the road or Taittinger on the other.

Pretentious though it may look, it's not all snob value. On my second and third evenings my neighbours were enthusiasts who were there on their own purely for love of music and interest in theatre. One was a retired lady from west of Paris, the other a mechanic from the Salzkammergut. And there is kindness aboard, too. Exiting Die Soldaten, I was brolliless in a downpour that put Salzburg's famous Schnurlregen to shame. A Californian lady festival-goer spotted me and offered to share her umbrella across the bridge. That's never happened en route to Waterloo Station. (Below: the view of the Castle from the interval crowd outside the Felsenreitschule. The dog is a Festspielhavenot.) 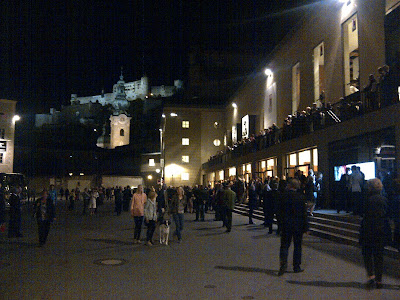 The atmosphere has changed a little since my last visit, some 20 years ago. Back then, almost every shop window bore a poster showing one or more of the musical stars visiting the town. The buses carried advertisements proudly welcoming Maurizio Pollini and Krystian Zimerman to Salzburg. The record shops were full to busting. Today? The sides of the buses plug designer outlets and free parking. I only spotted one record shop in town, and it specialised in world music. Zimerman's recital had been cancelled due to illness (Leif Ove Andsnes replaced him). Sponsor logos are plastered everywhere - gone are the graceful days of discretion in philanthropy (though it's nice of Nestle to provide Kit-Kats for the journalists in the media centre). And a gaping division is all too evident between the down-at-heel atmosphere on the outskirts of town and around the station, and the dripping-with-gold-and-designer-shops historic centre. The one thing that hasn't changed is the number of tourists and the amount of Mozartkugeln on sale.

A more welcome addition is a big screen in the Domplatz that relayed Die Soldaten live on Sunday, and on other evenings showed film of operas from festivals gone by. And I may have missed a trick by not taking the Sound of Music tour bus - apparently you all sing 'Doe, a Deer' and there's a quiz to win a packet of Edelweiss seeds. But the way time panned out, it was a choice of that or a jog along the river, and the latter won. Had to burn off some of that chocolate.

Check the November issue of Opera Now for my detailed review of the three performances.