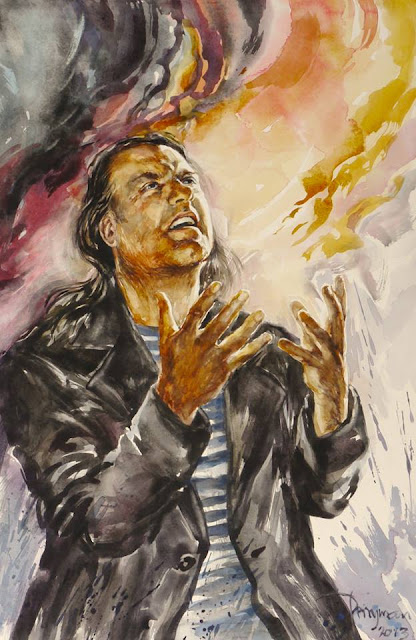 This is Norman Perryman's brand-new watercolour portrait of Bryn Terfel as The Flying Dutchman. It is due to join the substantial gallery of this unique music-focused artist's work at Symphony Hall in his native Birmingham, where it will be unveiled on 7 June.

Norman writes on his blog:

"This painting is inspired by fragments of the Dutchman’s role that Bryn sang to me in our portrait “sitting” (actually standing) in a Milan apartment. He chose parts of the famous monologue “Die Frist ist um” (“The term is up…once more”) when the Dutch captain is pleading with the angel in heaven and wrestling with his fate. The mariner is condemned to roam the seas, allowed to go ashore after every seven years. But if he can find someone who will be faithful to him unto death, he will be released from his curse. Since then, I’ve been playing this opera continuously in my studio (and every other recording Bryn has made!). My paintings are always driven by the music and I delved deep into the intense emotions of the plot, from depression to disappointment, ecstasy and tragedy. It gets quite exhausting!

"Rejecting idiosyncratic images from various opera productions, I put together my own impressions of Bryn as the Dutchman, with a seaman’s hands, tanned complexion, long hair and leather long-coat and with a somewhat ambiguous expression, somewhere between desperation and a glimpse of hope. The background and brushwork suggest not only the stormy atmosphere, but the emotional drama of the surging music. Bryn’s phenomenally expressive voice and his dramatic stage presence made the creation of this painting a very intense experience." ...


Read the rest of his post about the painting here.
Posted by Jessica at 10:02 am