A big "Benvenuto" to Cellini! 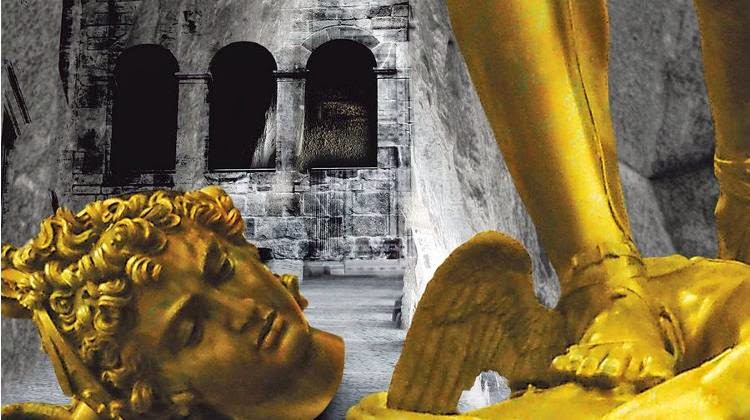 It's the deadline from hell. If Benvenuto Cellini hasn't cast his golden Perseus statue by morning, the Pope will have him hanged. But it has to be now that his rival in love arrives, demanding that he fight a duel this minute. In comes his girlfriend, saying she's run away from home and wants to live with him. Her father runs in after her to say no, no, she has to marry the other guy. Then the foundry workers go on strike because they haven't been paid. The project seems doomed. The flames are blazing, the noose is raised and Cellini is running out of time.

What does he do? He sings a big aria about how he'd like to move to the mountains and be a drover instead.

Any creative artist in the audience is won by then - 3/4 of the way through - because this character has such a ring of truth to him. But then, they're probably won anyway. This rip-roaring, totally bonkers, "semi-serious" opera (yes, that is a genre) in Terry Giliam's brand-new staging at ENO is a knockout from overture to final curtain.

Admittedly it is not the greatest opera ever written - sometimes Berlioz nearly drowns in the well of his own ambition (something that meanwhile happens on stage to our slightly stuffy baddy, Fierabosco). Still, it contains several top-notch arias, particularly in the second half, and some stonking choruses, including one that's much of what we usually know as the Roman Carnival Overture, portraying, well, a Roman carnival - and sung at a tremendous lick while stilt walkers, acrobats, a trapeze artist in a hoop and circus fun are going at full tilt all around.

"Applaud and laud all art and artisans!" sings the chorus, raising the roof - and we rather wanted to join in, because here at last is a work of art that praises the creation of works of art, throws its whole weight behind the artist - however dissolute - and declares with enormous conviction and passion that art is a matter of life and death. Here who dares wins. For Cellini, read Berlioz. And for Berlioz, add Gilliam, who seems to have found the perfect piece to suit his own creative personality. Production and music match to a tee: huge-hearted, overwhelmingly warm and generous, ridiculously OTT and full of thrills.

It's less tricksy than Gilliam's take on The Damnation of Faust, and unlike that production he does stick to telling the story. Nor is it excessively Pythonian, despite the part where everyone is dressed up as monks, trying to abduct the soprano (the reference, with mirrors further confusing matters, is more Marx Brothers than Monty Python). Theatricality is everything: giant carnival figures are paraded through the audience, glittery confetti bursts from the ceiling and twirls down upon us, and inspired coups include the set's inspiration from Piranesi, the final unveiling of the great statue, and a rather creative approach to visualising a tuba cadenza.

The words, in a translation by Charles Hart, award-winning lyricist of The Phantom of the Opera, are very wordy, sometimes cumbersomely so, rich in alliteration and certainly not designed to make life easy for the chorus. They are, though, extraordinarily clever at times and their flair matches Berlioz's and Gilliam's in spirit. One magnificent twist finds "Applaud and laud all art and artisans" transformed into "Applaud and laud all tarts and courtesans".

Tenor Michael Spyres is a strong, beefy, bold Cellini in every sense - it's a huge role with some stratospheric moments to which he gives his all. Corinne Winters is extrovert, sassy and in terrific voice as his beloved Teresa; and Sir Willard White as the Pope is as inspired a piece of casting as one's ever seen, besides the glory of his voice. Highlights in the supporting cast include Paula Murrihy as Ascanio, the business manager, who has the second-best aria in the whole piece, and the duo of Nicky Spence and David Soar as the foremen. Applaud and laud Ed Gardner and the orchestra, perhaps most of all, for holding this sprawling virtuoso feast together, turning it into a musical kite and letting it fly.

As for Gilliam and his creative team, they got a standing ovation, turning the convention of 'director's opera' on its head (the creatives' bow is usually when the booing kicks in). I don't know if the former Python is ushering in a new era of director's opera with a very different meaning - ambitious, theatrical stagings that are true to the spirit of the piece and that everybody is itching to see - or if he's a one-off. I suspect the latter. But he really can cut the operatic mustard, so what's next for him? How about a Ring cycle? Go on, Tez. You know you want to.

We don't do star ratings out of five here on JDCMB, but if we did, this would be a six. (Update: my colleague at the Indy doesn't agree and gives it a two. It's five from the Telegraph and four from the Guardian and The Arts Desk.)

If you can't get to a show, go and see the live relay in the cinema on 17 June.