It's the big 150th anniversary today, so here is a little something to celebrate, with pics from my visit to Garmisch in 2012. First, the incomparable Fritz Wunderlich in one of the composer's most beautiful and ardently summery songs, 'Heimliche Aufforderung'. And you can watch the whole of Der Rosenkavalier from Glyndebourne free online here, starring Kate Royal, Teodora Gheorghiu and, of course, the fabulous Tara Erraught, whose star shines bright. 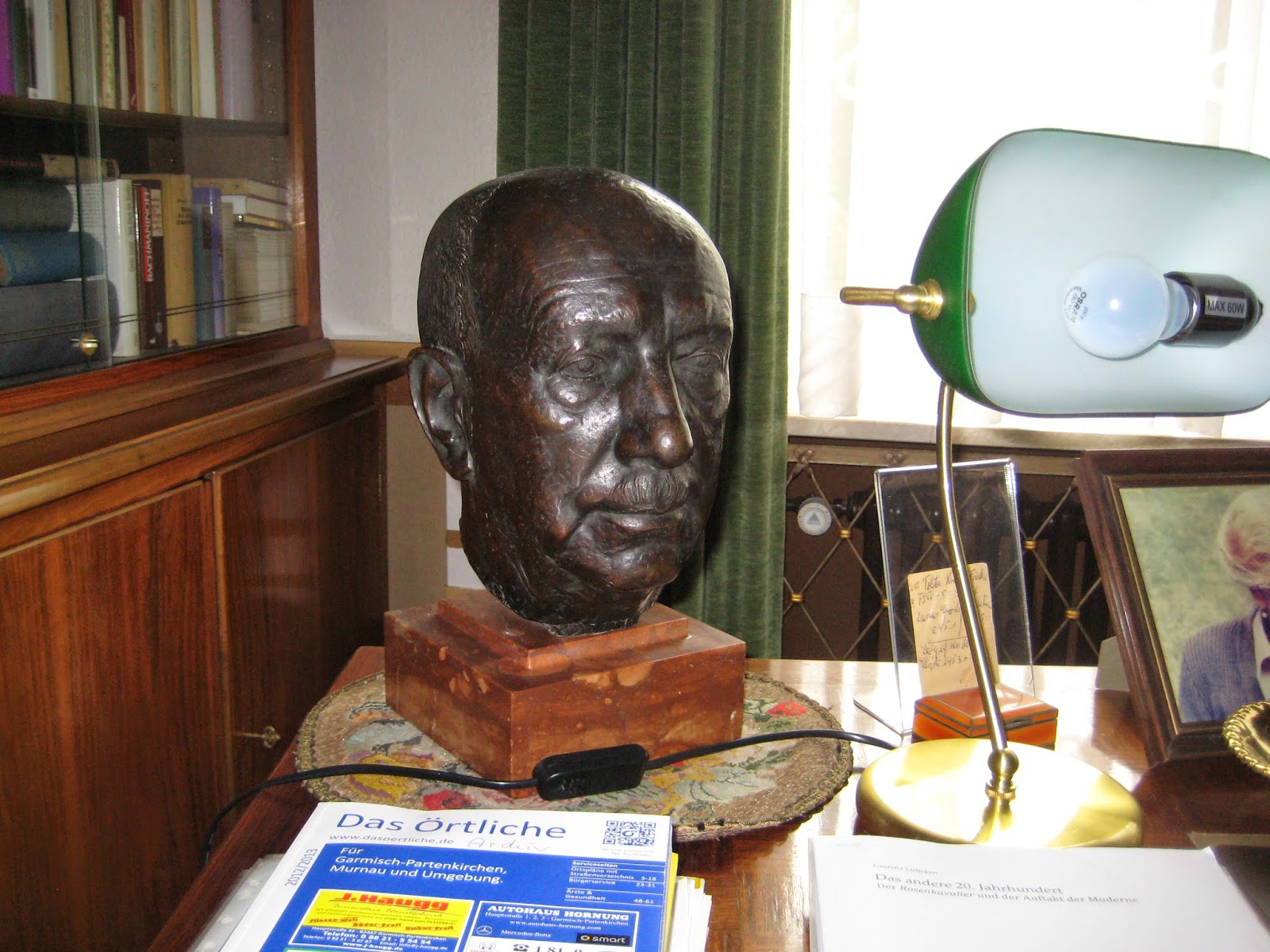 It is often said that behind every great man there is a great woman; but not every great composer can claim to have achieved a long and happy – if somewhat tempestuous – marriage to his muse. The soprano Pauline de Ahna was the powerful presence behind Richard Strauss: his wife, his inspiration and a diva in every sense. Over his many decades he drew on plenty of different spurs to musical action, but none more consistently or more powerfully than the soprano voice.

Strauss’s operas remain arguably his finest achievements and the Royal Opera House has already marked the 150th anniversary of his birth with a new production of Die Frau ohne Schatten (1918), the most complex, symbolic and magical of his collaborations with the playwright Hugo von Hofmannsthal. Despite its baffling fairytale premise, it deals at heart with matters that are human and domestic: the longing for a family.

Strauss was born into the centre of the German operatic world; his father, Franz Joseph Strauss, was the principal horn player at the Munich Court Opera. Loathing the music of Bavaria’s local megastar, Richard Wagner, Franz Strauss was the only member of the orchestra who did not stand up in respect when the composer’s death was announced to them. His son took a different view: “I remember clearly how, at the age of 17 I feverishly devoured the score of Tristan [und Isolde] and fell into a rapturous ecstasy,” he recalled. 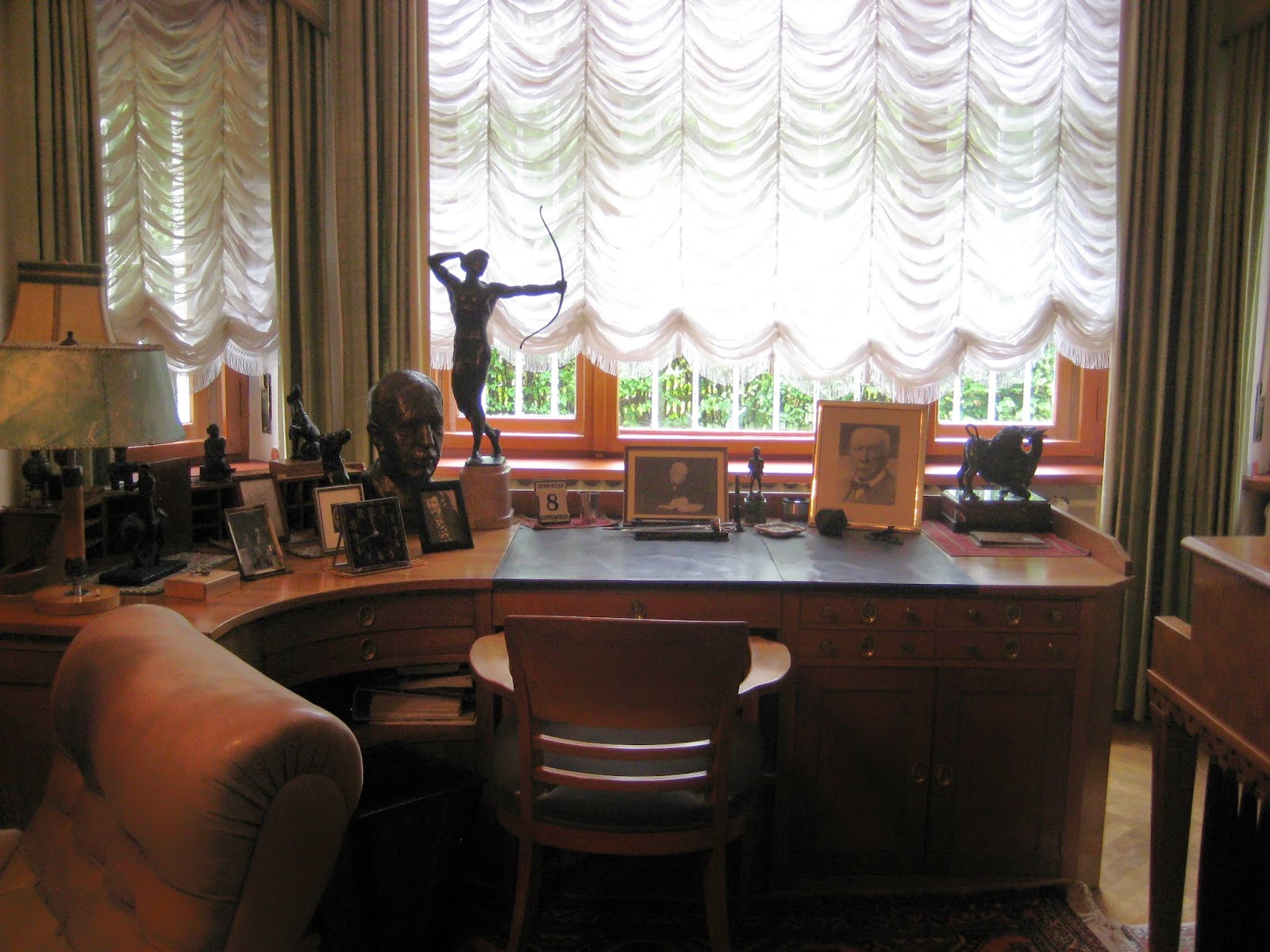 In his teens he composed prolifically; and Hans von Bülow (the first husband of Cosima Liszt, who then married Wagner) helped him to secure his first conducting post in Meiningen when he was only 21. Later he held vital posts as conductor in Munich, Weimar and Vienna; film exists of him on the podium in advanced age at the Salzburg Festival.

He announced his engagement to Pauline de Ahna shortly after the soprano – starring in his first (and not very successful) opera, Guntram – had astonished the musicians in rehearsal by throwing a piano score at him. She was, he later wrote, “very complex, very feminine, a little perverse, a little coquettish, never like herself, at every minute different from how she had been a moment before". They settled in 1908 on the outskirts of Garmisch-Partenkirchen, where Strauss built a substantial jugendstil villa with the proceeds of Salome’s success; his study housed an Art Deco desk with a specially commissioned matching piano (pictured above). 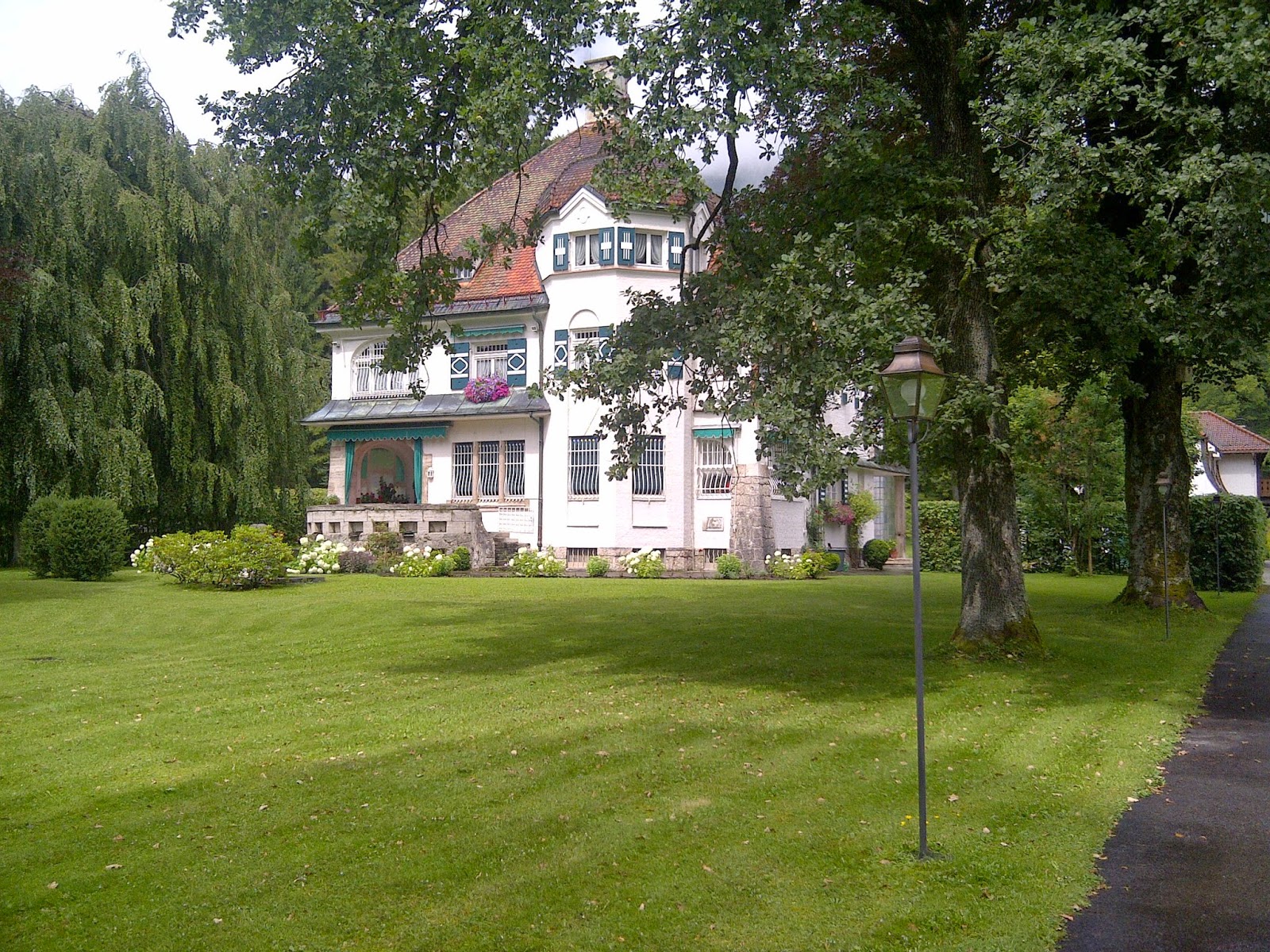 “My wife is often a little harsh,” he is reported to have said, “but you know, I need that.” Not everybody did. Indeed, her cantankerous personality attracted note from many quarters. In the late 1920s my grandmother-in-law was dining in a restaurant at Kochelsee, near Garmisch-Partenkirchen, when she spotted at a nearby table her father’s occasional skat (card game) companion Richard Strauss and his wife. The waiter apologized to Frau Strauss: they were out of the fish she wanted. He offered her, instead, a nice fresh Saibling. “I don’t want that scheisse [shitty] fish!” the great lady expostulated, according to grandma-in-law.

“Strauss would never have become a great man without Pauline,” insisted the composer’s friend Manfred Mautner-Markhof. The pair’s volatile relationship left its mark directly upon Strauss’s music, notably in both the Symphonia Domestica and the tone poem Ein Heldenleben – in the latter she is personified by a solo violin. But above all, her presence is felt in the power and sensuality with which he wrote for the female voice, whether in the frenzied finale scene of Salome, the celebrated trio towards the end of Der Rosenkavalier, or the ecstatic and soaring lines of his solo songs, including his wedding present to Pauline, Cäcilie. 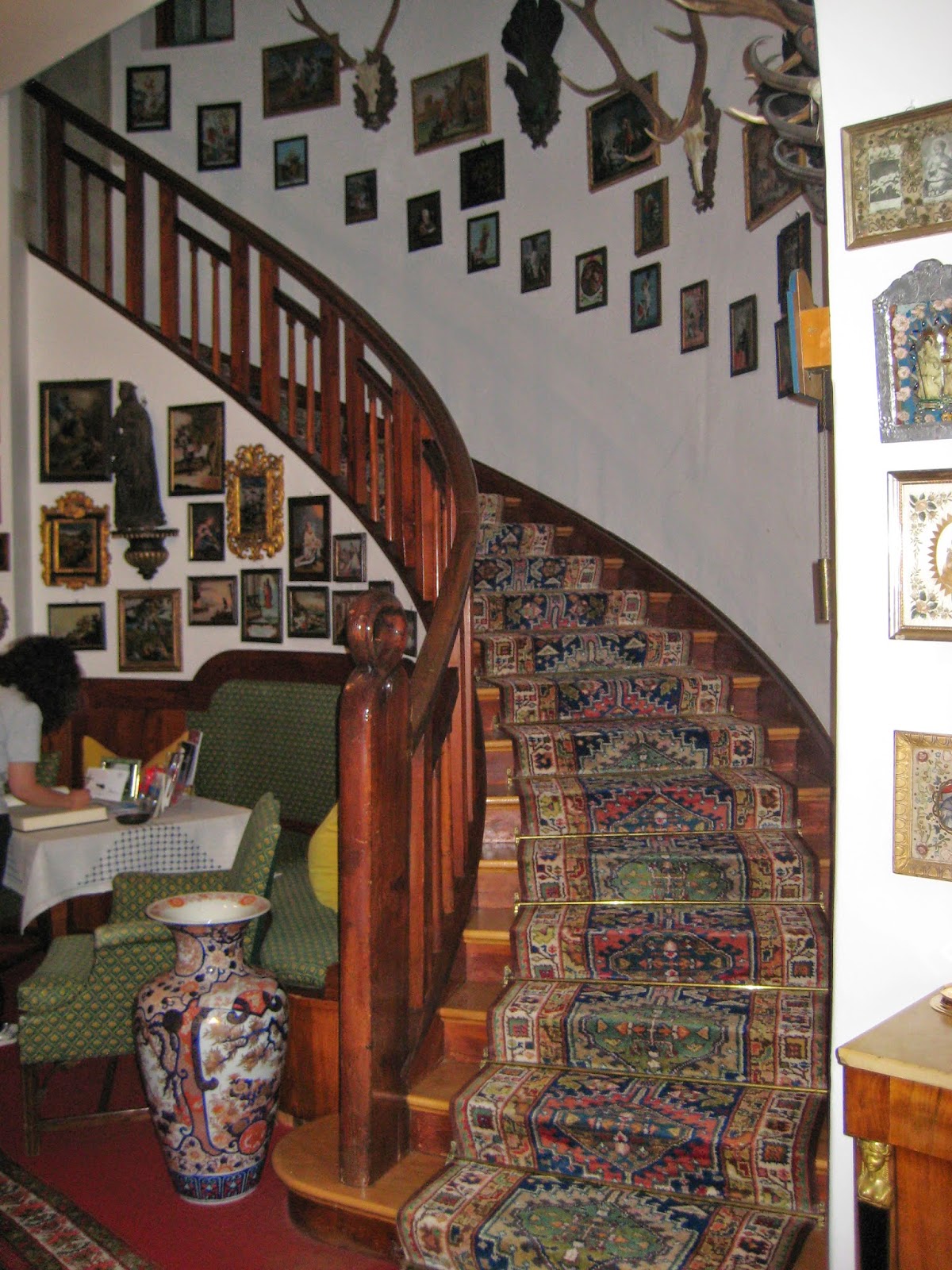 It was another area of Strauss’s life that housed his most difficult moments. In 1933 – by which time he was nearly 70 – he was made head of the Nazi administration’s Reichsmusikkammer, a state music institute that aimed to promote “good German music” by Aryans. Declaring that he had been appointed without being consulted first, Strauss said – perhaps naively – that he hoped he could “do good and prevent greater misfortune”. He was forced to resign, though, in 1935 when a letter he had written to Stefan Zweig, the Jewish librettist of his opera Die Schweigsame Frau, was intercepted by the Gestapo and found to contain cynical words about the regime.

His attitude towards the Nazis in the ensuing years contained loathing, but also bursts of sociability – not idealistic as much as self-interestedly pragmatic. Ultimately both Nazis and anti-Nazis judged Strauss “a total bystander” or, as Goebbels, put it, “unpolitical, like a child”. Nobody could escape the fact that he was by then the greatest living German composer – yet also an intractable soul, uninvolved and caring only for his family and his work.

Nevertheless, he expected too much of the Third Reich. Strauss’s daughter-in-law was Jewish; her mother was imprisoned in the concentration camp at Terezin. The composer drove to its gates believing he could rescue her by pulling rank; but the guards would have none of it. Eventually he was publicly humiliated by Goebbels for having made disparaging remarks about Lehár, Hitler’s favourite composer of operetta. “The art of tomorrow is different from the art of yesterday,” Goebbels said to him. “You, Herr Strauss, are yesterday!” 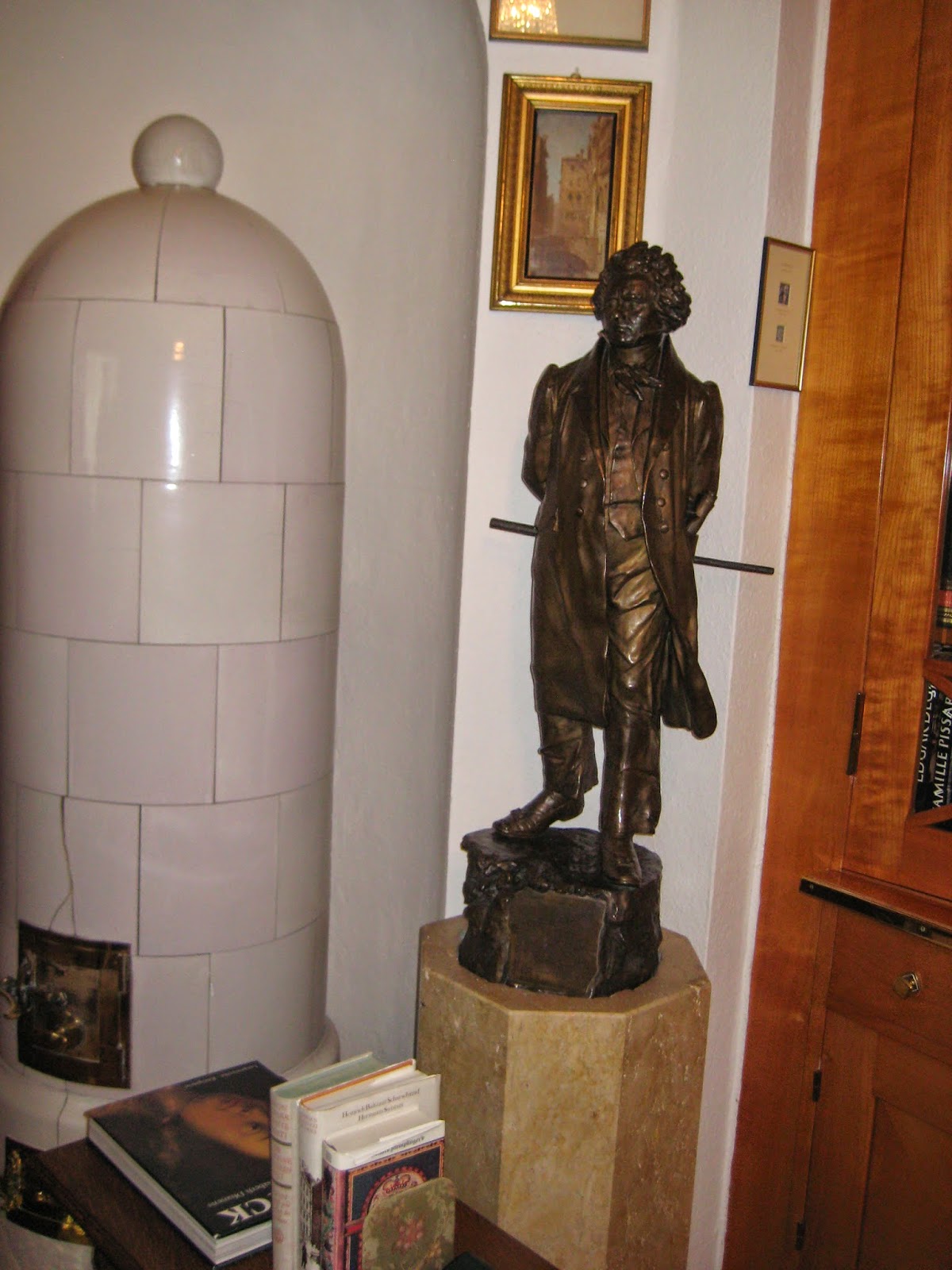 Strauss’s music, though, had the last word. In 1948, the year before he died, he completed his Four Last Songs for soprano and orchestra. Here the musical language may belong to an earlier age, but its beauty and universality transcend any such concerns. The last song, “Im Abendrot” (At Sunset) describes an elderly couple spending the quiet evening of their lives together. “Is this perhaps death?” asks the soprano, while two flutes evoke a pair of larks rising towards the heavens. It was his last and perhaps most perfect offering to his beloved muse, the soprano voice. On 8 September 1949 he died, aged 85. Pauline outlived him by just eight months.

Pictured right: a statue of Beethoven that stands in Strauss's house. The story goes that when the Americans arrived in the area at the end of the war and turned up at the villa to investigate, one of them asked Strauss who this was. The somewhat unimpressed composer told them it was the Gauleiter of Garmisch.

(This is an adjusted version of my article that appeared in The Independent in January.)