I had a chat with director David Alden about The Queen of Spades at ENO for The Independent (opening night was yesterday). He revealed that Tchaikovsky was no stranger himself to the sort of stalking that Lisa experiences from Hermann... 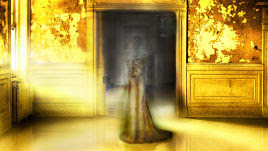 Few operas can boast a libretto based on a literary masterpiece that is also a psychological thriller. Tchaikovsky’s The Queen of Spades, after Alexander Pushkin’s short story, is the exception – and its gripping tale, focusing on a crazed anti-hero, presents a peach of a challenge for any opera company. English National Opera is about to stage its first production of the work in some 20 years with the American director David Alden at its helm. After his enduring success for ENO with Britten’s Peter Grimes, expectations run high.

The opera’s protagonist, Hermann, believes that if he can discover the secret of the “three cards” it will transform his life. He courts the unfortunate Lisa to gain access to her grandmother, an elderly Countess who guards the crucial gambling formula; tragedy ensues as his obsession spirals out of control.

“It’s not easy to stage,” Alden confirms. “It’s a very big piece, it’s quite a monstrous, gigantic panorama, and to keep refocusing it requires a difficult balance between its elements.”

Despite its scale and depth, The Queen of Spades is often overshadowed by Tchaikovsky’s operatic masterpiece, Eugene Onegin, also based on Pushkin, which preceded it by a decade. No less compelling, though, are the driven, haunted qualities of his music for Hermann and Lisa and the care and delight with which he created Mozartian pastiche to evoke the Countess’s memories of the court of Catherine the Great.

The score’s special intensity, Alden points out, may have been turbo-charged by a frightening situation that would have led Tchaikovsky to identify with the confused and increasingly desperate Lisa. Some years earlier, the composer had married, most ill-advisedly, a young woman named Antonina Milyukova who had pursued him by letter. He was gay; she was mentally unstable; disaster ensued. “He had got her out of his life, but she returned and started to make trouble for him,” Alden says. “She flipped over something petty and started threatening to expose him. He fled to Italy in order to write this piece.”

Hermann is in love, at a distance, with Lisa; he pursues her like a stalker, uses her blatantly to access the Countess, and finally drives her to suicide. His obsession transfers to the old Countess and her secret of the three cards. “It’s very Freudian,” Alden suggests. “There’s a triangle of him and the two women, and it turns out the real erotic zinger of the opera is between him and the Countess: his horror of her, his desire for her and the cards.” The setting of St Petersburg becomes virtually a character in its own right, “an aristocratic milieu with decadence and corruption only just under the surface”.

It sounds all too contemporary – but the psychological element remains timeless and universal. “It is very non-literal,” Alden says, of his new production. “It’s a weird, beautiful, dreamy thing.”