More of a quick march than a dance, really, but I've just spent 24 hours in Budapest, where I went to meet a remarkable and highly creative musician. Those who are not only conductors but also composers, creators, communicators and founders, with an instinct for the big picture and an ability to build audiences at a time like this, are, to put it mildly, few and far between. I've often written here about the joys of listening to the Budapest Festival Orchestra, and I've talked briefly to Iván Fischer before, but this was my first in-depth interview with him and I look forward to bringing you the finished piece when it's out. He and the BFO will be in London in May to perform The Magic Flute at the Royal Festival Hall.

Budapest is, of course, full of music and tributes to its musicians. Here's the latest new memorial: to Sir Georg Solti, outside the lavish Art Nouveau marvels of the Franz Liszt Academy. 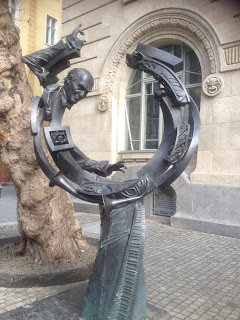 Liszt Ferenc himself, naturally, gets everywhere. I paid a happy visit to the Liszt Museum, in his apartment just off Andrássy Street, where one may view several of his pianos - including one by Chickering & Sons with 'Franz Liszt' inscribed in inlaid wood, with a giant wrought-silver music stand glorifying said musician. Downstairs is the dedicated Liszt Research Centre.

In my perambulations around downtown Pest I saw more statues of Liszt than any other individual - and the airport is named after him, too (how about renaming Heathrow Henry Purcell Airport, chaps? Perhaps that wouldn't be fair to Purcell...). This bust of him is simply a fountain on a street corner between the Basilica and the Danube... 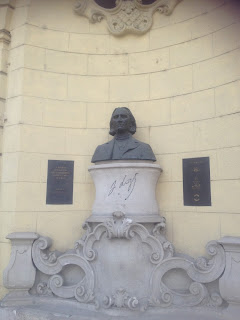 Here is a plaque to Joszef Joachim, who lived in a big and beautiful late 19th-century apartment block with ornate marble and curved windows, near the start of Vaci Street (the main pedestrian shopping street) and about one and a half minutes from Gerbaud's - the gorgeous big coffee house that offers some of the best cakes I've ever had, as I remember from my last visit some seven or eight years ago in the days when I could still eat them. 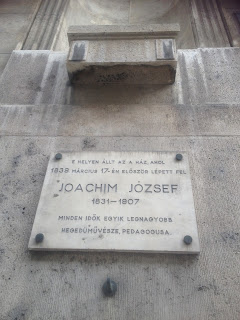 I also found myself by accident on the street where, according to the one extant biography of her and her sisters, Jelly d'Arányi was born - Wesselényi Street, which is right beside the magnificent synagogue of Dohány Street.

There's a cat café in Budapest and I didn't have time to go there, but I'm now wondering if there's perhaps room for another...with gluten-free specialities and a family of resident Somali kitties and a Gypsy band to play every weekend... I even found a Ricki lookalike in stone on the Chain Bridge... 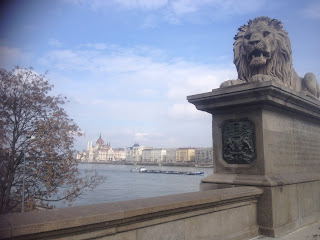 In a brief visit like this, you see only the superficial enchantment of a place like Budapest. A local journalist friend recommended a restaurant round the corner from the opera house (the theatre itself has an extraordinary fairy-tale foyer, full of colour and mosaics and soaring staircases) and after a feast of pomegranaty duck and a glass of local wine I took a long stroll through the centre of the city to see the Beautiful Black-and-Gold Danube. 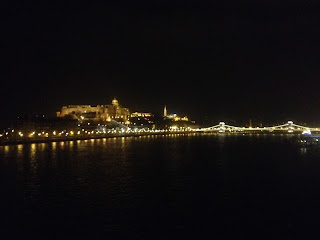 One thing disturbed and slightly unnerved me, though: I didn't see any Roma. Violinists or otherwise. When I visited Budapest to research Hungarian Dances about ten years ago, no street corner was complete without a busker; indeed, wherever you went, you'd hear a violin somewhere, with the sweetness, gentleness, sparkle and slidiness so characteristic of Gypsy style. I remember a pair of musicians, clad in the trademark waistcoats and hats, busking on the square close to Gerbaud's, clarinet raised and hornlike, fiddle rhythmic and irresistible. Now: silence. Then, you'd find the Roma women in headscarves and long skirts, their faces weathered, their eyes deep and somehow knowing, begging near the tourist spots and along Andrássy. But this time I encountered not one. I would like to know what has become of them and I don't think it's the weather; this was a spring-like visit - about 11 degrees and warmer in the sun yesterday morning. Budapest without its "Gypsies" is missing a part of its soul.