First thoughts on the first Culture White Paper in 50 years... 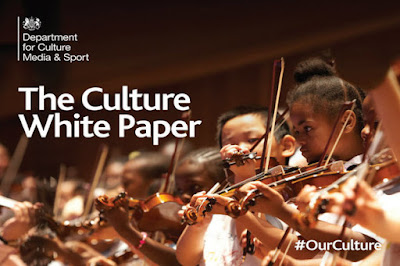 The government has published its first White Paper on Culture for more than 50 years, only the second one ever, and it is full of good stuff. Unfortunately, an adequate resemblance of its contents to the picture on the ground has thus far passed me by.

There are BME children playing violins on the cover, a trendy stakeholder hashtag #OurCulture, quotes from Shakespeare, strong words about inclusiveness, an insistence that every child should have the opportunity to encounter culture both in and out of school. There is, too, a thing called 'GREAT Britain' which seeks to increase the UK's 'soft power' in the world in general, through the impact and repute of its cultural life. Culture is the third most important concern for those wishing to visit the UK, it seems (only 17% of people cited the weather as an attraction), and the figures of its worth to the economy are writ large, in pink.

The good news is that a reasonably convincing attempt has been made to quantify the true value of culture - to the economy, to society, to people's quality of life, to our health, to the country's world standing and more. It's a difficult thing to pull off, but they have managed it, and done so with clarity, if not with a huge amount of detail as to how they intend to achieve their objectives, beyond working with the right people and organisations in such areas as diversity and devolution.

It is brilliant to see this being recognised at government level. But what is said, and what actually happens, still seem dangerously at odds. Try this, re public libraries:

Public libraries are an important part of our local communities. The Leadership for Libraries Taskforce was established in 2015 by the government and the Local Government Association. Its objectives are to support collaboration, best practice and development across England’s public library service.


Oh yes? Did you know that several hundred public libraries have been forced to close in the past 5 years? Have a look...

The single biggest problem we're facing here, I think, is a lack of joined-up thinking. You can't make something happen by waving a lordly hand and saying "Make It So". It's fine to trumpet high ideals, but you cannot simultaneously cash-starve the local authorities that you expect to deliver them. They also have to take care of the elderly and the sick, organise rubbish collections, collect parking fines and find enough places in schools for local children, among other tasks. Many of them have been forced to slash their arts budgets because they simply can't afford them any more. For instance, an orchestra on tour or playing in residencies up and down the country may find that when once they were guaranteed a fee for a local appearance, instead they have been asked to share the risk with the local authority that runs the hall in question, and some are now being asked to shoulder all the risk if they want to keep playing there. Which they can't. And local authorities are closing libraries because they can't afford to keep them going.

A spirited response has come in from Deborah Annetts, chief executive of the Incorporated Society of Musicians. She, too, has homed in on the gulf between ideal and reality - in particular, where provision of music in schools is concerned, and where intellectual property issues need to be to the fore. She says:


‘We are delighted to see the Government re-state its real commitment to music and the wider cultural sector. It is clear that Ed Vaizey and the wider Department really understand the importance of the creative industries to our economic success; something also recognised by the Chancellor George Osbourne.
‘We particularly welcome the recognition that there is a need for “facilities that allow artists to develop and create new work”, something that will be of critical importance in supporting new composers and performers.
‘We are however concerned that this White Paper stands in isolation from the wider ecology of the cultural sector. The absence of a commitment around creators’ rights and intellectual property – something that lies at the heart of our profession – is particularly notable.
‘Likewise, the investment in music education hubs and the Mayor’s Music Fund in London continues to be welcome, but music delivered as part of the curriculum in our schools is increasingly under pressure. With a newEnglish Baccalaureate (EBacc) replacing theold EBacc, the future of the arts subjects in schools and in the classroom is at risk. This is where the skills and talent pipeline of the future come from, the entrepreneurs, micro and small businesses of the future and it is an enormous cause for concern for the future of the creative industries.’

No doubt a lot more responses will be turning up before very long.