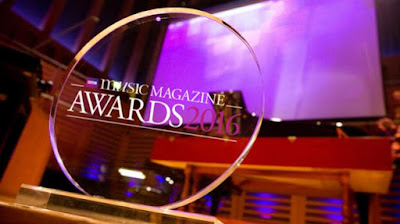 The most touching moment of the BBC Music Magazine Awards, held last night at Kings Place, was when the Instrumental Award winner took the platform. Cellist David Watkin received his prize for his CD of the Bach Cello Suites from the hand of Sir John Eliot Gardiner, in some of whose orchestras David was lead cellist for around 20 years.

What was left unsaid was that this immensely-praised CD has had to be his last; in summer 2015 an autoimmune condition called scleroderma forced his retirement from the instrument. He continues to blaze across the early music skies, though, as conductor and devoted teacher.

In his acceptance speech he made the powerful point that if our field of music is to continue at all, we have to educate as many people as possible about it; and he gave his own children a special thank you. Storytelling, he said, is the single best preparation for giving a good musical performance, especially reading aloud to kids. His two have been treated to his rendition of the whole of Narnia and Lord of the Rings. "If you want to prepare, find some children and read to them. And do the voices!" he advised.

He accepted the award, too, on behalf of all undersung continuo cellists, those beings who often find themselves standing in the rain after playing every note of a long oratorio while a soloist who's sung for ten minutes of it swooshes by in a limo, splashing them as they go...

Just one highlight, there, of a terrific line-up to celebrate the best and most honest music-making on CD. Other winners included conductor Sakari Oramo, two of whose discs were nominated in Orchestral, and who won for his Nielsen Symphonies Nos 1 and 3 with the Royal Stockholm Philharmonic; Rachel Podger and Brecon Baroque for their Vivaldi L'Estro Armonico; and the splendid young Schumann Quartet were there to perform a piece of Ives from the disc that scooped the Newcomer of the Year award.

Rosalind Plowright accepted the DVD award for Dialogue des Carmélites from Paris, directed by Olivier Py; she remarked that she was the only British cast member in a line-up of leading French singers as the doomed nuns, and had been asked to audition for the role to make sure her French was up to it. "I got the job," she declared. Record of the Year was the winner in the Opera category: Aida, starring Anja Harteros and Jonas Kaufmann, conducted by Sir Antonio Pappano. The fabulous baritone Ludovic Tézier stepped up as the cast's representative to collect the prize.

A special plaudit to the choir Tenebrae, who won for a disc of Brahms and Bruckner motets that was recorded in support of Macmillan Cancer Care. They were there and sang Bruckner's 'Christus Factus Est', and very gorgeous it was. We should all buy that CD.

You can see the full list of award winners and hear extracts from the discs here.

Many of the guest award presenters - including Ed Balls, Clemency Burton-Hill and James Naughtie - reflected on how playing the piano in public had proved far more frightening than standing at the dispatch box or broadcasting to three million people on the radio. But one award was presented by "Dr Christian" - the medical presenter of such popular-health TV programmes as Supersize Versus Superskinny - who made an impassioned speech about how important music is to him, and to so many of his patients as a veritable medicine for healing. Indeed, he thanked the music profession from the medical profession.

A beautiful evening, all in all, and one that left a tug at the heart. You realise the impermanence of things. You realise the dedication, effort, time, vocation and sacrifice that goes into the making of music and the vital nature of its support for our souls. It takes so long to build up that expertise and the structures that support its existence. It can all be swept away in the stroke of someone's pen. We can't let that happen if we want future generations to experience the joy and life-enhancing beauty we've been lucky enough to have ourselves. In Canada Prime Minister Justin Trudeau has just earmarked nearly $1.9bn for culture and the arts. Here, though, music education is fighting for its life and entire communities stand to be deprived of it and of the performing arts due to local authority cuts. And meanwhile, this is happening... Let's get a grip now, once and for all. Factory reset of human values, please!
Posted by Jessica at 8:38 am