The American academic and violist Edward Klorman, a professor at the Juilliard School in New York, has written a truly beautiful book about Mozart's chamber music, exploring the conversational exchanges the composer's writing seems to evoke and its lineage among Enlightenment ideals: Mozart's Music of Friends: Social Interplay in the Chamber Works (just out, from Cambridge University Press). It makes me realise how very far society seems to have fallen from such things, and how wonderful they are, and how we should start aspiring to them again, right now, this minute.

I've done an e-Q&A with Edward about his book. I hope you will love these ideas as much as I do.

JD: Your book Mozart’s Music of Friends examines the interplay within chamber ensembles using the metaphor of social interplay. How did you begin exploring this topic? 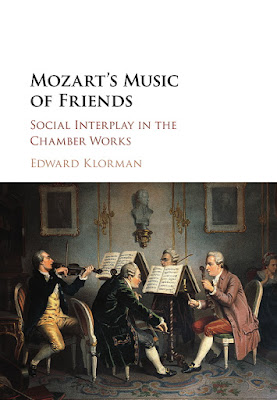 EK: During my studies at Juilliard, I had some opportunities to study chamber music with violinist Pamela Frank and pianist Robert Levin at various festivals. I remember vividly some of the images they invoked in their coachings. Pam would describe a violin singing a beautiful melody when the viola pokes in to interrupt or to tease. And Bob would point out how one instrument “changes the subject” from a serious fugue to something more light-hearted, or how another instrument introduces a certain accidental that urges the others to modulate to a particular key.

This way of treating each instrument like a character seems to be so intuitive to many performers, but it’s somehow not something most musical scholars tend to write. Perhaps this is because a player literally enacts just one of the instrumental parts, whereas a music analyst adopts an omniscient, outside vantage point. This book aims to bring the scholarly and performance perspectives together. By examining the historical and theoretical underpinnings of performers’ experiences of this repertoire, I’ve united two parts of my musical life.


JD: Could you explain the title Mozart’s Music of Friends?

EK: This lovely phrase is borrowed from a 1909 lecture by Richard Henry Walthew, a British composer and chamber music aficionado. Chamber music is fundamentally a music not just for friends but of friends. Its natural habitat is the drawing room, where it was played among friends in intimate settings, but even when it is played in large halls, the music reflects its sociable ethos
through the way the musical parts interact with one another. We become friends just be playing or listening to it together.

This is a traditional idea. A German preacher, who wrote an essay about string quartets in 1810, observed: “Those who ever drank together became friends [but] the quartet table will soon replace the pub table. A person cannot hate anyone with whom he has ever made music in earnest. Those who throughout a winter have united on their own initiative to play quartets will remain good friends for life.”

JD: It was Goethe who famously described Beethoven’s quartets as resembling a conversation among four sophisticated people. Was this his original idea?

EK: That Goethe quote is an oft-cited expression of that idea, but the comparison dates back to the 1760s, around when string quartets first became popular. And it makes a certain sense, since four instruments with similar timbres resemble the sound of four conversationalists.

Parisian quartet publications dating from this period often used the title “quatuors dialogués” — literally “dialogued quartets.” To compare chamber music to conversation was quite a compliment, since the Enlightenment regarded conversation to a highly refined art form. Whether a group of friends and familiars socializes through conversation or chamber music (or perhaps both at the same time!), the interest is on the witty exchanges and liveliness of the repartee.

JD: How would you compare settings for chamber music performances in Mozart’s period vs. today?

EK: This is an interesting question, but a complicated one. To begin with the words “performed” and “concert”: These words are tricky in historical documents such as Mozart’s letters. The German word “Akademie” sometimes describes a public, subscription concert in a theater, but it can also refer to a private gathering in a salon in someone’s home, possibly with some listeners (“audience”) but just as likely with no one else present. In paintings and drawings from the period, you sometimes see what looks like a soirée or party setting, with guests chatting (and half listening) as the musicians play. The musicians were often arranged in a circle, playing inward toward the other musicians rather than directing their performance outward toward attentive listeners.

In a letter to his father, Mozart describes a four-hour-long “Akademie” he played at an inn where he was staying. The gathering lasted four hours, and Mozart played with a violinist he’d only just met that morning – and who turned out to be a rather lousy sight-reader. (“He was no good friend of the rests!” wrote Mozart.) The impression you get is that the guests at the inn were basically just socializing, while music was being played, rather than listening with full attention as a formal audience. As one of my musicologist colleagues nicely put it, music could simulate artful conversation, but in salon settings it also served to stimulate it.

JD: Tell us about the companion website for Mozart’s Music of Friends?

EK: The website (www.MozartsMusicOfFriends.com) is fun to explore either together with the book or as a standalone resource. There’s a large trove of paintings and drawings that give an idea what it might have felt like to attend these musical salons. And there are videos that allow you to hear the musical examples while watching explanatory animations. Appropriate for “the music of friends,” those videos include musical performances by a number of my close friends and colleagues, so it was a real treat to play together with them as part of the project.