Schumann's anniversary, and a spot of Brahms


Today is the 160th anniversary of Robert Schumann's death.

This is the house - the former mental hospital - in which he died, in Endenich, on the outskirts of Bonn, as it looked a few years ago. Its ground floor now houses a music library; Schumann's rooms, upstairs and at the end of the landing, are a museum, which includes the tiny bedroom in which he died, overlooking a peaceful garden; there's a small piano, a covering for it which belonged to Liszt, and pictures and memorabilia of Clara, Joachim and Brahms. Clara was permitted to see him again only the day before his death. 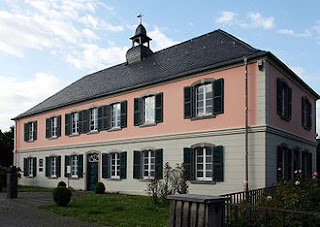 Looking back through the Schumann, Brahms and Clara books on my shelf always turns up some new gem - and today, dipping into Johannes Brahms: Life and Letters, selected and annotated by Styra Avins (this is my 'Brahms Bible'), I stumbled over the information that at a memorial concert for Schumann soon after his death, Brahms himself was the soloist in Schumann's Piano Concerto. There are a few moments in musical history that make me long to time-travel, and that's one of them.

One thing you will find in Ghost Variations (named after Schumann's Geistervariationen, which shares a germ of a musical theme with the Violin Concerto's slow movement) is a brief exploration of how Brahms reflected the cyclic theme of Schumann's Violin Concerto in his own - despite the latter having been written more than 20 years later. It's quite useful to have a musicologist as a character in this sort of novel: in this case, Donald Francis Tovey. If he were around today, his insights would of course be much more profound than that. But this reference is an under-recognised element of the Brahms work, although Yehudi Menuhin spotted the connection as soon as he first set eyes on the Schumann, and it seems worth pointing up a little.

Here's the first movement of the Schumann, played (quite fast) by Henryk Szeryng. Listen for the second subject: this is the theme that transforms, twisting itself through the textures of the second movement and then shape-shifting into the final Polonaise.