9 of the best musical ways to mark International Women's Day

International Women's Day, 8 March, has risen to become a big deal in music programming these past few years - championing, not before time, the creativity and achievements of women musicians over the years, decades, centuries, often, and still often, against the odds. Here are a few highlights of the celebrations taking place around Britain this week. 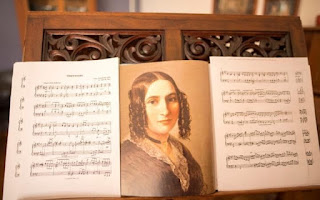 • The UK premiere of Fanny Mendelssohn's 'Easter Sonata' when Sofya Gulyak plays it on Wednesday. BBC Radio 3 will be broadcasting the performance live from the Royal College of Music at 1pm. The formidably gifted Sofya Gulyak is the only woman ever to have won first prize in the Leeds International Piano Competition. More about the sonata - which was mistaken for a work by Felix for years - and Fanny's 4xgreat-granddaughter Sheila Hayman's efforts on its behalf here.

• Plenty more on BBC Radio 3 this week for International Women's Day: they are playing only music by women on Wednesday 8 March. Catch up on new recordings of music by women with Alexandra Coghlan on Record Review, and an exploration of the works of Dame Ethel Smyth from Kate Kennedy. Now available on the iPlayer. And Composer of the Week is Barbara Strozzi. This is all part of some very welcome, intensive programming focusing on female composers. Full listing for Wednesday here.

• The Southbank Centre's week-long Women of the World Festival launches on Tuesday 7 March, celebrates women's achievements everywhere and surveys the obstacles that still keep them from fulfilling their potential. Musical highlights include the Women of the World Orchestra conducted by Jessica Cottis at the annual Mirth Control evening hosted by Sandi Toksvig. More here. 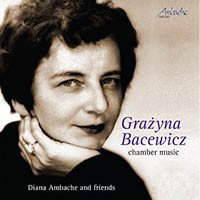 • Diana Ambache, head of the Ambache Charitable Trust which offers grants to aid the promotion of female composers, has started a record label and the third release is being launched on Wednesday. It's chamber music by the fabulous Polish composer Grażyna Bacewicz, including the Quartet for Four Violins, Trio for Oboe, Violin and Cello, Theme and Variations for Violin and Piano and more. Details here. More to read from Diana on the topic of women composers here.

• Hull University has a full day of events for IWD and as part of this a tribute to Pauline Oliveros is being given in a 4pm concert of her works. More details here.

• Cardiff, Hoddinott Hall: The BBC National Orchestra and Choir of Wales under its principal guest conductor Xian Zhang presents the world premiere of a new choral work, Speak Out, by Kate Whitely, which sets to music the 2013 speech by Malala Yousafzai about the right of every girl to an education. It's a commission from BBC Radio 3. In the same concert the remarkable Latvian Skride sisters, Baibe and Lauma, play Mendelssohn's Double Concerto for violin and piano and the programme ends with Zemlinsky's fairy-tale tone-poem The Little Mermaid. More here.

This are just a few selections, with a classical focus - there is much, much, much, much more out there for IWD in many different genres and countless spheres. And you can even go and hear music by men if you prefer. While the day-long celebration is snowballing into a week, sometimes longer, the challenge now is for women's music and musicianship to be celebrated not only in one patch per year, but across the board, all the time, to the point that special celebrations are no longer needed because equal representation will be a no-brainer, something that would simply be taken for granted. The more women are writing music and giving performances, the better for everyone, because there will be more music of still greater range, offering us all even more choice and even higher standards. Meanwhile, it's worth remembering that forecasts now say the gender pay gap won't close until the year 2186. That's how far we still have to go.