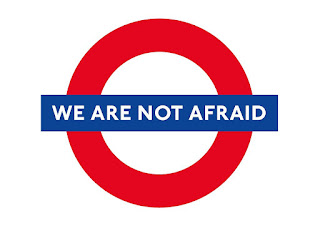 I'm a Londoner. I was born in Whitechapel, grew up in north London and now live south west near the end of the District Line. Tried to leave a few times, but always boomeranged straight back. It's a resilient place, full of hard-headed and capable people and the day after 7/7, the Tube bombings, a lot of us got straight back aboard to go wherever we needed to (in my case, the Wigmore Hall), knowing that was the best way to cock the proverbial snook at those who would threaten us. You don't let them. I was a child during the 1970s. The airwaves were full of stories of IRA terrorism and I was scared. My parents used to tell me not to be afraid, because that was what the terrorists wanted. If you refused to be terrorised, they couldn't win.

Times change and today London is a mass of paradoxes. It's richer and poorer all at once, home to both an unconscionable number of billionaires and also too many with nothing at all, sleeping rough in Strand doorways and Hyde Park Corner subways. It's a flourishing cosmopolitan melting pot that now risks crazy damage to itself through xenophobia. A futuristic hub of progress and technology sold on the legend of a misapprehended past. A home of some of the world's finest literature, theatre and music that often seems determined not to celebrate its own achievements. But it's still London, it's still home and we will always find ways to make the very best of it, despite anything.

After a hideous attack that has left four people dead and many injured, finding suitable music for contemplation can feel like a tall order. The LPO concert last night at the Royal Festival Hall was cancelled, apparently due to a police directive. My resident violinist was downhearted, having been psyched up to play Bruckner 9 and regarding "keeping calm and carrying on" as the best response. Several times during the evening we considered Dame Myra Hess and the National Gallery Lunchtime Concerts during the Blitz, not that the situation was comparable. Yet this too is about music as assertion of a shared humanity that is greater and stronger than any threats against it.

Here's what I've found for today, then: Eric Coates's beautiful meditation on Westminster itself.