Silver Birch: We are all connected


It's all happening. On Saturday I went along to High Wycombe to see a rehearsal of Silver Birch for the first time. The Garsington Youth Company and some of the Adult Community Chorus were in extremely fine fettle and working their socks off, together with the Garsington music staff, the repetiteur, our director Karen Gillingham, the designer Rhiannon Newman Brown, the Foley team from Shepperton Studios, our producer Kate Laughton and many more. I came back reeling a bit.

I'm a novice librettist. OK, I've put together other words to be sung or acted, but this is the first time I've been involved in a complete, fully staged, top-notch, bells-and-whistles creation of a whole brand-new opera. And of course if you've been going to operas for more than 40 years and writing about them and reviewing them for half of that, you think you know what it takes. Or...er...maybe you don't.

Here's a little of what it's really taking to make this opera, after it's been written. This is leaving aside the devising process, the research, the writing, the composing - more of that another time.

The singers have to learn their roles. That may sound obvious, but it includes, for Silver Birch, a lot of young people and amateurs, and they have been rehearsing every week since the new year. They've all been auditioned. They had to prepare for those auditions and some who prepared for the auditions would have been rejected and would have been disappointed, and people had to audition them and make those decisions and tell them who was in and who wasn't.

The soloists - whom I haven't yet seen in action - have to get to grips with brand-new roles while also being busy with whatever else they're singing at the moment - for instance, our leading lady, Victoria Simmonds, is currently singing Donna Elvira in Don Giovanni at Opera Holland Park. Our conductor, Garsington's music director Dougie Boyd, has his hands full conducting The Marriage of Figaro. And don't get me started on what language orchestral musicians use while practising, at home, a new work they've never seen or heard before.

The director, Karen, has to map out the drama and then rehearse it all. The choreographer, Natasha, is in charge of a small group of brilliant youngsters who suddenly launch into breakdancing in the middle of the drill scene. Rhiannon has to find a way to make the silver birch tree grow, among much else. During the course of the rehearsal, the adult community chorus members are summoned one by one for costume fittings - someone has to make those costumes. 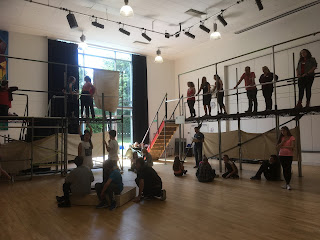 The adult community chorus members are devoting lashings of time and effort to taking part. One of them happens to be Siegfried Sassoon's great-nephew (he was a great help to me in the background research for the opera) and for much of the time he is standing pretty much next to where Bradley Travis will be portraying Sassoon, or at least his ghostly presence.

The music staff are working flat out. Suzy Zumpe leads the music side of the rehearsal, teaching the youth company how to memorise the tricky details of Roxanna's score. "Nothing can grow in this soil" is a line that returns several times, the last note held a different number of beats on each occasion - she finds a trick to help them remember how many and when. And she sings all the female soloist roles herself when they need filling in, with her sidekick Patrick singing all the male ones and the repetiteur, James, bowling along through the piano score.

The stage manager and assistant stage managers are zipping around moving the post that represents the silver birch, adjusting markings, constructing and deconstructing things, and someone has already erected the substantial skeleton two-level set in this school hall. Cups of tea materialise, kindly brewed by one of the assistants. Someone has brought food for the staff's lunch, plus sustaining snacks. One person remarks that during the course of this week they've eaten their body weight in dried fruit. 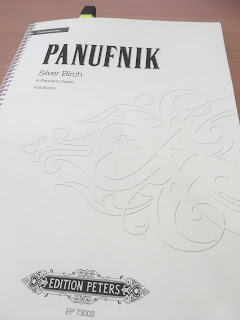 Everyone has to get there and back. Rhiannon has been stuck on the M25 for hours. The team of three Foley artists (aka our sound-effects gurus) have come up from Shepperton, been to Wormsley to have a look around the theatre and now have come to High Wycombe to see how they will be integrated into the battle scene. And at this point Patrick absolutely excels himself as stand-in sound effects, doing fighter jets, machine guns, mortars and more with vocals alone.

The full score is spread out on a table, a giant publication that has had to be created, proof-read and printed. So has the piano score - the chorus members clutch copies printed with the magic name PANUFNIK in big letters on the front. Someone at Edition Peters had to organise all of that. Every rest, every semiquaver, every word has to be in the right place.

Natasha, who runs a small dance company that specialises in traditional folk dance as well as youth work, can see everyone is knackered and leads a cool-down session at the end of the afternoon. Now the kids' parents are presumably going to have to come and pick them up - indeed, a couple of proud mums have been watching the proceedings for a while. Meanwhile Kate has to organise absolutely every practical detail of absolutely everything, yet seems utterly unflappable and even finds time to drop me back to High Wycombe station.


I do have to take notice and learn some lessons. It's too late to change anything in my text, but I've now twigged that it's really, seriously not a good idea for singers to have a word ending in "t" directly followed by one beginning with "d" and that a few unintended consequences can include the command: "Let's go from 'Driblet'". The kids are unfazed by this, but I quietly sink through the floor.

Over at Garsington, it will be all go, too. People have to work the booking mechanisms, send out the tickets, tell people about the trains, set out the picnic tents, stock the bar, direct the parking. The audience has to find its way to Wormsley. Will they come out at the end singing the Silver Birch Song? I think so - I can't get it out of my head.

We are all connected. All these people, hundreds and hundreds of them, are connected by the one purpose of making this new opera reality. Everyone is connected. Everyone could potentially have their life changed in some way by this thing. To say "we're all in it together" is not enough. This is not a "community opera": it's a community. To stage any opera would mean creating a community, even if the opera has existed for 400 years. This one happens to be new. And it happens to be ours.

I'm not sure I'll ever be quite the same again.

Silver Birch by Roxanna Panufnik is on at Garsington Opera on 28, 29 and 30 July. Get your tickets here.