When I glanced down at the carrier bags and saw the two gigantic volumes of score, I realised the chap next to me on the Glyndebourne bus was none other than the composer of Hamlet, Brett Dean. "Why Hamlet?" I asked. He grinned: "Why not?"

Hamlet should be a gift for any composer - glorious soliloquies, poetry known to the entire land if not the whole world, a story of bottomless depth and endless possibilities for reinterpretation. It's not as if nobody has set it before: if I remember right, there are around 14 earlier versions, with Ambroise Thomas's effort the best known (though as Saint-Saëns said, "There is good music, bad music and the music of Ambroise Thomas...") Brett Dean's humongous new work for Glyndebourne, though, seems set to shred all competition into musical flotsam and jetsam.

One thing you cannot do if you're turning a play like Hamlet into music is treat it with kid gloves. Dean and his librettist, the distinguished Canadian director Matthew Jocelyn, haven't. They have used only about a fifth of the actual play: Jocelyn has taken it to bits, reassembled it, restructured, redepicted, redreamed. After all, it takes, on average, about three times as long to sing a word as to speak it, so if you set every last line of Hamlet you'd end up with about 15 hours of opera. It would be possible to do it in other ways, retaining more of the poetic monologues which here are often boiled down to a mere handful of lines. But then something else would have to give; one might lose the grand sweep of the dramatic total, the ensemble work, the sonic colour with its imaginative flair.

Although you may find your favourite moments are missing ("Alas, poor Yorick" is in, but "To thine own self be true" is not) the work is masterfully structured. The impression, musically, is rather like a giant symphony of Mahlerian proportions plus some; dramatically it is full of different levels, new insights, magnificent company challenges and a vivid variety of pace and richly explored possibilities.

The opera's scenes seem to correspond roughly to the movements of a symphonic work in which the intensity rarely lets up. First, an opening dramatic exposition with slow introduction - Hamlet mourns his father at the graveside before we plunge into Gertude and Claudius's wedding party, at which the prince is drunk and disruptive; and the arrival of the Ghost, all the more chilling for the tenderness between Hamlet and his dead father.

The second main section opens almost as a scherzo, with Rosencrantz and Guildenstern played by two skittish countertenors, and culminates in the play-within-a-play - lavishly decorated with a totally brilliant onstage accordionist plus deconstructed lines from Hamlet's soliloquy that pop in as self-referential touchstones. The 1hr 45min first act closes with the desperate confrontation between Hamlet and Gertrude and the murder of Polonius - a great central climax that leaves Gertrude psychologically eviscerated. We all need the long interval to get our breath back.

Next we turn to Ophelia's madness, death and funeral - an eerie slow movement, full of startling writing that includes a good proportion of the work's best and most interesting music. The dramatic pacing is notable here, building up to an absolute cataclysm as Hamlet cries "I loved Ophelia"; similarly cathartic is the multifaceted finale, with the sword fight and multiple murders that nevertheless retains Horatio's determination, as the match is agreed, to up Hamlet's quota of prize horses to 11. The rest is...silence.

The opera has been planned with Glyndebourne's auditorium in mind. A group of singers take their places in the orchestra pit - and sometimes in the balcony - being used, effectively, as instruments.  Indeed, almost everywhere you look there are people singing, thumping instruments or doing strange things with unusual percussive gadgets... The LPO tweeted this image from the score: 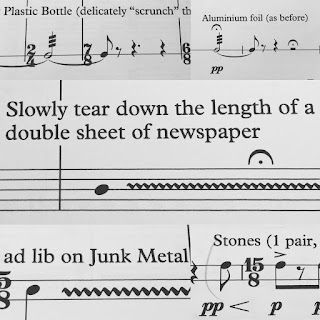 Electronics are subtly woven in, whether using sampled (apparently pre-recorded) extracts of the singers' lines or setting up atmospheric rumbles and roars. Even the more conventional aspects of the instrumentation are clever, clear, often ingenious; for instance, the countertenors of Rosencrantz and Guildenstern are aurally shadowed by two clarinets almost trying to edge one another out of the way. As for the designs, Ralph Myers places the action in a Nordic Noir type of design featuring shiftable Scandic white walls with huge windows; Alice Babidge's costumes are contemporary in style, which makes Claudius's crown look faintly ridiculous, but I suspect it's meant to be. Neil Armfield's direction is so organic a part of the work that it is hard to imagine it done in any other way.

To say that it's a superhuman effort, and not only for the composer, is not saying enough. Dean and Jocelyn have risen to the challenge of transforming the play with fearless aplomb, and in so doing have created giant roles for their lead singers.

Allan Clayton's Hamlet may prove the ultimate making of this rising-star British tenor. He is on stage almost all the time; we rarely see anything from anyone else's point of view. A doomed, bearlike desperado, he travels from agonised grief through madness real or imagined and out the other side to the fury of his final (expertly performed) sword fight with David Butt Philip's Laertes. It's a huge sing for this often classically-oriented performer - we have loved his Mozart and Handel although, most recently, he was pushing the boat out further as David in Meistersinger - and he proves himself not only in glorious voice but a master of the stage in every way. For Barbara Hannigan's Ophelia, Dean has created ethereally high, dizzyingly complex arabesquing lines, offset by Sarah Connolly as a persuasive Gertrude, hard-edged in character but mellifluous and radiant of voice. Sir John Tomlinson is the Ghost, as well as the Lead Player and the Gravedigger - an intriguing alignment of the three figures - and owns those scenes with his outsize presence and sepulchral tone. 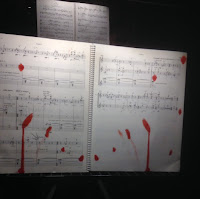 The chorus frames the action with plenty of impact, plunging into "Laertes shall be king" to launch the second half with maximum oomph. There's also a rewarding plethora of smaller roles, luxuriously cast: Rod Gilfrey as Claudius, Jacques Imbrailo as Horatio, Kim Begley as Polonius and Rupert Enticknap and Christopher Lowrey as Rosencrantz and Guildenstern. As for Vladimir Jurowski's conducting, I doubt anyone else could have pulled this off even half so magnificently.

I am reliably informed that some of the stage blood found its way onto a first violin part in the orchestra pit. At least, I think it was stage blood. Pictured left...

You can see Hamlet in a cinema relay on 6 July. Other performances can be found and booked here, and we are promised that the opera will be included in the Glyndebourne tour, with David Butt Philip taking over in the title role.


If you've enjoyed this review...please consider supporting JDCMB's development over the next year by making a donation at this link: https://www.gofundme.com/jdcmb