I've been on musical travels in Leipzig this past week. The historic heart of the former GDR is also the historic heart of German music - second only to Vienna in its sites of pilgrimage for the classical continental traveller. Most notably, perhaps, we attended a beautiful service at Bach's Thomaskirche and went back on 31 October, Reformation Day, to hear a performance of Mendelssohn's Paulus in Bach's church.

The thing is, we heard it backwards.

The musicians are located in the substantial organ loft. Which is behind most of the congregation. So about two thirds of the audience sits with its backs to the musicians, and the remainder are sideways on.

Therefore there is nothing to look at while you listen - except your surroundings, the words in the programme and the inside of your own eyelids while you focus on your ears alone.

You benefit from the immediacy of the live experience of music-making. But you don't worry about what anyone looks like, what the soloists are wearing or whether someone is making excessive gestures (unlike some reviews of a recent performance of Rach 2 by a popular female pianist, most of which had to talk about what she was wearing and how she was moving, rather than how she actually sounded, and judged her adversely for the former). Instead... You just listen. You sit for two and a half hours on a hard wooden pew, without drinks, without a visit to the loo, trying to translate what you can of the German, and Mendelssohn just picks you up and carries you off with his drama, his élan, the blaze of light that is the voice of the Lord (women's voices, NB), and a ceaseless fount of melody. I loved every minute of it. 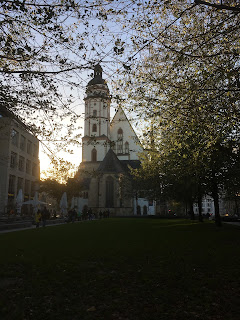 Bach's church is an extraordinary place in which to listen to music. The sound quality inside is resonant, but warm. The atmosphere is intimate, striking but never overbearing. Although Bach's grave has pride of place, this institution is a working, familyish, everyday, up-to-the-minute church, and clearly going to a concert there on 31 October is very much The Thing To Do (hallelujah, Halloween takes a back seat). The acoustic makes it clear that Bach's ensembles couldn't have been especially large, because the sound would turn muddy, and on this occasion it did take them two and a half hours to get through the Mendelssohn, without an interval, probably because the ratio of size to resonance slows things down.

Meanwhile, Leipzig really is a musical mecca. In a matter of days I've seen Bach's surviving churches and the fabulous Bach Museum, Mendelssohn's last home, Schumann and Clara's first apartment, the site where Clara spent much of her childhood (just a stone's throw from Bach's Thomaskirche), the great town hall where Bach signed his Thomaskirche contract, the outsides of the Gewandhaus and the Leipzig Oper, the sites of Wagner's birth and schooling, the historic headquarters of Edition Peters and the apartment in which Grieg worked on Peer Gynt and where, incidentally, Reger had his last dinner - he collapsed later that night...

We dined in the Auerbachskeller, where Goethe wrote some of Faust and where Brahms, Joachim and Grieg celebrated the premiere of Brahms's Violin Concerto; and had our last Leipzig meal at Zum Coffe Baum, which was conveniently rather empty so we could sit in "Schumann corner", where Schumann and his friends met every night from 1833 to 1840 (so the plaque says) to be the Davidsbündler together.

If you enjoy JDCMB, please consider supporting its Year of Development at GoFundMe.
Posted by Jessica at 11:28 am