Having recently experienced from the inside just what it is like to create an opera (it's rather like building the world's largest cruise-ship), I've been thinking about The Ones That Got Away. The operas that were never written. The operas that composers longed to write, but were never able to because they couldn't get the copyright or couldn't get the commissions or died before they could even begin. Here are a few of the works that might have graced our stages, but don't.

1. FAUST, by Wolfgang Amadeus Mozart. Goethe loved Mozart's music and stated that he would be the ideal composer to transform his Faust into an opera. Other composers were a bit too modern for his taste. The first inklings of Faust were published as Faust - A Fragment, in 1790. Mozart died before any prospect of it could become even a bit viable. Don Giovanni is probably the closest approximation...

2. WAITING FOR GODOT, by Pierre Boulez. The late French composer and conductor was widely rumoured to be planning an opera on Beckett's masterpiece, and I asked him about it in 2012. Indeed, the frail 87-year-old confirmed, he would love to write it if he were granted long enough on earth. Sadly, he wasn't.

3. Unnamed (I think) opera on a story by Ivan TURGENEV, by Johannes Brahms. In Baden-Baden,
Brahms was introduced to the Russian author by Pauline Viardot, the singer with whom Turgenev was obsessed for most of his life. Much socialising took place in the beautiful German spa town, Viardot's home, where she had a little theatre in the back garden, and Turgenev drafted a libretto for the composer. Unfortunately Brahms never set it. It told the story of a 40-something man who fell in love with a young 20-something woman, and it's possible Brahms took it a bit personally, since he had been pursuing his beloved Clara Schumann's daughter Julie about that time. Julie married a young man of her own vintage, but died tragically of tuberculosis soon afterwards; in her memory, Brahms wrote the Alto Rhapsody for Viardot to sing.

4. THE VICTORS, by Richard Wagner. It was going to be an opera on the life of the Buddha and Wagner sketched some ideas for it. But then he realised he had already written his Buddhist opera and it was Parsifal...

5. THE BUDDHA. Again. This time, words by Paul Verlaine, music by Gabriel Fauré. The Princesse de Polignac, one of Fauré's most important patrons, wanted to bring the poet and composer together to create an opera and Fauré set about tracking Verlaine down. He found him in hospital, succumbing to alcoholism. They talked about making an opera on the life of the Buddha. Fauré sketched him. But Verlaine's commitment to his drink proved stronger than his drive to write a libretto. In the end Fauré played the organ at his funeral. Nevertheless, he set Verlaine's poetry in some of his finest songs, including the Cinq Mélodies de Venise and La bonne chanson.

6. HIAWATHA, by Antonín Dvorák. When Dvorák went to America to run the New York Conservatory of Music, he was charged (by its sponsor, Jeannette Thurber) with the task of inventing a national style of music for the nation. Researching possibilities, he became fascinated by Negro Spirituals and likewise by the story of Hiawatha, in the poem by Henry W. Longfellow. He aimed to turn the poem into an opera and sketched some material for it. For some reason the board of the conservatory had to approve his libretto. And they didn't approve it. And this stopped him from writing the thing. Some of the music ended up in his Symphony No.9, in which form it is now ubiquitously famous.

7. REBECCA, by Roxanna Panufnik, libretto by muggins, based on Daphne du Maurier. A few years ago we tried for but couldn't get the stage rights, which had been recently awarded to a musical. It was a little bit heartbreaking. Never mind... we ended up creating Silver Birch instead. We have plenty more ideas, and you know where to find us.

8. SILENCE, by Poldowski. Unlike the others on this list, this 'symphonic opera' was both written and published (in New York sometime around 1920). So where is it? 'Poldowski' was the pseudonym of Irène Régine Wieniawska, daughter of the violinist and composer Henryk Wieniawski; after her marriage she was Lady Dean Paul. Her music is simply fabulous. Its non-existence today has nothing to do with its lack of creation.

9. DEIRDRE, by Arnold Bax, on an Irish story by WB Yeats. Fascinating stuff, this, sketched in part yet never fully realised. Read all about it here.

10. OSSIANE, by Marie Jaëll. A disciple of Liszt and a devoted pianist and composer, Jaëll was a 19th-century French musician unlucky enough to be born in an era when living for your art wasn't an accepted life approach for a young woman. She managed to do so anyway, though she seems to have suffered psychologically, and her music can be, to judge from what I've heard, a bit patchy. Still, this opera would be fascinating. It was written - but only extracts survive. The amazing Palazzetto Bru Zane has devoted a recording and accompanying book to some of her other works. More about her from the brilliant Song of the Lark blog here.

And last, but by no means least, the excellent Anne Midgette of the Washington Post, faced with new opera seasons in the US that look chiefly like Same Old with Some Stars, has tweeted her own ideal opera season: all of them splendid operas that happen to have been composed by women. Here it is, and hear hear to it all! 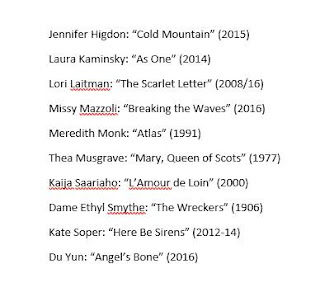 If you enjoy JDCMB, please support it here.